Nowhere will that be more evident than in the Virginia Folklife area, where this year’s theme is Feed Your Soul. Demonstrating that concept will be two soul food experts: Tina Ingram-Murphy, daughter of the late Richmond gospel legend Maggie Ingram, and Chris Brooks, lead chef at Petersburg’s Croaker’s Spot.

“As slaves, we made meals of the parts of the animal that were left over,” Ingram-Murphy explains of the food’s origins using ingredients such as pigs’ feet, chitlins and brains. Brooks calls soul food comfort food for people of color, saying, “Everything you were out picking in the field, you learned how to cook.”

The rest of the Ingram family does the singing these days now that Ingram-Murphy has retired to take care of her ailing husband, a change that left her plenty of time to hone her cooking skills at the feet of her mother and older family members. At the Folk Fest, she’ll be preparing a typical soul food supper of turkey, cabbage, mashed potatoes, collard greens, candied carrots and corn bread.

But unlike traditional soul food recipes, her dishes are prepared to promote wellness. 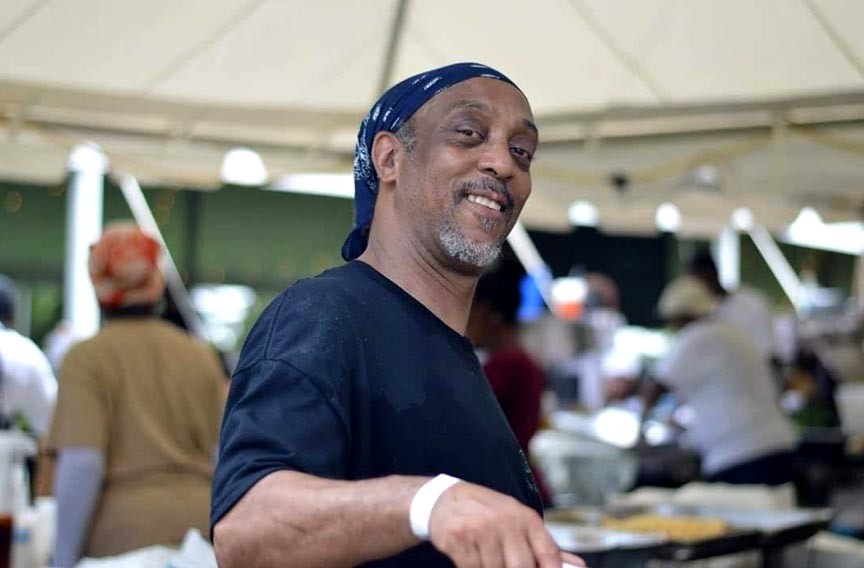 “In today’s society with social media, it’s easy to take stuff out of context and that’s how things like soul food get watered down and forgotten,” he says.

As for the music and food connection, Ingram-Murphy says that any time her family is working in the kitchen, it’s also singing. “When we all get together, there’s going to be music and singing. It all just goes together.”

A DJ since he was 14, Brooks admits he can’t cook without music in the kitchen.

“A sauté pan and a turntable are the same,” he explains. “Choosing ingredients to put in the pan is like pulling records from a crate. Either way, you’re making a mix tape. Soul food is comfort food.”