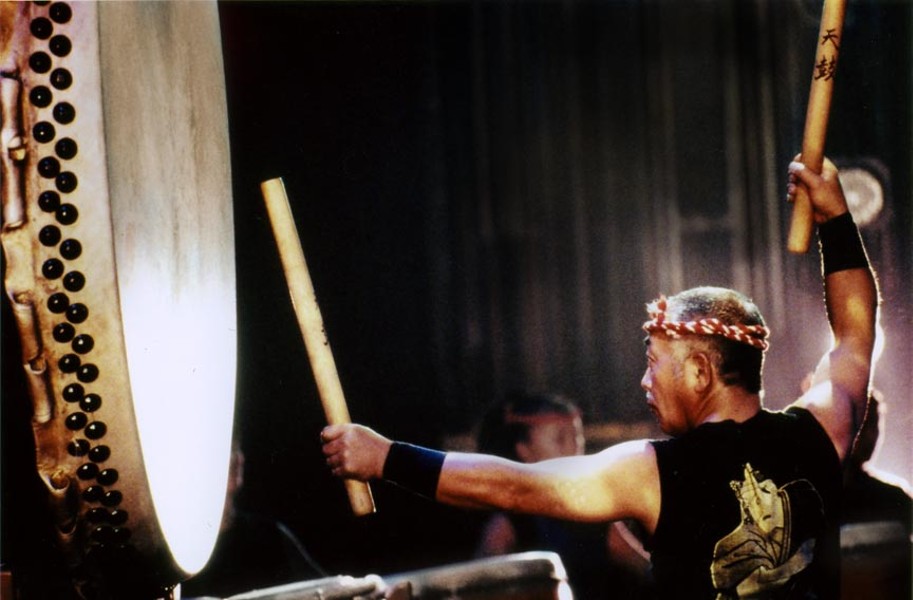 Among folk artists, taiko players might be the most full of adrenaline. Typical performances involve striking large drums with rudimentary sticks while dancing or shouting in choreographed fashion. In 1968, Seiichi Tanaka began using San Francisco as an American headquarters for this thunderous Japanese genre.

Today, Tanaka still leads San Francisco Taiko Dojo, and he’s considered the pre-eminent evangelist of taiko. To help out Tanaka’s traveling troupe, local players are lending their drums — and a few pointers for those who want to go in prepared.

“You can see the hard work oozing out of every pore,” says Paul Yoon about Tanaka’s shows. Yoon, a professor at Virginia Commonwealth University, says taiko flourished along a West Coast that was shaking off internment camp trauma. “They were in California, and they needed to make drums, so they used wine barrels. Taiko is a blunt instrument with no bounce to it. The patterns are super basic. You fill that in with dancing, volume and emotive quality.”

“Most of the taiko drums built in North America are made from staves,” says Alasdair Denvil, director of River City Taiko, as opposed to the Japanese method of hollowing out tree trunks. “During a performance, look to the positioning and size of the drums. The medium-sized drums, known as chu-daiko, will get the most use. One or two smaller drums will keep time. The bigger drums are a bit rarer.” Parties lending instruments for the Folk Fest performance include the University of Richmond, River City Taiko and a local artisan who makes her own drums, Denvil says.

The influence of American culture on taiko is complex. San Francisco Taiko Dojo made a cameo in the Wesley Snipes thriller “Rising Sun” and has appeared on various soundtracks, including “Return of the Jedi.” Fusion genres with tap dancing have cropped up, and Yoon points out that classic bebop was an early influence, hence the preponderance of soloing. No one’s there to police authenticity, he says, and that issue was largely settled after a Los Angeles taiko conference in 1999. A Japanese taiko musician came to the conference, demanding to be paid for a song that Tanaka was teaching and spreading across the country. The man also insisted people needed to be trained in Japan.

But no compulsory licensing exists today, and as long as attribution is respectfully made, taiko players can sample just like jazz artists and club DJs. One of Tanaka’s songs, “Renshuu,” has even been handed down to River City Taiko.

“Taiko in the U.S. is a very open, welcoming community,” Yoon says. “There’s always a sense of sharing and helping one another. I love that as much as the art form itself.”

Grand master Seiichi Tanaka and San Francisco Taiko Dojo perform on Sunday, Oct. 15, from noon to 12:45 p.m. and from 4:15 to 5 on the Community Foundation Stage. Tanaka will also be involved in World Beats: Percussion Masters on Saturday, Oct. 14, from 3 to 4 at WestRock Foundation stage.