2016 Richmond Photos of the Year

Looking back on the local images that resonated.

Photographer’s Note: One most interesting parts of this image is that the officers seem to ignore the presence of Shaver. It’s almost like she’s invisible, creating a serene moment during a raucous day where eight people were arrested.

Equine Competitor: Published Sept. 27. The State Fair of Virginia includes Kendall Lands, a 9-year-old from Gloucester. “I’ve been riding since I was about 6 months old,” she says. “This is my horse, Snowman. I compete in lots of the competitions. I just love horses.”

Photographer’s Note: As I wandered the fairgrounds looking for interesting characters to photograph and interview, I happened upon Kendall Lands, with her pink outfit covered with embroidery. It was high noon and the light was harsh, so I asked her to bring her horse under the awning of a nearby building. While she grabbed the lead and looked at me, Snowman looked away and everything came together. Kendall fits perfectly into the space at the horses’ shoulders, while Snowman’s perked-up ears, the geometric bars in the background, her hands on the lead and her expression make for a portrait of a happy young equestrian.

Wage Fight: Published Aug. 15. During the Fight for 15 minimum-wage protest rally in Richmond, Eric Hall endures 100-degree heat with thousands of other protesters. They marched from Monroe Park to the Robert E. Lee statue on Monument Avenue.

Photographer’s Note: Unlike snow or rain, intense heat isn’t easy to document. The thrust of the story was that thousands of people from across the United States were gathering in Richmond for the protest. But the oppressive heat seemed to dictate the mood of the marchers. Hundreds stayed under trees or sat down, while volunteers handed out bottled water. When I noticed Hall’s face, I thought I had an image that told both stories: intense heat and Hall’s resolve for the cause.

Sign of Change: Unpublished. A mayoral race sign remains in the Carillon neighborhood a week after the election.

Photographer’s Note: I was driving around the Carillon neighborhood trying to illustrate a story we were doing on the area when I noticed this sign. Once Jon Baliles dropped from the race Nov. 2, someone cleverly adapted the sign to fit another candidate.

Morrissey Carries On: Unpublished. The Richmond Times-Dispatch publishes allegations that mayoral candidate Joe Morrissey sent inappropriate text messages and made sexual advances to a client of his law firm. Morrissey held a news conference with his lawyer, Arnold Henderson, left, denying the accusations, calling for a retraction from the newspaper and pledging to continue his campaign.

Photographer’s Note: Morrissey was visibly upset during the conference and lashed out at Times-Dispatch reporter Ned Oliver, formerly of Style. Most of the other media representatives in attendance stayed silent while Morrissey and Oliver had a tense back-and-forth exchange. I was only a few feet away from Morrissey and framed this shot as he looked at Oliver.

Photographer’s Note: I was on a riser where I had a good view of the crowd. I could see Stoney coming a long way away with his signature smile. When he raised his arm to grasp hands with an admirer, I got this shot with a long lens.

Behind the Camera. Published July 23. Doaa Nour films the climate protest in the summer on Broad Street near Virginia Commonwealth University’s MCV campus.

Photographer’s Note: Amid the swirl of signs and chants, I noticed Nour in the center of protesters who were walking in a circle. She cut a striking figure. I found out later that Nour was one of the winners of American University’s Center for Environmental Filmmaking Challenge Prizes, for aspiring filmmakers who have overcome adversity.

Urban Deer: Published May 17. A small herd of deer becomes a jarring sight in the urban landscape of Union Hill. Four or five of them raced up the sidewalk of Venable Street, crossing 21st Street and proceeding up the center of the road on Venable.

Photographer’s Note: After photographing the owner of Roaring Pines home goods store for Style’s Best of Richmond issue, I stepped onto the sidewalk where I heard the clatter of hoofs coming at me. I jumped back onto the stoop as five deer blazed by. I was able to compose myself before the last deer, a young buck, leaped by. I know wildlife photographers would have a good laugh at this jumping-deer photo, but I think it’s a rare sight in the inner city.

Dominion Protest: Published Feb. 23. Hundreds of people gather on the Capitol grounds to protest Dominion’s plan to dump treated coal ash wastewater into the James River. After listening to speakers at the Bell Tower, protesters marched through downtown streets and back to the Capitol grounds, where dozens occupied the Capitol steps. Eight people were arrested.

Photographer’s Note: Having been present when the women’s rights protestors in 2012, where several people were arrested on the Capitol steps, I had a feeling it was about to happen again. At the previous protest, the Capitol police kept the media away from arrests. During the 2016 arrests, I shot from only a few feet away.

Dominion Protest: Published Feb. 23. Theresa Vogel, below, locks arms with others on the steps of the State Capitol during environmental protests against Dominion’s coal ash plans. She was one of the eight people arrested.

Photographer’s Note: Vogel, a wisp of a woman, was feisty and defiant during the protest. She didn’t go quietly when arrested. My attempt with this photo was to zero in on her expression and clenched fists.

Photographer’s Note: The East End of Richmond near Creighton Court saw an unfortunate amount of violence in 2016. One of the more chilling murders took place at Sam Market. At a vigil a few days later, I noticed one man who seemed to be in the state of shock. When I asked his name, he said “I am Sam,” and then walked away. I found out later that he works across the street at Community Food Mart and was a close friend Habeed’s, whom he saw every day.

Electoral College Protest: Published Dec. 19. Chrystal and Brendan Doyle stand outside the State Capitol on Monday in solidarity with electoral-college protesters across the country opposing the Donald Trump presidency.

Photographer’s Note: Of the 75 or so people holding signs and singing protest songs, this mother and son stood out. The elements that make the image work are their expressions and the mother clutching the American flag. They present a poignant portrait of family members braving the cold to protest the historic vote.

Thompson Tribute: Published Feb. 29. Performers from SPARC pay tribute to musician Robbin Thompson on a Sunday afternoon at the National. Thompson died in 2015 after a long battle with cancer.

Photographer’s Note: This was a touching moment during an emotional day where friends of Thompson’s from all across the country traveled to town for the tribute show. Local photographer Skip Rowland gave me a heads-up that the SPARC youth were coming onstage during the performance. With that bit of helpful knowledge, I was able to anticipate where to stand. Having Thompson’s image projected above the SPARC singers made for an especially touching moment.

Kaine Rally: Published Nov. 7. On the night before Election Day, longtime Richmond politician and vice-presidential hopeful Tim Kaine rallies supporters at the Richmond International Airport. More than a thousand people stood in the cold to hear Kaine speak. He went onstage around 11:45 p.m.

Photographer’s Note: Kaine appeared with his wife, Anne Holton, just before midnight. I lucked out and was chosen to shoot from the “pit” in the front of the stage with four other photographers. Kaine was fired up and in a great mood because many of his friends, his parents and family members from Ireland were in attendance. I couldn’t move around, but when he stood near the edge of the stage with his fist in the air and Holton in the background, I knew I had a solid image.

More Photos of the Year:

Slideshow 2016 Photos of the Year 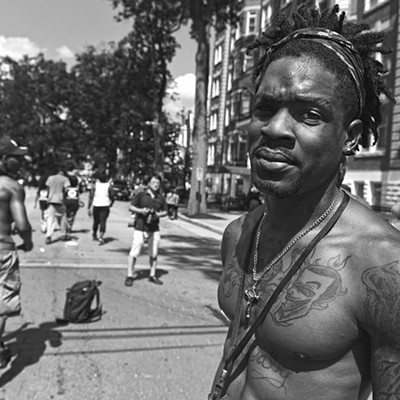