2015 Richmond Theater: A Year in Review

Style Weekly's theater critics converse about the ups, downs and mehs of 2015 — a year dominated by women on stage.

Richmond theater started with a roar in 2015. “The Lyons,” produced by 5th Wall Theatre Company — a pitch-perfect family dramedy — announced that this fledgling troupe started by the Firehouse’s former artistic director, Carol Piersol, would be a major player.

The months since have been filled with several big hits, a few misfires and a lot of shows in the mushy middle. Style’s theater critics, Rich Griset and David Timberline, look back and evaluate.

Timberline: Rich, in my mind, 2015 was a year of both good and bad surprises. Some highly anticipated productions, such as Virginia Repertory Theatre’s “South Pacific,” disappointed me. Others stunned me with unexpected delights — from an angel crashing through the set of the angsty teen drama “When Last We Flew” at TheatreLab to a darkly hilarious, spontaneous human combustion in Triangle Players’ “5 Lesbians Eating a Quiche.” What are your feelings about this past year on stage?

Griset: I’d have to agree on your mixed summation, but there have been some real gems this past year. “The Human Terrain” and Quill’s “Hamlet” (the latter starring Molly Hood as the gloomy Dane) showcased women biting into juicy dramatic roles. “Equus” by Cadence and Quill’s “American Buffalo” proved winning stagings of the classics, and Virginia Rep’s “Peter and the Starcatcher” was flat-out fun. You mentioned your disappointment with “South Pacific” — what else disappointed you this past year?

Timberline: A number of productions involved some unquestionably high-caliber work, but I ended up unmoved by the experience.

Maybe I’m just getting old, but even though a splashy musical like Virginia Rep’s “Gypsy” has a lovely set, beautiful costumes and a rousing score, it ended up having less impact on me than the intense and personal Civil War-era drama “The Whipping Man” that Virginia Rep staged back in February. Similarly, Quill’s “Holiday Memories” was full of gorgeous stage pictures but was as engaging as stale fruitcake.

Having said that, Maggie Bavolack’s performance as half a dozen supporting characters (including a dog) in “Memories” was incredible. What were the year’s stand-out performances in your opinion?

Griset: For me, this past year was completely dominated by women. Dramatically, it’s hard to think of two finer performances than McLean Jesse in “The Human Terrain” and Molly Hood in “Hamlet.” Hood has always been a strong actor, and Jesse has really come into her own in recent years — I feel like she’s in half the shows I see these days.

On the comedic side, Maggie Roop’s part as a ditzy and deranged hippy in Virginia Rep’s “The Last of the Red Hot Lovers” was funny enough to upstage even Scott Wichmann. Musically, I thought Brittany Simmons’ powerhouse vocals and dramatic performance in the titular role of 5th Wall’s “Carrie the Musical” didn’t receive the attention they should have.

And in a field all her own was Jessi Johnson as the glamourous movie star in Triangle Players’ “Psycho Beach Party.” She has such an incredible presence onstage — someone should just write an original show for her already.

We’ve both talked about actresses. What men stood out for you this past year? 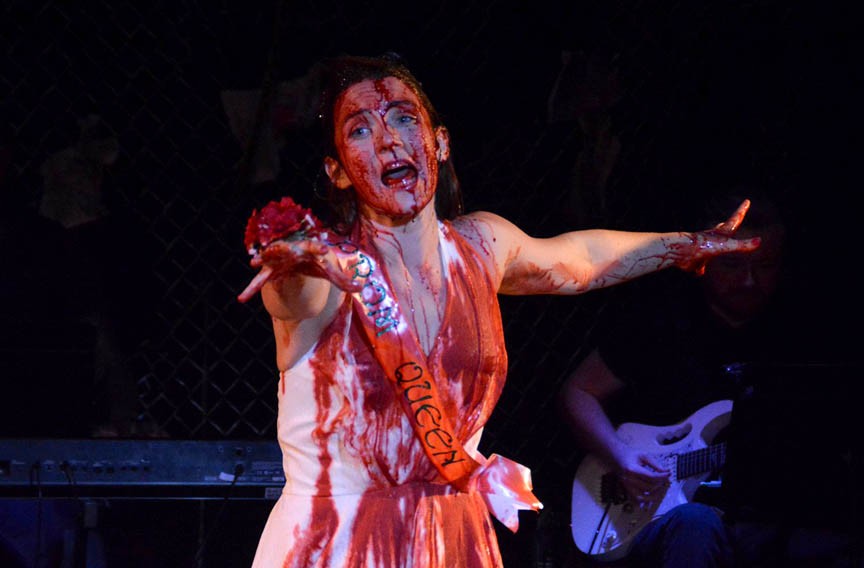 Timberline: Some actors bring a special pizazz to every role they take, and I’d put at least two guys in that category: Andrew Firda, who was the best thing about Triangle Players’ “Angels in America,” and Daniel Cimo, who was exceptional in the one-man show “Buyer and Cellar,” also at that theater. I also will remember 2015 as the arrival of Denver Crawford: He nailed his portrayal of an awkward teen in Firehouse’s “The Aliens” and followed it up with a great musical performance in Firehouse’s “The Boy in the Bathroom.”

Speaking of the Firehouse, Joel Bassin called for a season of “radical change” there. How do you think that’s working out? And what are you most excited about coming up next year?

Griset: I have mixed feelings about the Firehouse. So far it’s only announced two traditional plays this season, A.R. Gurney’s Eugene Ionesco-tinged “The Fourth Wall” (which received mixed reviews), and the “Stepford Wives”-influenced “Maple and Vine,” which is scheduled in March. While interesting choices, the more radical part seems to come from Bassin’s Firehouse Fringe umbrella, under which the theater hosts magic shows, storytelling events and improv. Given Bassin’s background, I was hoping this season would be a bit more experimental.

Next summer, everyone’s sure to be talking about Virginia Rep’s musical “Dreamgirls,” which is based on the Supremes. Before then, the 5th Wall and Richmond Triangle Players’ co-production of Annie Baker’s comedy about sexuality and being politically correct, “Body Awareness,” opens in April and looks promising.

From the young punks at TheatreLab, I’m looking forward to the savagely funny “Bad Jews” in February and David Ives’ sexy comedy “Venus in Fur” in April. Plus, I’m always a big sucker for “Little Shop of Horrors,” which Swift Creek Mill Theatre will open in March.

How about you, Dave?

Timberline: The year should start out with a bang as Quill’s Anton Chekhov-skewering “Stupid Fucking Bird” opens Jan. 7 with a cast just ridiculous with talent, including recent Artsie Award-winners Jeff Clevenger and McLean Jesse. It’s also worth noting that two homegrown originals will premiere early next year: Irene Zeigler’s “The Little Lion” at the Mill in January and the Jason Marks and Debra Clinton kids’ musical “Croaker: the Frog Prince Musical” at Virginia Rep.

I’m glad you mentioned TheatreLab. The young company is instigating all sorts of fascinating endeavors, taking on issues about diversity in theater with “Blacklist,” a program celebrating African-American voices, and their theater for women by women initiative called the B Word. Here’s hoping they keep pushing the envelope.

In contrast, two of the biggest developments of the coming year will involve older white guys. In March, semi-retired local acting legend Joe Inscoe will return to the stage in Quill’s “King Lear” and sometime next year someone will take over for Bruce Miller as artistic director of Virginia Rep. What that portends for central Virginia’s cornerstone theater company will be a fascinating drama in its own right. S