Pushing and Pulling the World Along 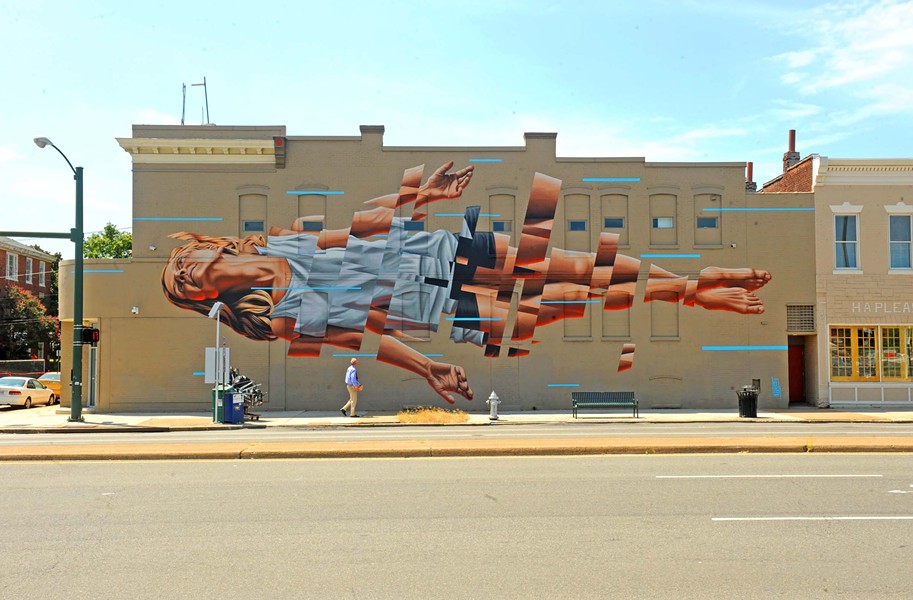 For artists it can mean simply surviving by doing what they were meant to do. For big-time donors it can be enhancing the city’s reputation with world-class art and exhibitions. For an employee at a nonprofit such as Art 180 it can mean helping teens from juvenile detention tell their stories to the world.

In lieu of new major capital campaigns, the past year has featured repositioning among arts groups and pushing some big projects. The Institute for Contemporary Art remains the most hotly anticipated development — it’s now scheduled for 2017 because of construction delays. The American Civil War Museum’s big new building also was pushed to an early ’17 opening.

But the Black History Museum should open in its new spot before the end of this year. Katie and Ted Ukrop’s soon-to-open Quirk Hotel and Gallery have kept some momentum for the downtown Arts District, while Scott’s Addition has lured at least one gallery, Ghostprint, out of downtown and into its thriving hive of activity.

Richmond CenterStage, which has been without an executive director, hopes to announce its new one in the fall or by the start of 2016, spokesman Jay Smith says. The organization is happy with SMG Richmond’s programming, he says, but for “competitive business purposes” cannot disclose the terms of its contract.

A big trend seems to be the continuing retirement wave of older, veteran arts figures, leaving leadership opportunities open. And it isn’t only individuals. One of Richmond’s oldest and most influential fine art galleries, Virginia Commonwealth University’s Anderson Gallery, closed its doors in May. There was the rolling turnover of curators at the Virginia Museum of Fine Arts who went on to bigger jobs at other institutions, and the retirement this year of the museum’s media relations guru, Suzanne Hall. Frank Robinson, who helped start and expand Lewis Ginter Botanical Garden, retired in March; Karen Coltrane, the director and chief executive of the Children’s Museum of Richmond, left in late 2014; John Bryan at CultureWorks retired and was replaced by Scott Garka.

Major figure Bruce Miller of Virginia Repertory Theatre announced his retirement; Joel Bassin took the reins at Firehouse Theatre; and David Leong, longtime chair of the VCU theater department, stepped down and was replaced by Ron Keller, with David Toney in a newly created artistic director position. Sherrie Brach took over for Darcy Oman as the new top executive at the Community Foundation, one of the area’s largest funding sources for the arts: You may recognize its name from the Folk Festival stage. Within 10 years, the philanthropic organization expects to be managing a billion dollars.

On corporate sponsorship, Altria and Dominion Resources remain top players, but an emerging supporter this year has been TowneBank, which stepped in immediately as a major sponsor for the UCI Road World Championships. Based in Norfolk, the company is making a big play for a cultural footprint in Richmond, having just opened its first banks here. TowneBank pops up behind such wide-ranging groups as the Cultural Arts Center at Glen Allen, the Richmond Ballet and the Valentine museum’s History Makers.

Families such as the Markels, Thalhimers and Reynolds, and collectors such as Dr. Paul Monroe, could make the power list every year — their support remains crucial.

Another growing trend is a concentrated push to make Richmond more attractive to emerging artists and local arts graduates. An example at the grass roots: Studio Two Three, a printmaking collective, raised more than $50,000 online, led by the artists who use the space, to move into a larger, 7,000-square-foot spot in Scott’s Addition. Affordable studio and living space equals more artists.

The music scene continues to earn national kudos, led this year by the emergence of a lush pop transplant from Nashville, Natalie Prass. And Hardywood Park Craft Brewery has become a favorite spot for bands. The Richmond Symphony is having a productive year led by its executive director, David Fisk: It received a large matching grant from the Mary Morton Parsons Foundation to pay for a mobile Big Tent, allowing the symphony to take concerts to the people. It could be a game changer. The new setup will debut for a free concert with “American Idol” finalist Rayvon Owen at Brown’s Island to kick off the bike championships.

The city has created a full-time position to work on public art with Ellyn Parker, who arrived from the San Francisco art scene, as public art coordinator to manage projects shaped by the coming Public Art Master Plan. Its first public meeting is Nov. 17 at the Science Museum. “I am hoping to be able to broaden the notion of public art to include other types of projects,” Parker says by email, noting that the only money comes through capital improvement projects’ 1 percent fund, which has limitations.

Young generations continue to assert their vision for the future. Take the city’s growing mural landscape. R. Anthony Harris, the RVA Magazine publisher, is in his fourth year of decorating city walls through the Richmond Mural Project, a collaboration with Art Whino. Harris and his team of creatives also pulled off a New Year’s Eve celebration on Brown’s Island to bring in 2015. Burlesque groups have flourished here, as have comedy groups, led downtown by Coalition Theater. Gallery5 celebrated 10 years of serving as a crucial community hub for all sorts of experimental and playful art.

Leaders continue to notice strong interest from millennials in future careers within the broader cultural world. “We had over 100 applicants for five paid internships,” says Bill Martin, director of the Valentine, which unveiled its major renovation this year. “There are a lot of millennials and they tend to volunteer more as well.”

Richmond is transforming demographically as well, and this may be reflected in its arts and culture. It’s no longer a majority black city as many still assume, Martin says, and no longer are most of its residents originally from the area.

Probably the most ambitious long-term idea is the BridgePark, a pedestrian bridge and leisure park across the James River. The project is led by another young supporter of the arts, Ted Elmore, and it’s been receiving considerable crowd turnouts, even before the research phase begins. One can only imagine the price tag, but hey, at least Richmond is thinking big.

Philanthropist
Chairman of VMFA Board

Bill Royall was recently re-elected board chairman of the Virginia Museum of Fine Arts. As a major contributor to the Institute for Contemporary Art campaign and the museum, he remains an indispensable figure. And the acquisition of his marketing company for $850 million, announced in December, further frees him to pursue passion projects. He and his wife are big-time art collectors and driving forces, particularly as Richmond ramps up its presence in the contemporary art world. They’ve invested not only in the larger art world — one of their gifts to the museum will be part of the anticipated Kehinde Wiley show in June — but also has shown interest in local artists.

The public face for nonprofit Venture Richmond, Berry is responsible for some of the area’s most successful arts events with the largest crowds in town — the Richmond Folk Festival, Dominion Riverrock and Friday Cheers among them. Berry remains a major player in the effort to reshape downtown.

Vogt, who works for out-of-town-based conglomerate SMG, is a crucial gatekeeper who has a lot to do with what major concerts and shows hit Richmond each year — helming venues such as Altria Theater, the Richmond Coliseum, CenterStage and the Bon Secours Washington Redskins Training Center. She also decides rental rates for local arts groups. A month and a half into its fiscal year, it’s hit the number of commercial shows (comedy and music) that were held all of last year at the Carpenter Theatre, and the shows are forging ahead at Altria.

As the individuals in charge of the philanthropic arms of Richmond’s two leading corporate sponsors for the arts, Agee with Altria and Holliday with Dominion Resources are powerful players. Just one example: Dominion gave $75,000 this year to help stage the successful “Voices of Survival” concert by the Richmond Symphony, the Weinstein Jewish Community Center and the Holocaust Museum.

Edmunds took over as director three years ago, and his hard work paid off in 2015: The AMC series “Turn” announced it was returning for a third season, new PBS series “Mercy Street” was announced, and people turned out in droves to audition for the film “Loving.” Its Oscar-nominated director Jeff Nichols starts shooting locally in the fall. A master salesman, or a true believer, his lobbying for Richmond has kept the local film industry growing at a steady clip. We’re seeing local talent rise nationally as well, such as director Rick Alverson and young actors Hays Wellford and Devin Druid.

Perhaps more than any one local artist, Clark is helping raise the profile of the Richmond arts community. Her timely “Hair Craft Project,” a Confederate flag made of Afro-American hair, won the international ArtPrize in the juried two-dimensional category; and her work has been exhibited in more than 250 museums and galleries around the globe. Both as a teacher and arts representative, she’s having profound influence.

Merling saw one of his biggest accomplishments to date with “Van Gogh, Manet, and Matisse: the Art of the Flower” exhibition, which he co-curated. Six years in the making, it drew 91,715 visitors. He also has relationships with key donors and is responsible for the 10,000 European and American prints that Frank Raysor has given to museum — significantly increasing its holdings. He’ll co-curate the big fall exhibit “Rodin: Evolution of a Genius” and moving forward, should play a large role as the museum hopes to curate more shows from within.

A trailblazer in the dance world, Winslett is a longtime singular force. She’s helped guide the city’s ballet to national prominence — recently overseeing a successful trip to Beijing and Shanghai, adding to a list of accomplishments. The coming season, with the departure of several key company dancers, will be a transitional year, as well as the celebration of Winslett’s 35th anniversary with the return of her work, “Windows,” to the Carpenter Theatre. Mayor Dwight Jones had this to say: “Under the direction of [Winslett], we have watched Richmond Ballet transform not only into a world class ballet company, but into ambassadors for our city.”

The husband and wife behind Richmond’s highly anticipated downtown boutique Quirk Hotel, opening in September right before the bike championships, are spurring renewed interest in the arts district. Katie Ukrop is a familiar face, and she’s providing a valuable local artist residency at her gallery’s new home next to the hotel. The first local artist in residence, Leigh Suggs, is a recent master’s degree in fine arts graduate from Virginia Commonwealth University’s fibers department. The entire Quirk project should be a noteworthy tourist attraction featuring local, regional and national artists.

During a 10-week stretch this summer, 1708 Gallery was packed for its alternating local artist series, “10 by 10,” which gave a temperature reading of the scene while reaching new audiences. But its big coup is partnering with the Virginia Museum of Fine Arts to bring its hugely popular InLight installation to the museum grounds Nov. 13, not to mention scoring a second National Endowment for the Arts grant and a Warhol grant. A veteran of the arts scene, Smith is committed to cultivating a sense of community and making Richmond a viable home for future generations of artists.