How to get away from all the ringing doorbells this year.

Halloween, or All Saint’s Eve, isn’t predicated on religious belief or national pride — it’s all about letting your creepy, freaky flag fly high. Of the big three, with Thanksgiving and Christmas, Halloween is the most inclusive holiday of the season, and Richmond is celebrating with ghoulish glee. Here are some fiendish Oct. 31 festivities to help get you in the spirit. 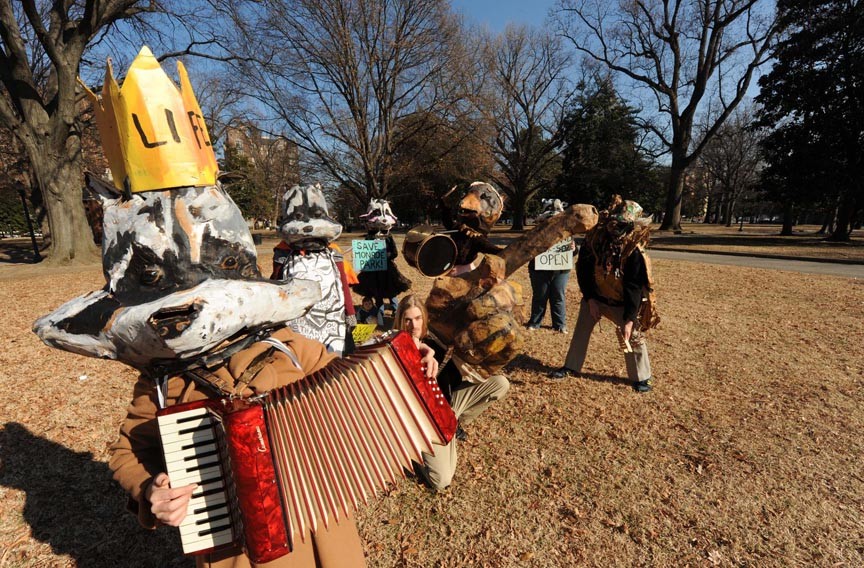 Halloween Parade
The 10th annual Halloween Parade: A Funeral March for Individual and Collective Depression kicks off at 7 p.m. on the southwest corner of Monroe Park. The all-hands-on-deck, New Orleans-styled celebration features towering puppets from the All the Saints Theater Company, stilt walkers, ensemble animal get-ups and assorted other groovy ghoulies fueled into action by the music of pleasures and pains played by members of the No BS Brass band and whoever else brings an instrument. The parade commemorates all those no longer with us, but this year’s event takes on added significance with the recent passing of accordionist and beloved All the Saints member Cayman Mooney. All are welcome to join the rolling festivities.

“Season of the Witch” at Ardent
In 1973, the British band Argent released the song, “God Gave Rock and Roll to You” (covered by the Knights in Satan’s Service, Kiss, in 1991). Author Peter Bebergal begs to differ: God may have given us rock ’n’ roll, but Lucifer is the one who made it great. The author will be at Ardent Craft Ales to discuss his book, “Season of the Witch: How the Occult Saved Rock and Roll.” The paperback release party will feature a slideshow presentation about the book and a DJ set by Bebergal and local vinyl spinning vixen Sister Goldenhaze. The visual, verbal and musical amusements begin at 7 p.m. Admission is $5. ardentcraftales.com.

Hardywood Trickery
Hardywood Park Craft Brewery celebrates All Hallows’ Eve with the seasonal release of Hardywood Trickery, a limited-edition stout aged in apple brandy barrels for eight months. Adding to the fiendish fermented festivities will be Richmond tribute acts Los Ramónes (Spanish Ramones covers), Full Moon Fever (Tom Petty and the Heartbreakers) and Maybe Partying Will Help (the Minutemen). Consumption of the latest alcoholic creation from the caldrons of Hardywood begins at 2 p.m. The music kicks in at 8. Free admission. hardywood.com.

Dead Man’s Ball
Bandito’s Burrito Lounge holds its 10th annual Dead Man’s Ball. The always-fevered creepy crawl features not one, but two costume contests at 9 p.m. and midnight with the winner of each slithering away $500 richer. DJ Ryan Andrews and Dom spin dance-floor inspirations for the grim, grisly and gruesome. The graveyard gala begins at 8 p.m. Free. banditosburritolounge.com.

Strange Matter
Richmond indie rockers the Trillions and the Sleepwalkers play individual sets at Strange Matter before they Frankenstein themselves together for a joint performance of the 2001 Strokes album, “Is This It.” New York cop attire optional. Doors open at 9 p.m. Admission is $5. strangematterrva.com.

The Creepshow Peepshow
For some bawdy Halloween-inspired titillation, check out the ghastly jiggles at the Creepshow Peepshow taking place at Gallery5. The stage will be overflowing with queens of scream, voluptuous villains and ghoulish go-go dancers. The adults-only show, with hostess Magnolia Jackson Pickett Burnside, begins at 8 p.m. $15-$20. gallery5arts.org.

Slasher! Improv
Frightening moments, such as comedic ones, often are unexpected. Slasher: the Improv Comedy Horror Show at the Coalition Theater will provide a litany of ad-libbed gut busters for your horrified amusement. The annual ha-ha-homage to classic horror films begins at 10 p.m. Admission is $10. rvacomedy.com.

“Rocky Horror”
Be an active participant in the Virginia Commonwealth University stage production of the campy B-movie classic, “The Rocky Horror Picture Show” at the Singleton Center. Directed by Rebecca Frost Mayer, showtime is at 7:30. $10-$20. Rice and spray bottles not included. arts.vcu.edu/theatre.