The most compelling images from a rush of a year in Richmond.

January usually ushers in quieter times. Not in 2014. During a driving rainstorm Terry McAuliffe was inaugurated as governor. During a snowstorm Bob McDonnell defended himself against a 14-count public-corruption indictment. The tumultuous month was followed by political storms and cultural milestones. The trial of the century took place over 28 days in July and August, and in October same-sex marriage became legal. Eric Cantor lost his seat, Gwar frontman Dave Brockie died, the baseball stadium fight continued and more than 40 Richmonders lost their lives because of gun violence.

In a world where there are more images circulating than ever before, the photojournalist’s job is to capture moments with maximum impact on the viewer. More than ever the photographer needs to be storyteller, to tell the tales that will rarely see the light of day in our social-media-centered world. Richmond is diverse, complex and ever evolving. Beauty, sadness, triumph and failure exist here, just like everywhere else. But these are our stories, our people, and Style strives each week to reveal these stories through words and images.

The New Odyssey: Published Aug. 27. Smoke billows from a boat carrying the empty costume of the late Dave Brockie, who played Gwar frontman Oderus Urungus. The Viking-style ceremony brought thousands of fans to Hadad’s Lake in Henrico on Aug. 15.

Photographer’s Note: People were lined up six deep along the lake. I managed to get a spot in front and used a wide lens to get the funeral pyre and some of the crowd into the same frame. The smoke obscured the sun, giving me the ability to shoot directly into it, which added a dramatic effect.

Father and Son: Published at Styleweekly.com, Sept. 9. Former Gov. Bob McDonnell leaves the federal courthouse after his conviction, with his son Bobby by his side.

Photographer’s Note: I was elbow-to-elbow in front of the federal courthouse doors with veteran Richmond Times-Dispatch photographer Bob Brown while we waited for the former governor to appear. Bob looked at me and said, “He has to come right between us.” Brown was right. The former governor emerged and media swarmed. I was close, maybe 3 feet away. All I could do was lift the camera above the heads in front of me.

Photographer’s Note: The steps of the courthouse were completely filled with protesters and they spilled into the street. The light was fading fast when I spotted Nolan. I used an 80-200 mm lens at its maximum with a 2.8 aperture to get this image. Shooting at this camera setting produces a bokeh effect, where the background becomes a collection of soft orbs of light.

Last Call: Published April 16. A former regular in Richmond’s early punk and hardcore scene, Mike Rodriguez, left, says he’s turned his life around. Through his Spirit and Truth Ministries, he now reaches out to others, such as J.W. Holland at Second and Broad streets.

Photographer’s Note: I was tailing Mike on Broad Street while he was doing ministry outreach. I thought he was going to face backlash and that few would be willing to talk. I was wrong. Several people asked for prayers. When J.W. came along the resulting scene became surreal. Right at Broad and Third streets, J.W. poured out emotional stories of a difficult childhood and of his time in prison.

Sonic Throwback: Published March 11. Roger Carroll and Chez Roué perform at Selba in the Fan, where live music is a regular event during dinner hours.

Photographer’s Note: Roger Carroll is one Richmond’s true characters. He has a Tom Waits quality about him. This image was shot with a wide lens to include lots of atmosphere. The piano player peeking through the lid adds a layer to the image.

Rolling Through: Published at Styleweekly.com, May 6. Brantley Tyndall takes a spill during the USA Cycling National Championship open criterion races on Broad Street. He suffered a gash above his eye when he collided with a barrier.

Photographer’s Note: I was knelt down shooting through the barriers when Tyndall failed to negotiate the curb. Jumping back I watched him hit his head directly on the corner of the barrier, just above his eye. All the other racers kept going while emergency crews rushed in.

Photographer’s Note: Donnie has been photographed and written about endlessly. This image manages to reveal a softer side, which is rarely seen. Donnie can be bombastic and outrageous, but also sweet and tender. By shifting the image into black and white, it accentuates his weathered skin, salt and pepper hair and beard and the ever-present twinkle in the eye.

Photographer’s Note: Rain poured throughout the ceremony, making shooting difficult. I was on a riser about 50 feet away with all the other media. I was just waiting for a moment when the new governor turned toward the crowd. Luckily, Bill Clinton gave two thumbs up just as McAuliffe smiled.

Eye of the Needle: Published Aug. 13. In a feature about women in the Henrico Jail, Amanda Metzgar, 24 shares: “I left Florida to come up north for heroin. Heroin inspired my move to the north. You can’t get heroin in Florida, only pills. I mean you can, but it’s a lot harder. People sell you fake stuff down there. I was on pills really bad. Dilaudids, roxies, Percocets.”

Photographer’s Note: Amanda presented a duality of character, one moment she was defiant and resigned to life as an addict, and then a softer side would emerge. Before I made this image she fluffed her hair and then asked me if I thought she thought she could model. The defiant side emerged when I made this image with the sharp look her eyes and the crossed arms.

Vigil for Kiarri Edwards: Published April 8. At a vigil, Keyari Edwards, 7, holds a photograph of her father Kiarri Edwards who was murdered in a shooting on Dinwiddie Avenue on March 31.

Photographer’s Note: This is probably the most heart-breaking image of the year. Young Keyari was surrounded by members of her extended family, but I chose to crop them out of the photograph. All the impact comes from her tears while she holds her dad’s photo.

Photographer’s Note: Less than 100 yards from the State Capitol, many homeless congregate at this church. On this morning early I was parking to cover the McDonnell trial, I noticed this man curled up with the red sleeping bag and tennis shoes in the foreground. These contrasting elements of the scene set against the white church struck me as serene, yet startling. 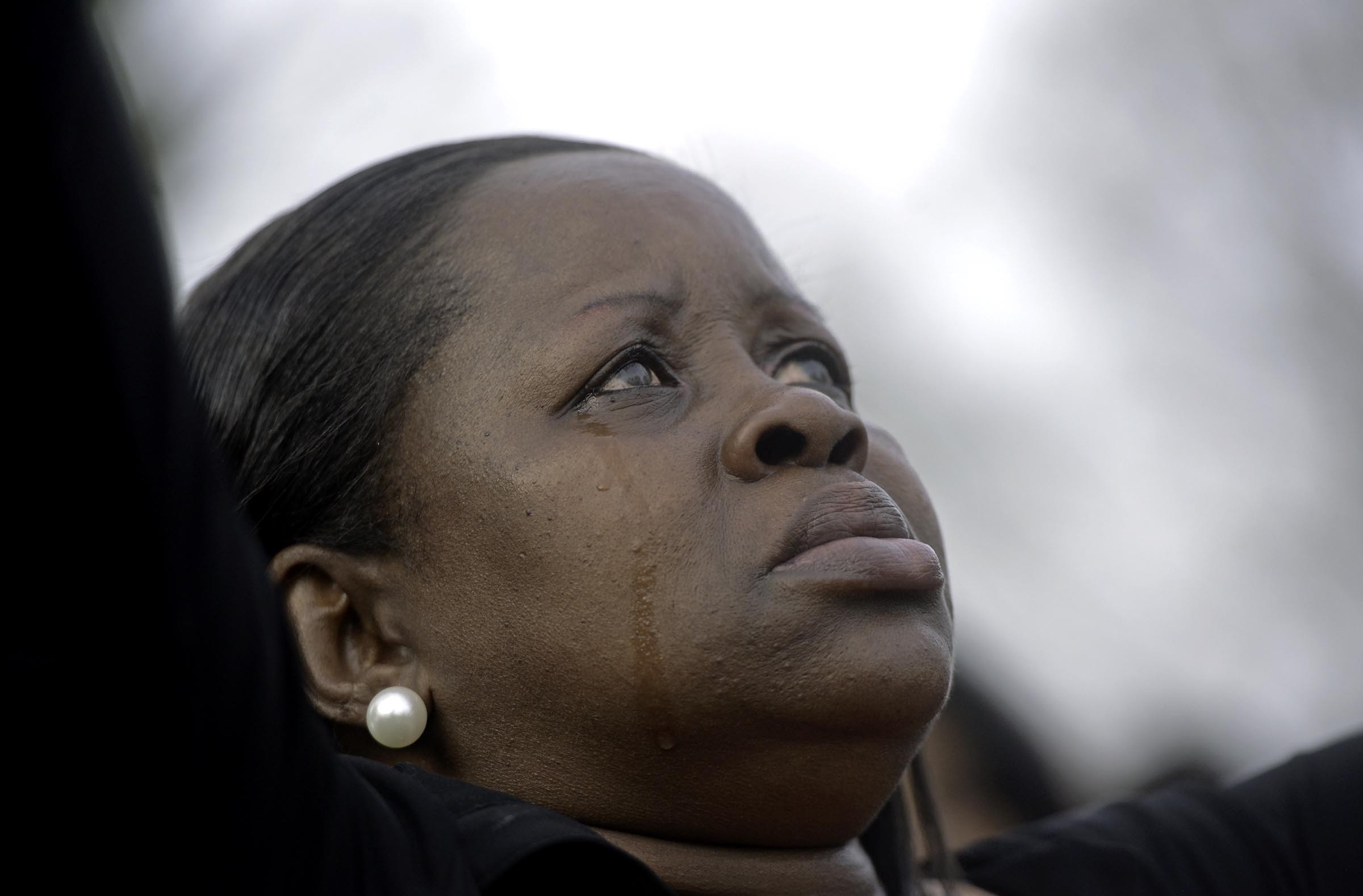 Vigil for Kiarri Edwards: Published April 8. Rotunda Allen of Richmond mourns the death of her friend Kiarri Edwards, 34, at a vigil on a Sunday night on Dinwiddie Avenue. Edwards, a father of three, was killed in a triple shooting on the same street March 31 at 11:16 p.m.

Photographer’s Note: I used a long lens to come in tight on the face. The eyes lifted heavenward and the single tear tells the story. The out of focus areas of the image brings all the attention to her sorrowful expression.

A Governor’s Defense: Published Jan. 22. Bob and Maureen McDonnell stand together as the former governor reads a statement in the lobby of law firm Williams Mullen’s downtown offices.

Photographer’s Note: I was at home in the far West End around 6 p.m. when I saw a tweet from NBC-12 reporter Ryan Nobles, in regard to an impromptu news conference to be held by the former governor about the indictment. Snow was falling hard while I negotiated Interstate 64 back into the city. Once there, I huddled with the rest of the gathered media and waited. The goal was to illustrate the tension of the moment. Maureen McDonnell appeared on the verge of tears while the former governor defiantly insisted on his innocence.

Hands Up: Published at Styleweekly.com, Nov. 25. Vanessa Coleman raises her hands in the middle of Eighth Street to protest the Ferguson decision.

Photographer’s Note: At the tail end of the Ferguson march through downtown streets, I noticed a lone woman joining in the hands-up-don’t-shoot chant while she stood alone. A police officer on a bike headed her way. I felt it was important to see the officer in the foreground, which gives the image depth.

Photographer’s Note: As the vigil was ending I noticed a sliver of light on the young boys’ face, while most other heads in the crowd were bowed. As with many children I see at vigils, they remain calm, as if in a state of shock. The illuminated face focuses the viewers gaze directly on the boy’s eyes, and then the smaller details emerge: the button of his dad’s face, the candles and tender hand of his aunt.

River Battle: Published May 21. Melissa Lesh of Richmond fights against capsizing in the Leinenkugel’s Summer Shandy Kayak Freestyle event on the James River during Dominion Riverrock. A fast-running river and temperate weather drew an estimated 100,000 people to the three-day music and outdoor sports festival on Brown’s Island. Lesh placed first in the women’s kayak boater-cross event and third in the kayak freestyle.

Photographer’s Note: The river was running at flood stage, making for a wild currents. I was amazed by the bravery and skill of the kayakers. A few disappeared under the brown and log-strewn James only to pop up downstream seconds later. I was standing on a bridge that juts out into the water, which offered a unique perspective, shooting almost straight down.

Caving In: Published April 8. The Moore Street School, built in the 19th century, is an attached annex of Carver Elementary. No longer in use, it’s become a rodent-infested, dilapidated arm of the school, separated from students by plywood and drywall.

Photographer’s Note: This room reminded me of a time capsule, like officials just closed the doors one day and walked away. Reminders of a vibrant classroom remained with the rainbow and Nike swoosh, but the lone chair sitting above the decay becomes symbolic, like one day someone might return.