2013 Restaurant of the Year: Aziza's on Main

This Shockoe Bottom cafe offers thrills without frills and a delicious culinary pedigree.

Not everyone will get it. The place is so low-key it's almost invisible while Shockoe Bottom churns around it. The small, brick-walled cafe called Aziza's on Main is wedged next to a family-run pharmacy and has only 10 tables and a bar, with a brick oven glowing in back. The atmosphere is a bit rough around the edges, but somehow that makes the contrast of elegantly personal food more acute.

Inside are served some of the city's most flavorful, fascinating meals with a humble spirit that's refreshing in an age of branding and bragging. For Style Weekly's reviewers, it became all about the food — and the people and mission behind it. And for all those reasons they name Aziza's as the 2013 Restaurant of the Year.

Aziza's was the collaboration of Rusty Fallen and her son Billy Fallen, and the place is named for her Lebanese mother, who also cooked in Shockoe Bottom. Billy is the force behind a namesake bread that's one of Richmond's crusty, full-textured favorites. Together they started modestly, in a business owned by Rusty's brother, Philip Gibrall. They offered lunch only, then dinner, then pizza, then brunch — steadily building a following. Billy Fallen has moved on and now works with Cafe Caturra, opening new shops in the region. 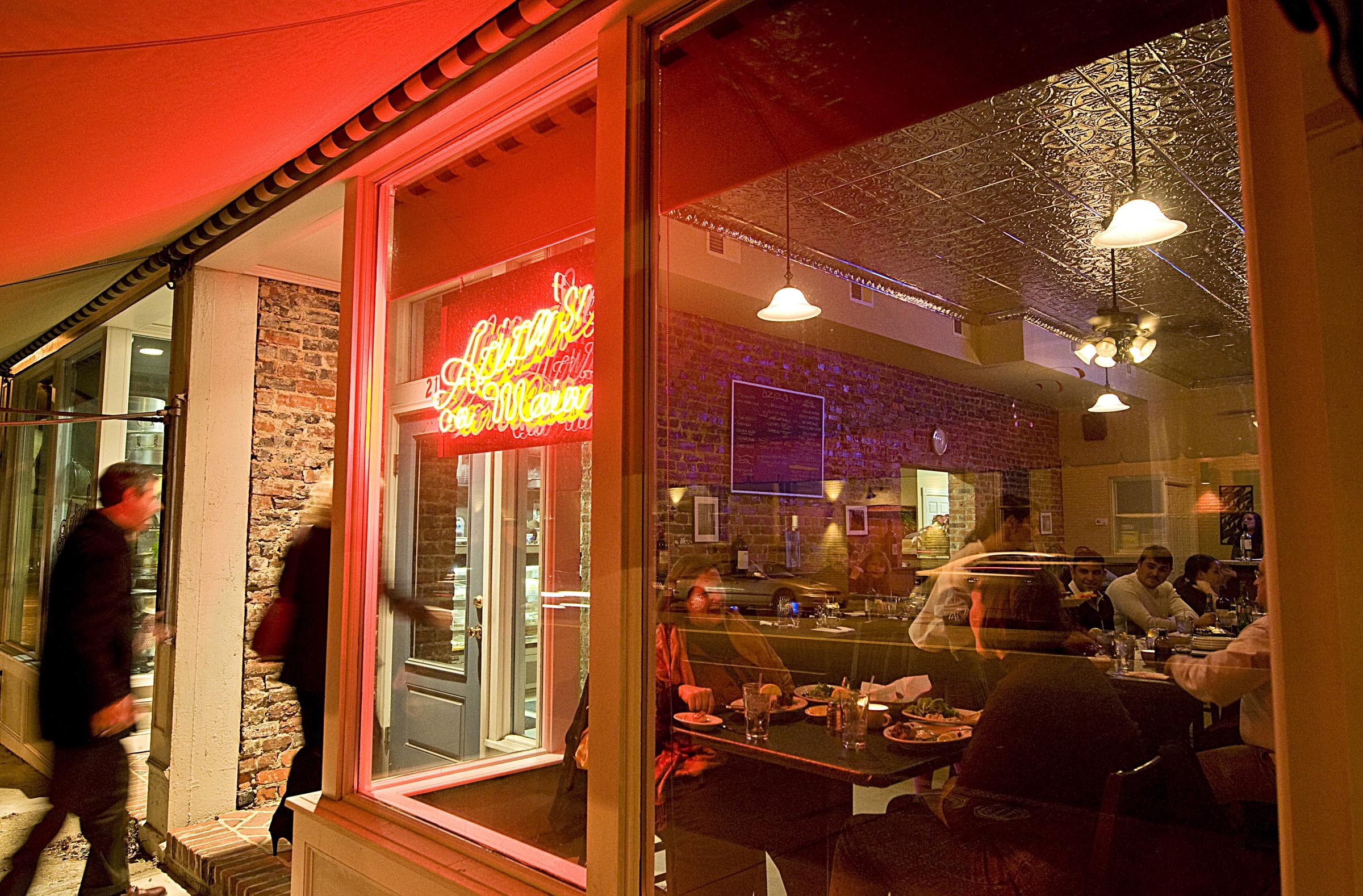 Aziza's has changed chefs four times in four years but keeps its fresh, local-food focus, and continues to polish its rustic appeal with pungent flavors and a wallflower personality.

"I've never had a bad meal there," reviewer Matthew Freeman says. "It's the one place where I'm most excited to eat." With its three-fold identity — Lebanese fare at lunch and in the take-out case, wood-fired breads and pizzas, and chef Philip Denny's kitchen doing dinner — "the differentiation is all done well," Freeman adds, recalling a dinner of arctic char as one of the year's most memorable. 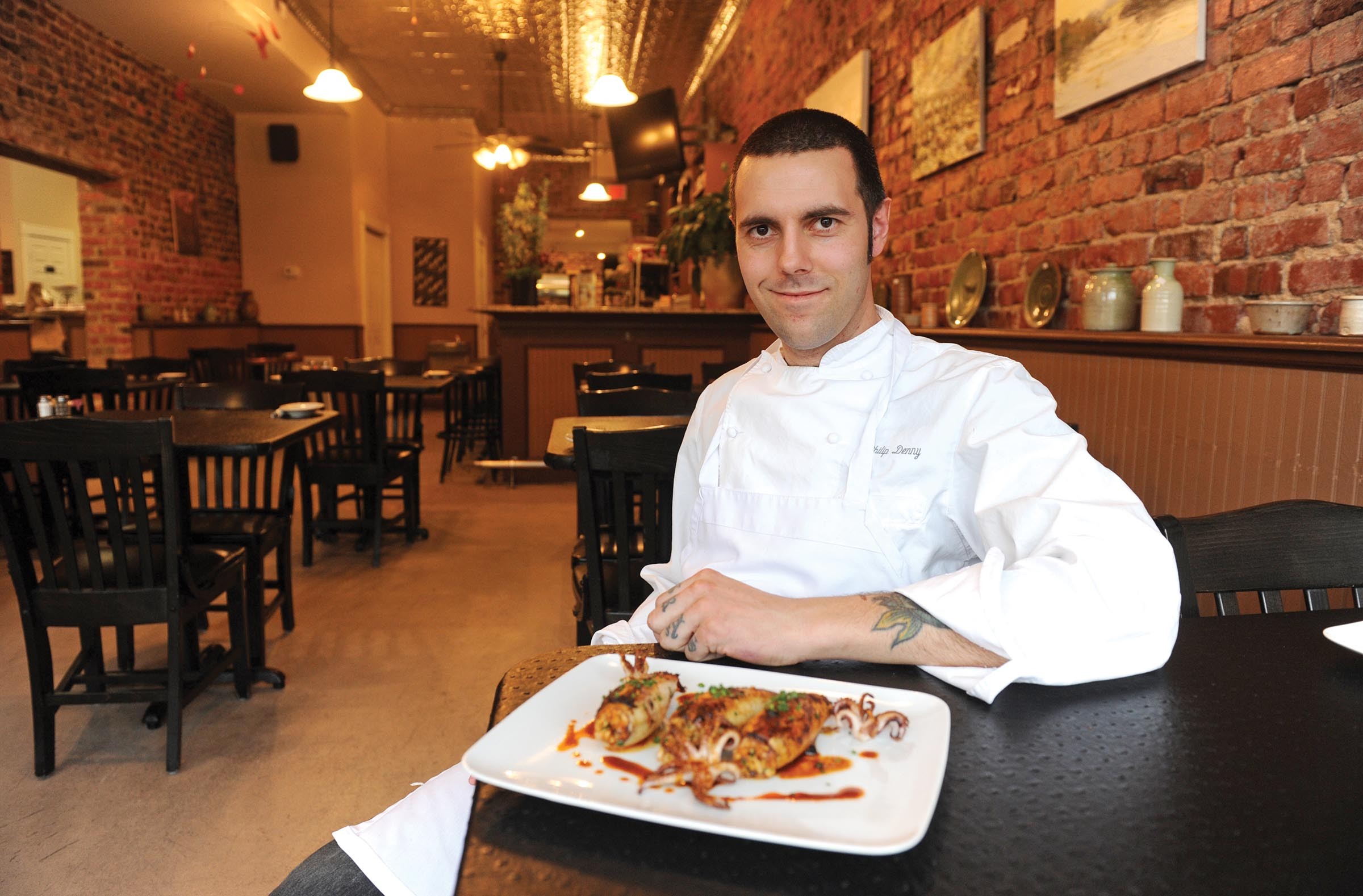 "Aziza's is in my regular rotation," reviewer Karen Newton says — "not because it's perfect, because it's not — but because I have never been disappointed in the creativity or execution of the food. Like a ful mudammas of porchetta, crowder peas, butter beans and pink-eyes peas, full of garlic and onion broth for sopping, or a terrine of scallops and lobster that melts in the mouth. Spicy and sweet fire-roasted shrimp with chorizo ravioli. And let's all just acknowledge that with a cream puff as good as Rusty Fallen's, dessert is an inevitability at Aziza's."

While Newton wishes for a rangier wine list to keep pace with the food, she finds more to adore: "I love the poetry of chef Philip Denny ending up there, too. When I'd see him and his wife eating at Aziza's in the past couple of years, he talked about how it was the best-kept food secret in town. Now, he's the master of the secret and doing a splendid job at offering something for everyday eaters as well as food adventurers."

"The food is much, much more interesting and tasty than some of the more popular places in town," says reviewer Ellie Basch, who hopes the atmosphere can rev up with more mingling among guests. Service, led by manager Stephanie Gibrall, is "friendly and efficient, and it has wide appeal for eat-in or takeout," Basch says. She applauds Denny's "gastronomic wizardry," Rusty Fallen's solid Lebanese repertoire and the staff's expertise with pizzas.

The music leans toward vintage, the kitchen action is on view from inside and the street, and the staff is approachable — "meaning it's a place you can go on a date, as a group or alone and feel equally at home," Newton says. 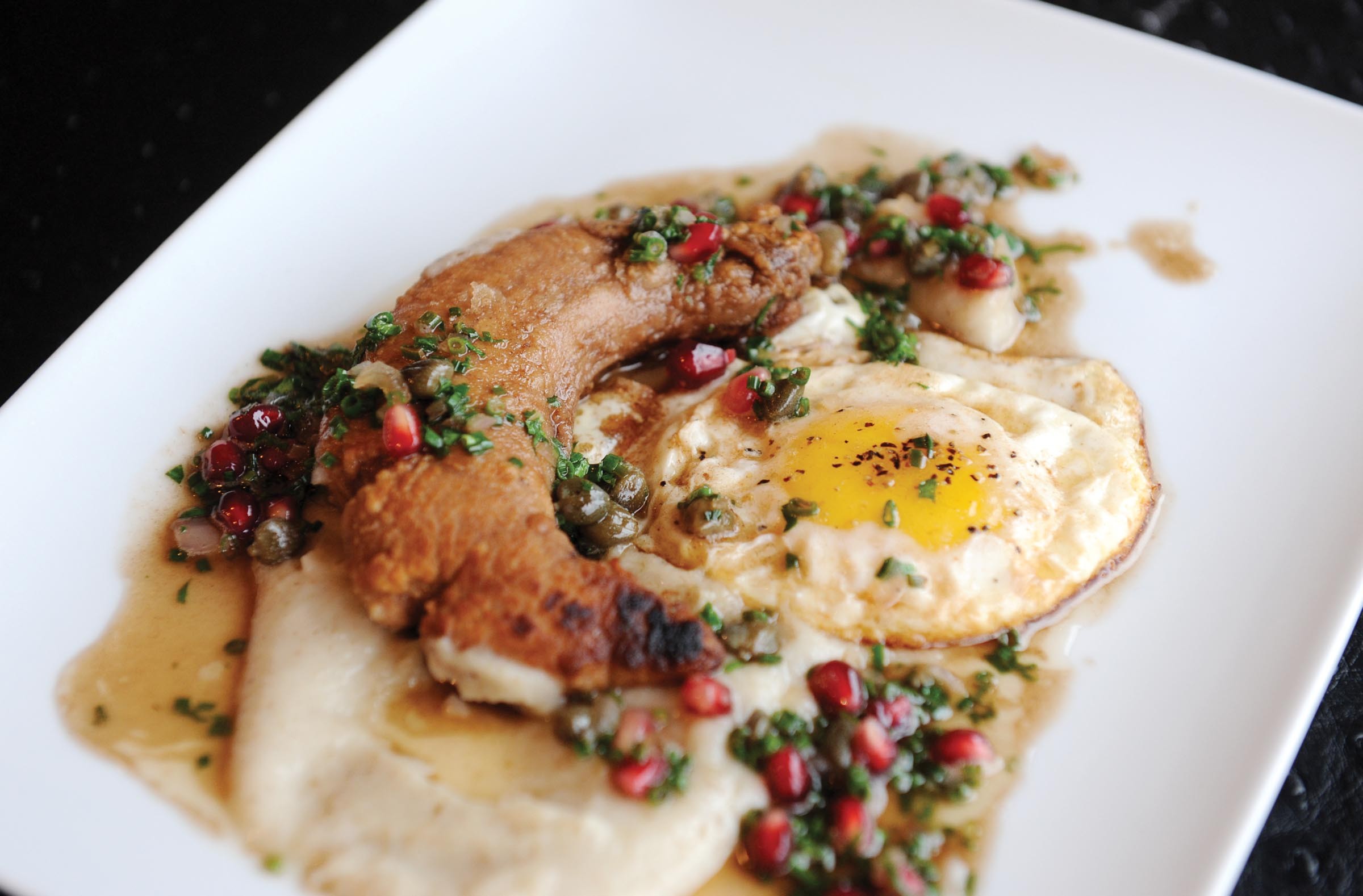 "They have all the elements that matter to a frequent diner, she says: "a crack kitchen staff that aims to please and a well-thought-out menu that changes often and is reasonably priced," with most mains in the midteens.

Flatware is cafeteria-cheap, napkins are paper, and lighting can be overly bright, but local pottery and paintings and a south-facing cityscape give it an essence that's calm and functional without pretense. Food snobs still manage to love it, because Denny gives them something new every week, but they're advised to check any hopes of fanciness at the door.

"Aziza's is a quirky restaurant," reviewer Genevelyn Steele says. "The atmosphere is artsy-craftsy, like a potter's workshop. And there's always a chewy red wine by the glass, served up by a friendly face. It's been a popular lunch spot for years — Rusty Fallen's stuffed grape leaves and cream puffs are as legendary in Shockoe Bottom as Edgar Allan Poe. 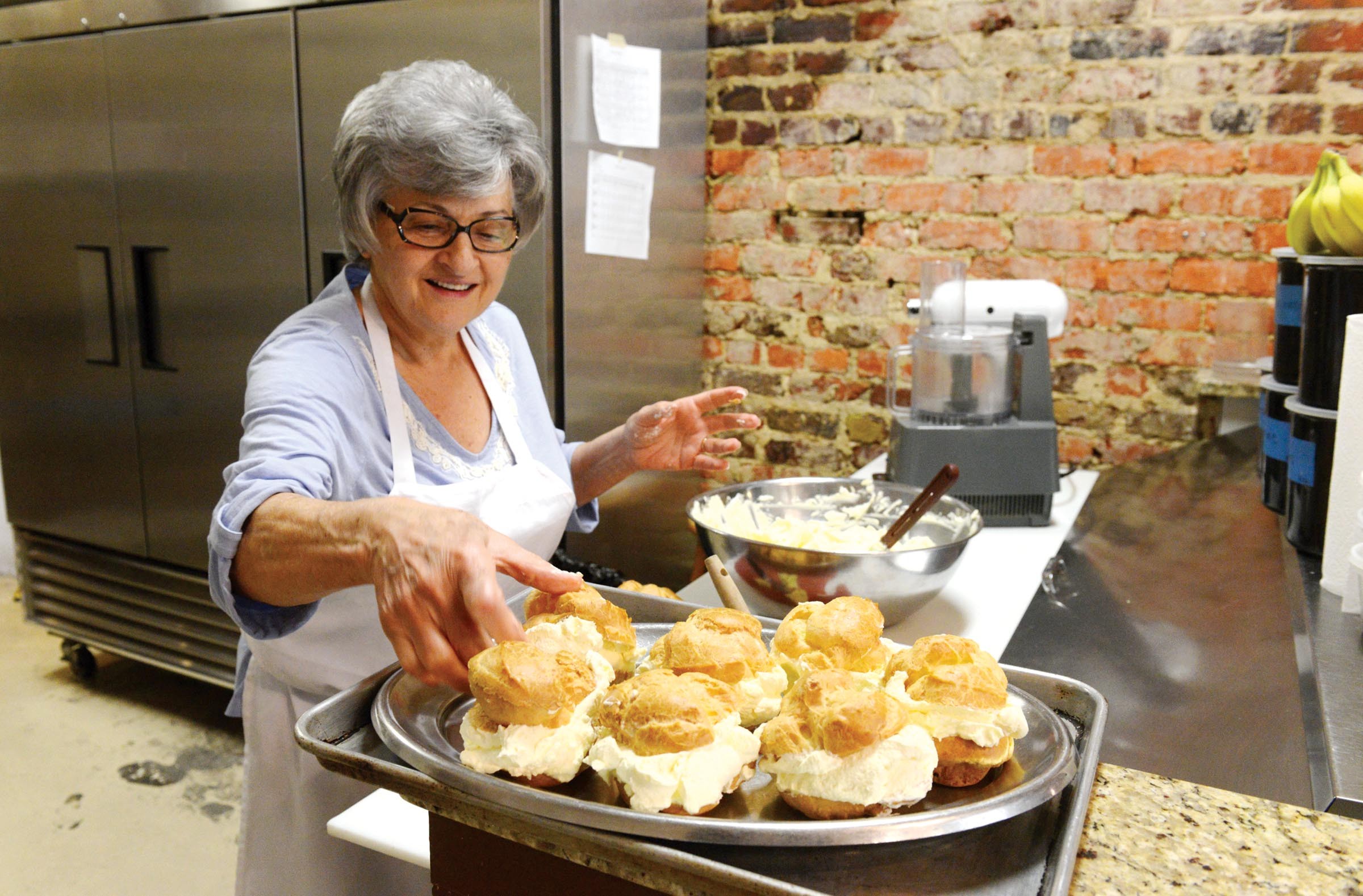 "I see a lot of restaurant owners enjoying pizza with bottles of house wine on their nights off," Steele continues. "But for me, the draw is new chef Philip Denny," who started in October after stints at Georgetown's Citronelle and a few years at Six Burner in Richmond. "He creates interesting, Mediterranean-influenced dishes on a menu that reads more like a bucket list than the night's specials. He does this on one six-burner stove, with limited prep time.

"The kitchen does a 180 after lunch, transforming a pizza and sandwich place into a chef's laboratory. Pasta made from house-milled flour, wood-oven-roasted oysters, prime New York strip with a delicately chopped, pungent gremolata, sweetbreads sharpened with cider and horseradish, squid stuffed with rice and chorizo — these are a few of the edible adventures you'll find, and for less than a bus ticket to Brooklyn."

"'Aziza's seems off the beaten path yet right on it. To me, it is by far the most undersung restaurant in Richmond. It continues to rotate exceptional chefs through its bright kitchen -- Thomas Arrington, Caleb Shriver and its most recent wizard Philip Denny,' with Rusty Fallen's desserts and Lebanese lunches the delicious constant." --Robey Martin