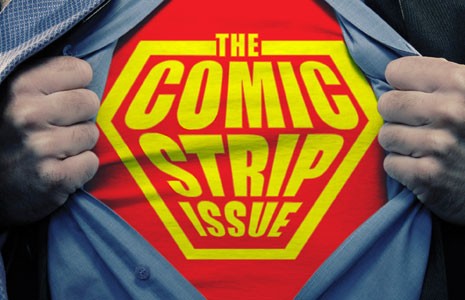 Last year’s inaugural Comic Strip Issue was such a rousing success that sounds like those — rendered in splashy red ink and accompanied by squiggly yellow and black lines denoting impact — reverberated around our corridors for months.

A one-shot? Good grief no.

This potent display of indigenous illustration, with local artists cracking wise on Richmond-related topics, social mores and absurdities, has become a regular addition to Style Weekly’s publishing calendar. This is, indeed, a comic town.

And we’ve upped the ante: The winner gets the chance for a paid gig as a Style cartoonist for six months, with space reserved for a strip every other week, alternating with Twice-Chewed Tales in our Arts & Culture section and keeping company with our weekly HR Department cartoon in the Classified section — both locally created comics.

Deciding on a winner was as hard as Superman’s bicep, as difficult as an Alan Moore plot summary, as fraught with intrigue as an encounter with Marmaduke in the middle of a bone-burying excursion in Mary Worth’s flower garden. Because for this second installment of the big comic bonanza, Richmond’s finest ’toonists outdid themselves. It’s a casting call that includes talking Confederate statues, Oregon Hill cattle drives, Fabergé chickens, city bus philosophers, cynical salamanders and craisin-loving TV anchor people.

So welcome, once again, to the world contained in Style’s Comic Strip Issue, in which you’ll find River City penciled, ink’d, paneled, shaded, gray-scaled, captioned, put down and gagged up to the furthest reaches of community satire. Who says sequels have to be inferior? Every comics fan knows that, once the origin story is out of the way, the real fun begins. — Don Harrison

Click on the slideshow to the right to view this year's comics.

Cartoonist Ruthie Proctor takes first place in the 2011 Comic Strip contest and gets a six-month paid gig as a cartoonist for Style Weekly.

Perhaps cartooning is in Proctor’s blood. Her father, Dan, is a longtime editorial illustrator for the Knoxville News Sentinel, specializing in sports and political cartoons. “He’s definitely been an inspiration,” says the freelance animator, who graduated with a degree in kinetic imaging from Virginia Commonwealth University last year. A follower of indie and web comics, she isn’t much of a fan of the offerings found in the newspaper comic section. “Most of today’s comic strips are not funny,” the 22-year-old maintains. “Or you can only laugh at them in an ironic way, like the Family Circus.”

The Church Hill resident will begin contributing a biweekly cartoon for Style’s Arts & Culture section starting in the next issue. In the meantime, readers can view some of her fine animation work at ruthieproctor.com.

The main man at Mended Arrow Design, Khodabandeh wears many creative hats. He does pro bono work for local nonprofits, teaches graphic design at both the Appomattox Regional Governor School and Virginia Commonwealth University, his alma mater, and is the longtime design director at Gallery5, owned and operated by his wife, Amanda Robinson.

The winner of numerous design awards — including a Best in Show at this year’s Richmond AIGA competition — the 30-year-old also is an accomplished cartoonist who recently found funding through Kickstarter.com for a 35-page color comic based on the Iranian folk tale, “The Little Black Fish.” He agrees that Richmond is a comics town. “There are a lot of cartoonists here,” he says. “So many, in fact, that it blows my mind.” To follow Khodabandeh’s many projects, posters and collaborations (talk about mind blowing), go to mendedarrowdesign.blogspot.com.

Jeff Gaynor has been drawing cartoons since he was 4 or 5, he says. But the 38-year-old Innsbrook resident never had his art widely published until last year’s inaugural Style Weekly comic issue. Gaynor wins third place for his wry and inspired strip featuring a favorite recurring character, Sal Mander. “I created him some time back,” Gaynor says. “I like him because I can make him as irascible as I want.” You can find more of Sal online at the recently launched salmandersays.com.

A native of Virginia Beach, with degrees from William and Mary and Old Dominion University, Gaynor works by day as a statistician for Mondial Assistance, a traveler’s insurance company. He’s a longtime comics fan — something of a historian, in fact (his uncle owns Unicorn Comics in Chicago). To him, the old “E.C.” comics and Will Eisner’s ’40s strip, “The Spirit,” still stand as pinnacles of the form. But his biggest contemporary inspiration is the satirical newspaper, The Onion. “It’s the most brilliant publication in America,” he says. In his off time, the owner of three dogs and three cats helps to foster homeless and discarded dogs — not salamanders — for the Henrico Humane Society.