There is a way for Democrats to claim leadership on the war, recover control of Congress, and set the stage for winning the White House in 2008. It involves thinking outside the box, but not that far outside. 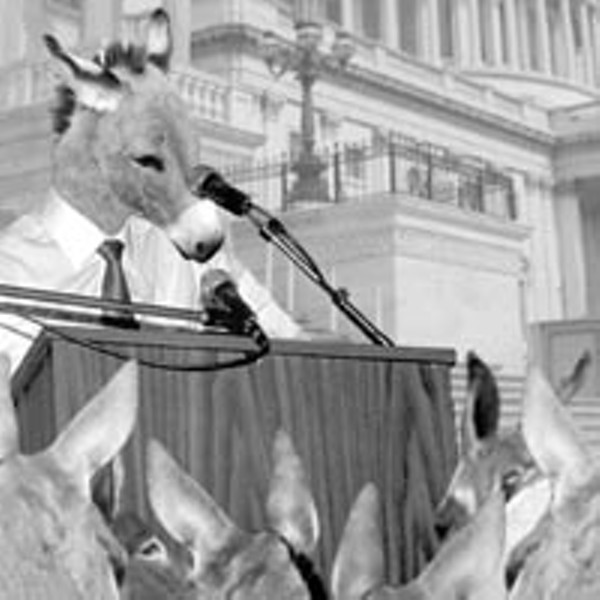 Because of the war. Because, after 40 years, Democrats still can't figure out how to do what FDR, Truman and JFK did so masterfully: lead America as tough-minded, pragmatic, globally minded idealists.

Entering 2006 — a year in which Democrats can and should reclaim both houses of Congress — they continue to waffle about Iraq. A few gallant voices call for immediate withdrawal, a few more for a timetable. But most party insiders — including the leading presidential wannabes — offer timid critiques of Bush's leadership while offering no real alternative to "staying the course."

Because that's basically the platform John Kerry ran on in 2004, it's not very promising.

Yet there is a way for Democrats to claim leadership on the war, recover control of Congress, and set the stage for winning the White House in 2008. It involves thinking outside the box, but not that far outside. Just enough to take a page from British parliamentary politics and another from Newt Gingrich's "Contract With America."

Imagine a solid phalanx of Congressional Democrats standing on the Capitol steps as their leaders made the following public appeal to President Bush:

"Mr. President, it has become increasingly clear that the American people have lost confidence in your conduct of the war in Iraq. At the same time, most Americans refuse to give up on the hope of finding a way to end this war with honor, leaving behind a stable, relatively free Iraq.

"As Democrats, we could easily embrace a strategy of mere opposition, relying upon the continued failure of your present policy for sweeping victories in November.

"That would be good politics — but not responsible leadership. American men and women have died — and continue to die — in Iraq, and only an honorable and successful outcome can justify their sacrifice. So long as any realistic chance of such an outcome remains, we, as a party, must reject the option of immediate withdrawal.

"Regrettably, there is no prospect of a successful outcome so long as you retain the advisers who persuaded you to undertake this ill-judged adventure — without adequate preparation, strong allies or a realistic exit strategy. Their responsibility for the present quagmire is clear. They have forfeited the confidence of the American people.

"Therefore, Mr. President, we call upon you to clean house. Demand the resignations of all who bear responsibility for the mess in Iraq. Appoint a new team, untainted by the dishonesty, incompetence and corruption that have characterized the conduct of the war. Work with these new advisers — and with both parties in Congress — to craft a realistic strategy for a successful and honorable end to the war.

"If you do this, we pledge to work with you.

"However, if you retain your present team, we will reluctantly conclude that you have given up on any chance of a positive outcome. Under those circumstances, our party will unite to oppose the further waste of lives and taxpayer dollars in Iraq. We will go to the country in November, united behind a call for immediate withdrawal. And we will win.

"Mr. President, the choice is yours. With your present team, defeat and dishonor are inevitable. If you want to stay the course, you must choose new advisers and develop a new strategy in which all Americans can have confidence.

"We await your decision."

In one gesture, Democrats would demonstrate their readiness to lead, not merely criticize. They would show that they put patriotism ahead of politics. And they would place responsibility squarely on the shoulders of the men and women who misled America into the present mess.

They would also catch the president on the horns of a dilemma.

In return for discarding a discredited team, Bush could assure himself of bipartisan support for any genuinely plausible winning strategy in Iraq — thus taking that issue off the table in 2006. By doing so, he would virtually assure continued Republican control of Congress for the rest of his term, grasping his only real hope of a legacy.

Should he refuse — as seems most probable — the president would hand the Democrats an issue on which to unite for the fall campaign. Following the Gingrich model, Democrats could nationalize the 2006 Congressional elections, avoiding the necessity of trying to pick off incumbent Republicans one by one. Barring a miracle in Iraq, they would greatly improve their odds of recapturing both the House and Senate.

Either way, the Democratic Party would finally demonstrate the ability to be tough-minded and idealistic on a crucial issue of national security.

In 1965, the last great swing of the national pendulum began when a president from Texas led America into a quagmire halfway around the world. If Democrats can summon the courage to act boldly, the pendulum could start swinging back in 2006. S

Frederick T. ('Rick) Gray Jr. grew up at Bermuda Hundred, in Chesterfield County, where he lives today. He has worked as an actor, high school teacher, lawyer and as Virginia's Secretary of the Commonwealth. 'Rick writes a weekly opinion column for the Village News.