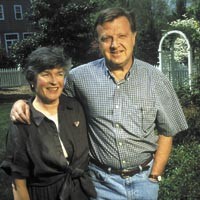 When Home Style debuted 18 years ago, the monthly had a decidedly practical feel and a nuts-and-bolts approach to home living. The contents page reveals a magazine with a sensible consumer in mind. "Wired" featured the latest in "electronics, gizmos and gadgets," and "Good Buys," offered a step-by-step approach to getting the best deal on home purchases. For fun there was "Discoveries," the latest finds in home accessories (a mainstay since that first issue) and "Homescope," a horoscope "from the nest."

Home Style is our longest-running special publication. For nearly two decades, its content has evolved, and so has its look. Just last month we launched the magazine's first all-color issue. The constant has been the hospitable Richmond-area residents who give our readers a peek into how they live and work. Here are some of the people who opened their doors to us.

1. Local writer Reyn Kinzey offers a personal account of moving back into his family's North Side home after his mother's death. Though he makes the Pope Avenue home entirely his own, he finds that memories of the past -- grandparents, parents, siblings and friends — are what give his home its character. (1989)

2. After a client requests a design for a house that is "out of this world," Haigh Jamgochian responds with The Moon House. The crescent-moon-shaped oddity on Cherokee Road attracts the curious and gives its owners a panoramic view of the James River. One of only two projects completed by the visionary architect, the home is demolished in 2005 to make way for new construction. (1990)

3. The home of Vera and Marijan Gospodnetic is a standout in its bucolic setting in Goochland County. The striking three-story white stucco villa, with its geometric, spare design, makes few concessions to the past. "People are more concerned about the resale value of their homes than they are about their own aesthetic," Vera says in the story. The Gospodnetics prove they are an exception. (1991)

4. Pioneer perennial-breeder and gardener extraordinaire Andre Viette gives us a tour of his 210-acre Fishersville estate, complete with 14 greenhouses computer-monitored to provide the perfect growing conditions for his plants. Viette is host of a national weekly gardening show, "In the Garden," airing Saturday mornings on WRVA. (1992)

5. True and Charles Luck III open the "river room" of their Goochland County home for our readers. From their perch on a high bluff near a bend in the James, the Lucks have a 180-degree view of the river. The warm, inviting spot is their favorite place to watch storms coming down the James. (1993)

6. Virginia Commonwealth University president Eugene Trani and his wife, Lois, give us a glimpse of their reading room. The burgundy-red study, whose walls are covered with artwork, is appointed with Asian accents and filled with mementos from the couple's travels to China and Russia. The Tranis say they like to use the room for "Sunday-paper reading." (1994)

7. The brother-and-sister duo behind furniture maker McKinnon and Harris discuss their business and their design philosophy. Ever the sticklers for detail, Anne and Will Massie ensure that each piece of hand-wrought garden furniture is meticulously crafted. The Massies "wanted to re-create something which we felt had been lost," Will tells us — "the value and grace of something made by hand." The company continues that philosophy from its office in Scott's Addition. (1995)

8. "Retro Cool" is the title of the piece on the late Bryan and Kathryn Harvey. When musician Bryan and World of Mirth owner Kathryn bought their Church Hill home, they recalled in the story, it had two staircases, no walls and a backyard full of debris. They tackled the renovation room by room and filled their place with kitschy, fun pieces and found objects. It reflected their spirit, and they wanted to make their home warm and comfortable. Despite the tragedy that befell them, many Richmonders are trying to keep that loving spirit alive through good works in the Harveys' name. (1996)

9. We capture interior designer Robert Rentz in the living room of his new Fan home, a rich and luxurious spot with deep-blue chenille chairs, leopard-print pillows, an elegant chandelier and a huge gilt-framed mirror. Before moving in, Rentz had recently completed a beautiful renovation of a home near Davis and Monument that was destroyed by a fire. Undeterred, he bought this home and started again. (1997)

10. Prominent surgeon Dr. Joe Niamtu has just finished building his dream home on Cherokee Road when he and then-companion (now wife) April give us a tour. Niamtu scrapped the small brick rancher that originally sat on the spot and replaced it with an 8,000-square-foot contemporary, complete with juke-box, hot tub, state-of-the-art security system and an outdoor pool — all overlooking the James River. (1998)

11. Channel 12's Gene Cox shows us his suburban home and another side to his personality. The anchorman is also a woodworker who helps wife, Eleanor, an accomplished watercolorist, frame her artwork. Cox earned two patents for the devices he developed for framing in his home workshop. (1999)

12. We head to Regency Square to chat with the Duchess of York about entertaining, eating and family. While signing china plates for a crowd of 600, Sarah Ferguson reminisces about Princess Diana and gives us the guest list for her dream dinner party, which includes Margaret Thatcher, Cary Grant, Mother Theresa and Oprah. (2000)

13. The name Dennis Brumbach may not register at first, but his masterpieces will: He's the artist behind the quirkily beautiful trees dripping with lights on Monument Avenue at Christmastime. Richmond is extremely conservative, the sought-after designer notes, "but there are a few people who are not afraid, and these people have found me." (2001)

14. Sandy and Heyn Kjerulf faced a particularly vexing set of challenges when renovating their home in the Fan near Grace and Lombardy. Abandoned for 30 years, the structure was trashed and in disrepair. An even greater challenge was its layout: The 2,100-square-foot home was four stories tall and only 22 feet wide. The Kjerulfs recount their transformation of the neglected townhouse into a comfortable living space that is also a light-filled glass-and-steel showplace for their extensive collection of art. (2002)

15. In a piece on offices at home and work, Katherine Waddell takes us into her small office on the first floor of her Windsor Farms home. The cozy spot full of feminine touches was planned with the help of interior designer Sue Ellen Gregory. At the time, Waddell was chairman of the Republican Pro-Choice Coalition of Virginia; she's now an independent state delegate facing re-election in the 68th District. (2003)

16. We visit Leo Burke Furniture and speak with the store's namesake and founder, Leo Burke, and his son Jack. For close to 50 years, the store has been Carytown's go-to source for all things Richmond — Chippendale sofas, Duncan Phyfe tables, Regency lamps and Oriental rugs. "We're not the biggest," Jack Burke says, "but we want to be the best." (2004)

17. Interior designer Todd Yoggy lets us in on a secret: the 10 things he can't do without. Among them: his books, his iPod, his photography collection, and especially Victoria and Albert, his 100-pound Rhodesian ridgebacks. "I absolutely can't imagine life without them," Yoggy says. (2005)

18. There was a major leadership shift at VMFA when longtime director Michael Brand left for Los Angeles and the museum tapped the Dayton Art Institute's Alex Nyerges for the post. We visit the new director, Nyerges, and his wife, Kathryn, as they settle in at The Oaks, a mid-18th-century home in Windsor Farms. The Nyerges share how they blended their extensive collection of Chinese antiques with the colonial feel of this historic home. (2006)