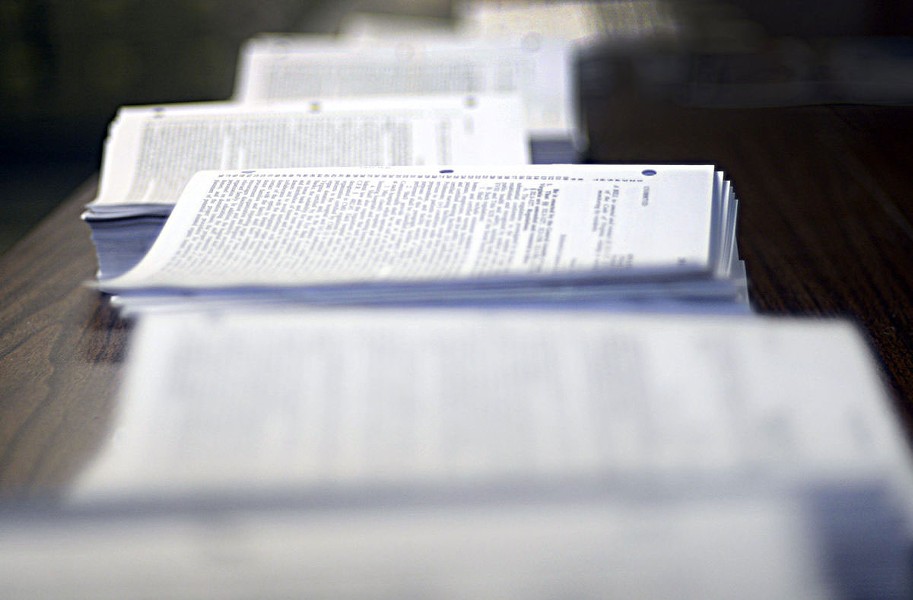 Amanda Lucier Bills that will be delivered to legislators sit on a table in the of the Bill Room at the Virginia General Assembly in Richmond.

Nearly 1,800 laws were passed during the 2017 General Assembly that wrapped Saturday.

Many deal with industry minutiae (the number of menhaden allowed to be caught in a year) or super-narrow provisions (allowing retired conservation officers to carry concealed handguns without permits).

But others could affect many of us in our daily lives when they take effect July 1. Here are a dozen.

Slower drivers who camp out in the left lane can be fined $250 (HB2201). Del. Israel O’Quinn, R-Bristol, told WTOP radio the change would address “a particularly pervasive and ever-growing problem of cars going grossly under the speed limit in the left lane.” He hopes the new penalty would encourage drivers to move over and cut down on road rage from drivers stuck behind slowpokes.

Judges will be allowed to use the words “parenting time” instead of “visitation” in custody cases (HB1456). Del. Dave Albo, R-Fairfax, said a partner who practices family law suggested it because parents who don’t get “visitation” rights say they feel like second-class parents.

“It’s a tiny little bill, but does a lot of good,” Albo said.

Women will be able to get a full year’s prescription for birth control at one time (HB2267). Currently women can get only one or three months at a time.

Advocates say women are more likely to use birth control continuously and consistently if they have a full year’s worth, leading to significant drops in unintended pregnancies and abortions.

If you’re a state trooper or other employee, a public school teacher or on a state college faculty, you’ll see some more income through the budget (HB1500). Although raises were in doubt after poor tax revenue reports, the state Senate and House of Delegates voted for 3 percent raises for employees and 2 percent raises for teachers. State trooper starting wages are going up significantly, and the budget also addressed pay compression for more veteran members of the force.

The raises go into effect July 10 and will be reflected in the first August paychecks.

The curriculum would cover law enforcement procedure and how drivers should respond. State education officials, police and others, such as the American Civil Liberties Union and National Association for the Advancement of Colored People, would help write the curriculum.

You’ll be able to buy a drink at one tavern, carry it outdoors and even to another establishment in certain pedestrian-friendly commercial districts under a new type of alcohol license (HB1987). The law was created for a Northern Virginia mixed-use center, but officials from Virginia Beach’s Town Center, one of the few Hampton Roads places that may qualify, have said they are not likely to pursue such a license. It does leave the door open for a developer to bring the idea to Hampton Roads.

Those convicted of a first-time marijuana offense will avoid an automatic six-month driver’s license suspension (SB1091). Another new law will make it easier for people with court debts to enter into a deferred or installment payment plan to avoid having their licenses suspended (HB2386). The bill sets a down-payment limit of $100.

What to Do After a Car Crash

Drivers will be required to move a vehicle from the road after a breakdown, accident or other emergency that did not result in injury or death if the vehicle is movable and the driver is capable of safely doing so (HB2022). Del. Ron Villanueva, R-Virginia Beach, hopes it decreases the length of time that crashes tie up interstates.

Local governments will be allowed to create registers of those who offer their property for short-term rentals through online sites like Airbnb (SB1578). The registries would give officials name and address information needed to regulate and tax the rentals. Those who don’t register could be fined up to $500.

Ticket buyers will be able to resell tickets on any online platform (HB1825). Some sellers, like Ticketmaster, now require ticket holders to resell on their secondary seller platform.

Del. Dave Albo, R-Fairfax, couldn’t go to an Iron Maiden concert, but his tickets drew no interest on the Ticketmaster resale site because the show hadn’t sold out

Drivers will be able to schedule their annual vehicle inspections with auto shops that have more than one inspection lane (SB1507). One lane would have to remain first-come, first-served, the only current option.

Hunters can make a new fashion statement this deer season. The law adds “blaze pink” or a hot pink color to the types of hunting apparel required during the regular firearms or special muzzle-loading rifle seasons (HB1939).