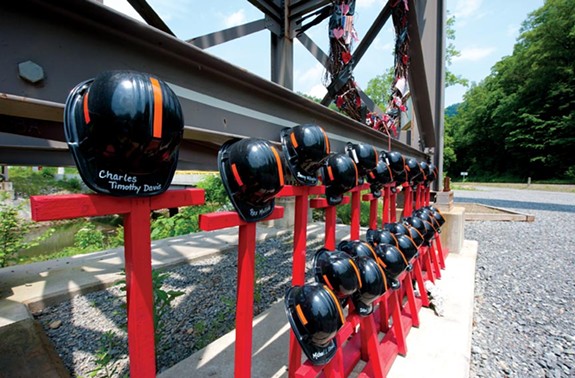 Five years ago yesterday morning, miners near Montcoal, West Virginia, clambered into low, truck-like vehicles called “mantrips” for a nearly hour-long ride to their positions at Upper Big Branch, a coal mine owned by a subsidiary of Richmond-based Massey Energy.

About seven hours later, the coal mine was ripped apart by a massive explosion, believed to be caused when methane flames touched off coal dust, killing 29 miners.

It was the country's worst mine disaster in 40 years. It also staged the demise of Massey Energy, which kept its headquarters in a four-story building built in 1950 at 4 N. Fourth St. downtown.

Tarnished was the Massey name, which can be seen locally on many signs of the tens of millions of dollars the family gave to the area in philanthropy, such as the Massey Cancer Center. The Massey family had sold its interest in the company about a decade before the blast.

That morning, some of the miners were queasy because the mine, known as UBB, was especially gassy, and had substantial air ventilation problems and lots of coal dust. The firm’s chief executive of Massey Energy, Donald L. Blankenship, was known as a hard-charging bean counter who liked to cut corners and maximize profits, investigators say.

While the shift neared its end, a “long wall” machine that rips into coal seams hit a clump of slate. Sparks flew from the badly maintained device. A jet of methane flame about the size of a basketball flared out. Safety measures, such as streams of water designed to extinguish such flames, didn’t work. As miners scrambled for their lives, an enormous blast, fed by high levels of coal dust, roared through seven miles of shafts. Several days passed before all 29 bodies were found.

So what’s been done to improve mine safety? Not very much.

Federal legislation such as the Robert C. Byrd bill that would give federal regulators subpoena power when probing safety violations has gotten nowhere in Congress.

Worried about slumps in coal production caused by as flood of natural gas from fracking drilling methods, the West Virginia legislature has come up with the “Creating Coal Jobs and Safety Act.” You read that right. The bill puts “jobs” first and “safety” second.

As West Virginia Del. Barbara Fleischauer of Monongalia County puts it: “There’s not anything in this bill that improves safety, nothing. And I can’t believe, after all the fires and explosions we’ve had in this state, recently, we would, and you know what they are; Upper Big Branch, Aracoma, Sego, that we would ever consider rolling back safety protections.”

The Associated Press reports that while mine deaths are down because of the competition against coal by natural gas.

But, the AP says, the coal dust problem hasn’t been resolved. Massey had been fined continuously for not keeping levels of coal dust low. There was so much coal dust in the mine that autopsies of dead miners (at least the ones that had enough lung tissue that could be recovered after the massive blast) all showed evidence of black lung disease, which was supposed to have been rooted out years before by regulatory upgrades.

Coal dust problems are still evident. In January, federal officials found excess methane and coal dust at Mill Branch Coal Corp’s Osaka mine in Wise County. Another mine, Camp Creek in Wayne County, West Virginia, was cited 64 times in the last two years for failing to follow ventilation plans. And a miner was recently killed at a showcase Virginia mine. (This was the same mine that Style Weekly photographer Scott Elmquist and I visited in 2011 for a book I wrote about Massey).

What do these mines have in common? They're owned by Bristol-based Alpha Natural Resources, which bought failing Massey Energy in 2011 for $7 billion. Alpha tried to absorb Massey miners and retrain them in its “Running Right” safety program, but it obviously has lingering problems.

Alpha has been laying off many miners because of the production downturns and lack of demand for both steam and metallurgical coal. After enduring millions of dollars in losses, its stock has been trading at a dollar and a penny.

Cash-short Alpha has had to sell its new headquarters building just off of Interstate 81 in the Bristol area.

Blankenship is slated to go on trial for criminal charges related to UBB in Beckley, West Virginia, on April 20. It's the first time a coal chief executive has been so indicted. Blankenship’s lawyers are trying to get a change of venue, saying that he's so well-known and disliked in southern West Virginia that he can’t get a fair trial. For a time, he won a gag order preventing anyone, including families of the deceased UBB miners, from discussing the trial, but it was overturned by the U.S. Fourth Circuit Court of Appeals in Richmond.

Blankenship's trial may be delayed, but it won’t be much of a victory. Alpha Natural Resources, meanwhile, is refusing to pay his legal bills.

The former Massey headquarters building in downtown Richmond has been sold and is being converted into apartments.