Will MeadWestvaco Merger Lead to Layoffs? 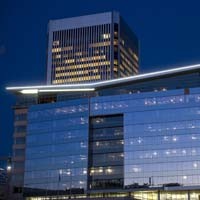 Mergers are popping out all over. This time it’s MeadWestvaco Corp, a Fortune 500 company with a modern glass and metal headquarters near the banks of the James River downtown.

MWV has proposed merging with Rock-Tenn Co. in a stock swap that would create a $15.7 billion firm.

Analysts have praised the deal because it seems a good fit for packaging. MWV makes smaller-sized packaging for retail giants including Wal-Mart, Amazon and Coca-Cola. Rock-Tenn, based in Norcross, Ga., makes cardboard packaging in larger sizes for such products as pizza delivery boxes.

What we don’t know yet, besides the new name for the combined firm, is how many layoffs it may bring. MWV, which moved to Richmond from Connecticut in 2006, has about 800 workers in the area.

MWV, which expects the merger to close in the second quarter, isn’t saying how many people will be laid off, but there are some $300 million in “cost-efficiencies” (corporate-speak for potential layoffs) that will be spread out within two years after the merger.

The new company will stay headquartered in Richmond but will move some operations to Georgia. MWV has been dropping businesses including forest holdings, paper mills and specialty chemicals.

It's another merger that will affect Richmond. Altria Group will be affected if shareholders vote Wednesday, Jan. 28, to merge the Reynolds American and Lorillard cigarette makers into a strong No. 2 behind the manufacturer of Marlboro, the country’s No. 1-selling smoke.