Musician Barry Bless of the Breakfast Cabaret is going to India. 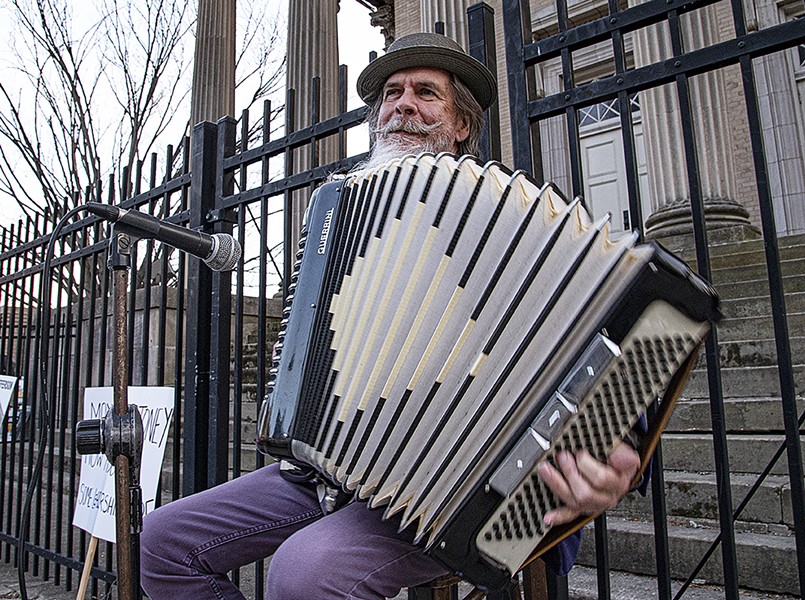 The latest resurrection of Barry Bless’ venerable concert series is another departure. If you're unfamiliar, his Breakfast Cabaret concerts are a freewheeling recreation of a Parisian coffee house with extensive, semi-tight arrangements and a deeply engaged, often thematically-costumed fanbase.

Most obviously, the music has been displaced to Natalie’s Lebanese restaurant during the evenings from 6:30-8:30 p.m. This is the second time it’s been relocated from its longtime weekly home at Crossroads Coffee and Tea off Forest Hill avenue, albeit with interim performances on a towable Wandering Cabaret stage and in Epicurean Gardens, the expansive greenery around Bless’ gloriously ramshackle Southside home.

But bigger changes are on the way --in particular, a hiatus. Artist Ron Lee, who provides the event’s fashion prompts (this week, it’s “blended boldness”) is headed on a pilgrimage to Paris. And crucially, Bless is departing for India.

For Bless it’s a big move, if not a permanent farewell. He plans to build on his nascent “Papaya and Paw Paw” musical collaboration with singer Vrushali Lele. It’s not his first trip abroad, he’s been to Europe, Mexico, and most recently two weeks in Cuba, where his daughter, Isadora Rae, studied with the Cuban National Ballet. But this three-month trip is more immersion than mere visit. It’s a leap of faith for a musical adventurer whose explorations, however far ranging, have mostly been conducted from the house he has lived in for nearly half a century. 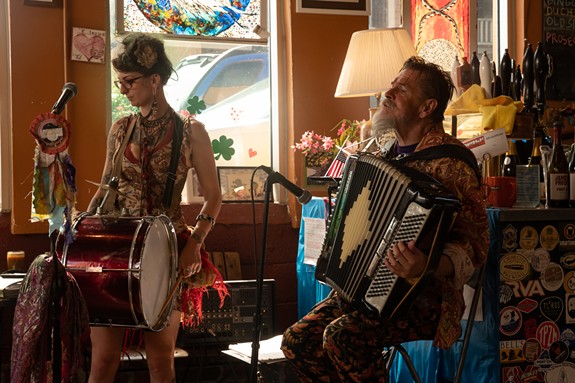 “I'm nervous,” he admits, sipping on coffee from a colorful cup in his brilliantly colored kitchen. “There is a certain amount of grief at leaving and fear when you are going to a new place. I have been thinking about this as a bon voyage, a gathering of support, not just cracking open a bottle of champagne. I really don’t know what I am going to be experiencing in India.”

He's taking his accordion, like the guitar an instrument whose portability and melodic and harmonic flexibility have been made globally ubiquitous by Christian missionaries. One of his goals in traveling abroad is to study the harmonium, a keyboard and cousin of the bellows accordion that has been integrated into traditional Indian music. “I’m there to learn,” Bless says.

The modal patterns of ragas have parallels with Western music, but it is a different expressive language. “There is a lot of playing with quarter-tones [i.e., notes between the familiar twelve-tone scale]’ he says. “But it is not microtonal in the sense of 20th century avant-garde music. The tonality is more playful than strict.”

The local bands Bless has played in always have a world music flavor, starting with the Ululating Mummies in the 1980s and progressing through the Indigenous Gourd Orchestra, the Happy Lucky Combo, to the Professor and the Madwoman duo with Twila Jane that mutated into the Breakfast Cabaret group. “I always wanted to play music that was more universal,” he says. “Not just for someone who is highly literate in harmonic theory, but to everybody.”

The evocative, sometimes exotic scales of modal music, which infused everything from the improvisations of Miles Davis to the guitar solos of Jerry Garcia, opened the gateway to “world music” – a marketing term that really just means the music is based on a global range of folk traditions. “That universality is what Indian music has. A raga is not just a scale, but the patterns you play within a scale,” he adds.

For the more-than-just-progressive Bless, whose Breakfast Cabaret playlists are liberally sprinkled with revolutionary songs, there is an element of rebellion in the embrace of non-Western forms. “I started playing cello in 4th grade and grew up in a setting where classical music was thought to be superior to all others, and musical evolution was straight line rather than an ever-branching bush,” he explains. The critical point came when he was 14 and a friend showed him a minor blues scale on his family piano. “It was like hearing the truth for the first time,” Bless recalls. “Even now, sometimes when I revisit the songs I have written since, I realize that they all relate somehow to that minor blues scale.”

A glimpse of his next music can be found on the Papaya and Paw Paw page of his YouTube channel (see above). There is a cover of “Chaand Baaliyan,” a song that became a number one hit in India after Bollywood stars started championing it on Instagram, and several short travel videos by Lele, with music by Bless. The bluesy improvisations embrace Indian sonorities behind images of a train traversing a verdant countryside, the tree-shrouded drive to a utopian collective, rolling waves, and a full moon over the Bay of Bengal. It’s a lovely evocation of places the musician has not yet been.

Given a lifelong affinity for world music, why has it taken so long for Bless to take such a deep dive? “It has always been my intention to be open, to see the world within this grain of sand [Richmond],” he says. “Many people who are habitual travelers just take their world with them, surrounded by people who share their interests, going to places where they will feel comfortable. I can find more diversity than that here.”

Bless notes that it's possible to move through your hometown as a world traveler with what the Buddhists call beginner's mind. “I can walk three blocks over and see something I have never seen before and appreciate it as if I had spent thousands of dollars to see it,” he says. “So that is the challenge for me, to see and experience the world in Richmond. And to try and welcome others, like immigrants, to join me.”

In India, Bless will be the newcoming outsider. The future is uncertain, but he is looking forward to it. And while he’s gone, the Breakfast Cabaret will be on temporary hiatus. 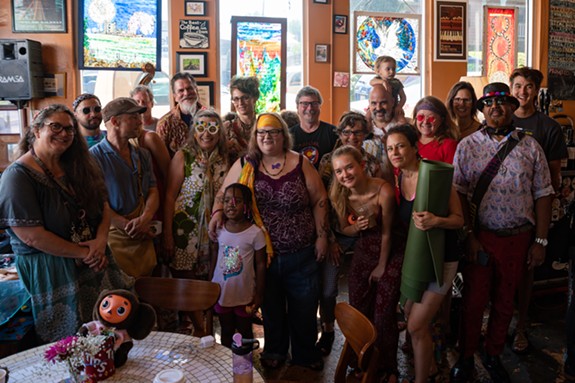