His mother, Cynthia Vaughan, who lives in the Southside, says the first thing she did upon reading his post was to burst out laughing. “I am so proud of him. I was proud of him before he won the Emmy and I am even more proud now,” she says.

In an interview today, Glass says he was inspired to create and found "Mending Walls RVA" by a conversation he had with fellow artist and collaborator, Matt Lively, about community unrest in Richmond after the murder of George Floyd. “The Black Lives Matter group prompted us to conceive of constructive ways we could talk about race, social justice and equity in Richmond,” says Glass. 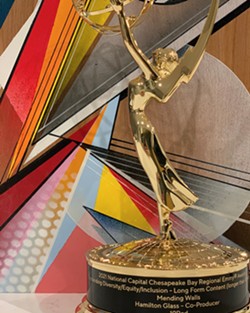 Glass is quick to point out and emphasize that the Emmy-winning doc is the result of several partners coming together to support his idea of using art to stimulate empathy and understanding among all people.

“First of all, I am grateful to my mother for pushing me to develop my artistic talents and for believing in me,” Glass says.

He also praises the collaborative efforts of Fuel&19Red video production service and the various artists and citizens of Richmond who volunteered and participated in the effort. Producer 19RED is the multiple Emmy-winning production team that also produced "The Art Scene." Others involved with the "Mending Walls RVA" doc included Pam Hervey and Todd Hervey as producer/directors and George Parker as an associate producer.

In addition to the Emmy, the film recently tied for best feature documentary in the Fine Arts Festival in Venice, California. The film was presented by VPM.

“This Emmy is everything! It is so affirming and hopeful that so many people could come together, tell history and engage in difficult conversation through art,” he says.

So what’s next? According to the Mending Walls website, the group is launching another wave of public art projects and collaboration with non-profit organizations to encourage conversations, healing, and connections to continuously progress after the social unrest that followed George Floyd’s death.

According to the website,"Transcending Walls" is a collaboration between Mending Walls and Richmond Hill. "During the spring and summer of 2022, we will plan, engage, and execute a mural project for the approximately 500-foot wall that borders the south side of the Richmond Hill property. This work will involve community members, artists, partner organizations and Richmond Parks and Recreation," it reads.

“The big idea,”Glass says, “is to transcend the walls that divide us, to find ways to ways to build empathy and connection, to make the world a better place."

Style Weekly is owned by a VPM subsidiary.

Correction and clarification: Community Foundation of Greater Richmond and Altria provided support to the Mending Walls project, not the documentary itself. That was unclear in first version of this blog post.