Being There: Recording Antonio Carlos Jobim at Spacebomb Studios

A visitor enters Spacebomb Studios through what seems like a dressing room in the Rosewood Clothing Company on South Robinson Street. Sunlight comes through a rectangular cutaway in the wall, filtered through a curtain of racked dresses.

The informal front office décor is a blend of design studio, industrial chic, and modern loft apartment. Further back behind sound-insulating double doors is the control room, and beyond that the performance space. The floors are covered with Persian carpets, the walls lined with instruments, and decorated with colorful designs in the Spacebomb house style. On this hot last Sunday in May it is full of musicians. 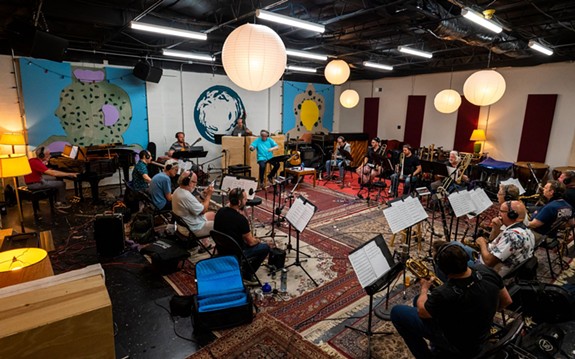 This is the third session recording of Doug Richards' arrangements of the work of Brazilian composer Antonio Carlos Jobim. One of the most important musical voices of the 20th century, Jobim was the “father of the Bossa Nova,” a revolutionary style that combined sophisticated harmonies and unconventional syncopations that still sounds fresh 70 years after it’s mid-century popular heyday. Many of Jobim’s songs have become standards. “The Girl from Ipanema,” from his collaboration with saxophonist Stan Getz, is, according to the Performer Songwriter magazine, second only the Beatle’s “Yesterday” as the most recorded pop song in history. (For good reason, the melody is beautiful, even if the original lyrics lose their poetic transcendence in translation.)

Richards, the formidable composer/arranger/emeritus professor who led the VCU Jazz Studies program in its early glory days, dove into the Jobim songbook during the COVID lockdown. In part, the appeal was the potential to do something innovative building on Jobim’s knotty harmonic and rhythmic structures. Laura Ann Singh, of Miramar and Quarto Na Bossa, had the vocal strengths to shine in bracingly challenging settings.

With Singh out of town for a Miramar gig in Brooklyn, the focus on this session was music. Arguably the biggest challenge was “One Note Samba.” Richard’s arrangements are always challenging, and this included intense ensemble sections that required exceptionally high precision. 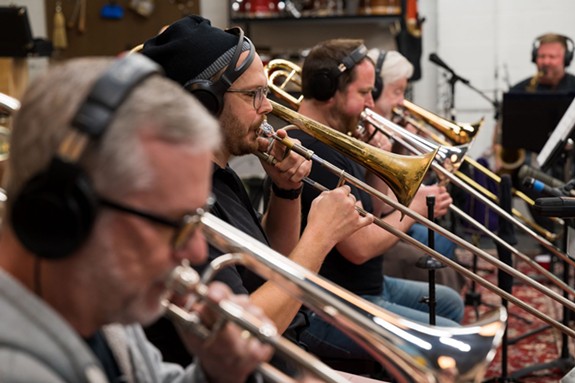 In live performance, a mistake is swept away in the next note, but a recorded one is forever. The potential for a “clam,” a missed note or rhythmic misstep, scales with both the size of the band and the complexity of the arrangement. Even following along with a score, like with Pollard or Richards' compositional familiarity, it is a daunting challenge to detect fleeting errors in 17 complex and simultaneous musical performances.

It helps that the players call their own fouls, speaking up if they missed an entrance, or feel that they could have played a section better. 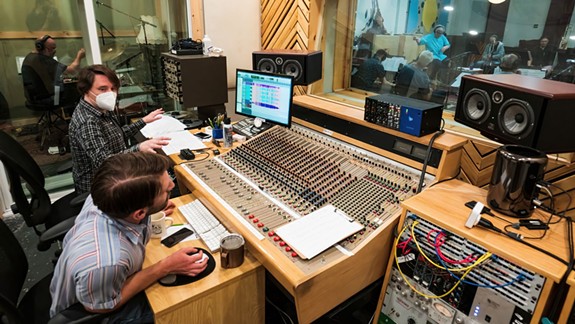 Each piece is recorded all the way through multiple times. Then alternative takes are made of sections that presented the most difficulty. A metronomic click track fed through the musician’s headphones, ensures consistency of tempo. Although almost every note, excepting solos, is specified in a complete score, the piece still evolves around the edges.

When there is a critical mass of material, the action shifts to the control room to listen (and to read) the score along with the playbacks. The sections are identified with letters and aligned in the playback so that it is relatively easy to compare takes. With a first-rate group of musicians, many ex-students of Richards, highly motivated to play his brilliantly knotty arrangements, any mistakes are anything but obvious.

The goal is not finding an entirely error-free take, but enough coverage so that the problems are minimal and the flaws can be sonically patched. Then the final challenge of production begins, mixing the dozens of tracks to deliver a product with the polished transparency for the ideas to shine through. 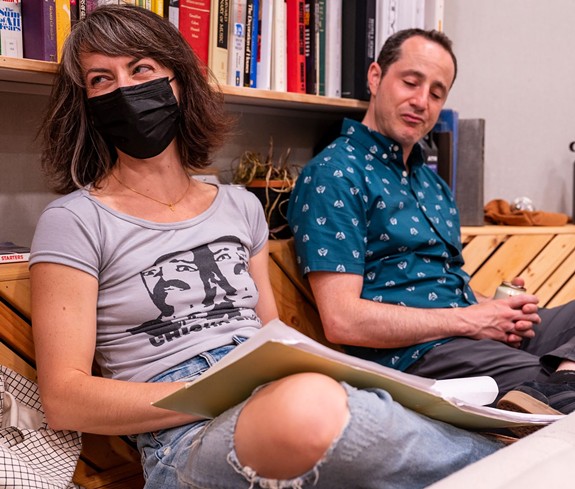