Updated: Over the James Festival featuring Avail coming in August to Brown's Island

One of Richmond's most legendary punk bands is playing a big outdoor gig when Broadberry Entertainment Group presents Over the James 2022 at Brown's Island, featuring Avail with Quicksand, Cave In, Ceremony, Screaming Females and Terminal Bliss.

The show, named after Avail's classic 1998 album, "Over the James," will take place on Saturday, Aug. 6.

**Update: Also, Avail frontman Tim Barry will be performing solo on Thursday, Aug. 5 at the Richmond Music Hall, which will mark his first solo RVA show in nearly three years. Also on the bill are Andrew Alli & Josh Small as well as Sally Rose. 7 p.m. sharp. 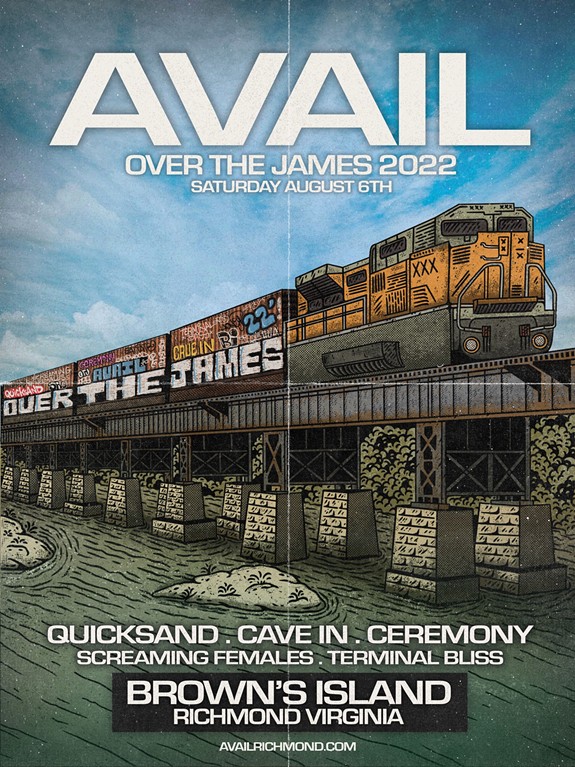 Tickets for the big Avail event go on sale this Friday, April 29 at noon (According to Barry's FB page, "a very limited number of tickets will also be available in person w/ a reduced service fee at Plan 9 Records in Richmond").

The event is rain or shine and gates open at 3:30 p.m. with music beginning at 4:15 p.m. According to a release, "beer and canned cocktails will be available for purchase and there will be food trucks on the island." Coolers, outside food, and outside beverages will not be permitted.

Although Avail never officially broke up, the band pretty much stopped touring in 2007 and shows are a celebratory event with fans traveling from all over. The band played memorable reunion shows at the National in 2019. Visit thebroadberry.com for more information.

In the meantime, yeah "why are we overwhelmed with rules today?" We'd like to know. Please. Somebody effing tell us. Here's an early banger from the boys that we always liked: "Connection."