Stuff to do this Week

Yes, the Amazing Acro-cats are back in town plus more great bands ... 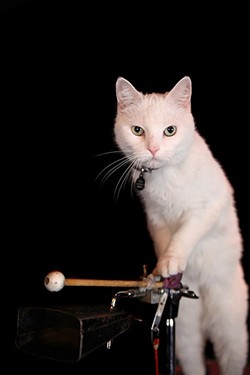 The Amazing Acro-Cats at the Libby S. Gottwald Playhouse in the Dominion Energy Center for the Performing Arts

If you love cats, you’ve probably already got this one marked down. If not, then by all means don’t miss this frisky troupe of performing house cats and their two-hour long “purrformances” that include riding skateboards, rolling on balls, jumping through hoops and a oh-a-whole-lot more. Such as the big finale, which includes the only all-cat band on the planet (according to their press release): Tuna and the Rock Cats! featuring St. Clawed on guitar, Bue on drums, Nue on keyboard, Ahi on woodblocks, Albacore on cowbell, Roux on trumpet, Oz on sax, and Cluck Norris on tambourine. Pretty much sounds like the most exciting thing to happen in Richmond in about two years. We think it’s been two years. Could be five. Feels like five. And yes, this is that cat band you saw on PBS. Just go. Stay safe. Watch cats. Presented by Rock Cats Rescue. Shows at 7 p.m. each night though there is a 3 p.m. on Saturday, Sept.4 and a 2 p.m. on Sept. 5. Visit dominionenergycenter.com for more details.

Fear of Music and Afro-Zen Allstars at the Broadberry

The great local tribute to the Talking Heads, easily one of the best in the world, returns to a familiar stage to make the people dance, herky-jerky like, right out of their massive oversized suits, or facemasks as the case may be. Don't miss groove-heavy openers, Afro-Zen Allstars. The doors open at 8 p.m. Show at 9 p.m. $12 in advance, $15 day of show. Vax card or recent negative test within 72 hours required. thebroadberry.com.

Charley Crockett and Joshua Ray Walker at the National

We took the time to watch the YouTube videos by Mr. Charley Crockett, who hails from the same small Texas town as the great Freddy Fender, and at first we thought it might be NBA great Steph Curry pulling a Garth Brooks side project deal. But nope, Crockett is legit at playing that old school roots country and blues, while also effortlessly shifting to countrypolitan soul and good ‘ole honky tonk vibes. As local music fan, deejay and veteran booker Todd Ranson remarked: “Like early Dwight Yoakam and a male Lucinda Williams.” That sounds legit to us. He’s prolific too, having released eight albums in six years, his last one, “10 for Slim: Charley Crockett sings James Hand,” came out in February. To check out his originals though, you’ll want to look up his acclaimed 2020 album, “Welcome to Hard Times.” 8 p.m. $22.50 in advance, $27.50 day of show. Vax card required or negative test within 72 hours. All ages. thenationalva.com.