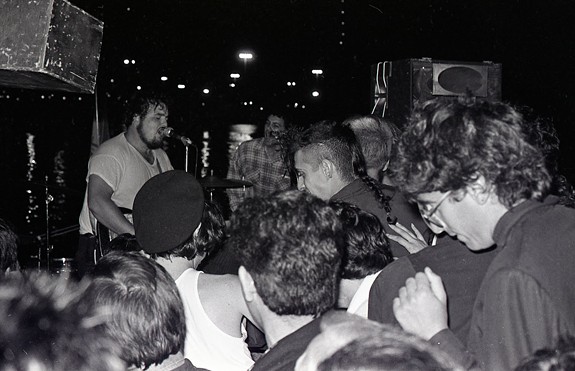 Concertgoers who came of age in the ‘90s had a steady flow of music festivals with goofy names: Lollapalooza, Coachella, Bonnaroo and Ozzfest, oh my. It's too bad Gibby Haynes of the Butthole Surfers never started his own outdoor festival called Wallhonkler, because it would've been right at home.

At least ticket prices back then were still reasonable. I can remember visiting an ex-girlfriend in San Clemente, Ca. (home of Richard Nixon's sprawling beach estate) and deciding at the last minute to check out the inaugural day of Coachella in 1999, where acts such as Beck, Spiritualized, the Chemical Brothers, Morrissey and Medeski, Martin and Wood performed around a sun-scorched polo field lined with palm trees. The tickets were $50 each and I think that included a late night Ferris Wheel ride.

Soon music festivals went full-on obscene with those absurdly expensive V.I.P. packages; even daily general admission at Coachella now runs a whopping $429 per ticket. The bands aren't better but for that new price you just might catch sight of a B-list celeb snapping selfies near the bad trip tent. Or more likely, wait hours in line for a $20 bottle of warm Corona while a drunk 15-year-old pukes florescent glitter at your feet, or maybe that was Goldschläger flakes. Just what is the point?

Lollapalooza, Perry Farrell's successfully packaged lifestyle tour of alt. rock, punk and hip-hop, started out with a carnival sideshow atmosphere, while the more visually stimulating Burning Man fest felt like its apocalyptic cousin on a weeklong break from society (and clothing) in the Black Rock Desert. The inspiration for both these cultural touchstones came from the fertile early ‘80s punk scene in Los Angeles, as director Stuart Swezey recounts in his entertaining music documentary “Desolation Center.”

Swezey was an early organizer of short-lived experimental shows which began after the militarized LAPD crackdown on the punk music scene. The idea was to hit the road and produce guerrilla concerts, collectively known as Desolation Center, every other weekend in the Mojave Desert, shunning advertising, press coverage and profits in favor of more spontaneous, secret happenings. Attendees hopped a school bus from downtown L.A. to an undisclosed location to party with the punkers from the Minutemen and Einstürzende Neubauten to Swans, Meat Puppets and Sonic Youth ("Death Valley 69" fits well). The Mojave was a perfect wide-open space for this surreal wedding of anarchic music, percussion, fiery chainsaws and sparks flying beneath dramatic natural settings not unlike Tatooine from "Star Wars," which was filmed nearby in Death Valley National Park.

The key thing Farrell took away from these shows? “You have to concentrate on being a great curator," he says in the doc. Later, I caught one of his Lollapalooza line-ups in Raleigh that included a daytime Nick Cave and the Bad Seeds set, A Tribe Called Quest, the Boredoms, Beastie Boys (and even some college friends Blast Off Country Style played the second stage). Still it was nothing like the full moon theatrics at Desolation Center, where dangerous explosives were set off by folks on "black gelatin acid." Few organizers would be dumb enough to risk such liabilities today.

Swezey relies heavily on archival footage supplemented by new interviews with well-known participants such as Mike Watt or Thurston Moore, plus organizers and other attendees. But even with all the vital bands, none of the performances are shown in full and no extras are included on the DVD. I'm not sure why: maybe it cost too much to clear the rights or restore the footage, or maybe complete footage was never available to begin with. The main reason I wanted to watch the doc was to see these legendary groups cut loose. The commentary is fine, providing historical context that makes a case for the DC shows having a more prominent place in punk lore. But the thing could've really used complete footage of a few memorable songs. Just sayin'.

Regardless, “Desolation Center” is worth watching as a history lesson for fans of this innovative crossbreeding period for punk, industrial and No Wave. The same communal, DIY spirit continues to flourish today in everything from noise and experimental scenes to Ian MacKaye’s insistence on performing in nontraditional venues, to well-curated festivals from Levitation in Austin to Pickathon in Portland, and all the great ones I'm not young enough to know anymore.

Just remember, for the same price it costs to go to Coachella, you could stage your own strange little festival by the river, or in a local park -- just leave the explosives behind.

You can purchase the "Desolation Center" DVD here and find more information on screenings.