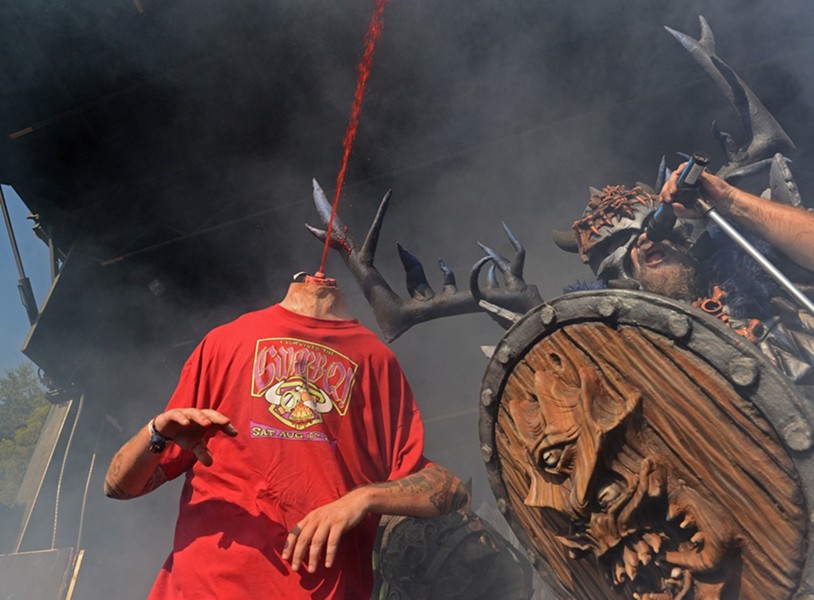 Frontbeast Blothar belts one out at GWAR-BQ in his first performance with the band.

UPDATE (Sept. 14): Broadberry Entertainment Group has announced a second drive-in show for GWAR after the first concert sold out quickly. The second show will also take place on Saturday, Oct. 10, in the parking lot at The Diamond. The lot will open at 5 p.m. and the show will begin at 6:15 p.m.

I’m sure you remember drive-in movies of yesteryear like “The Giant Gila Monster,” “Wasp Woman” or “I Bury the Living”? Now that drive-in concerts have become an ongoing thing in 2020, it’s about time that Richmond’s legendary intergalactic metal gods got in on the creature feature action.

Broadberry Entertainment Group will produce a concert by GWAR on Saturday, Oct. 10 in the parking lot of the Diamond at 3001 North Arthur Ashe Blvd., where Ponyboy and Sodapop Curtis and their friend Bathtub Crank Mike may cut a hole in a nearby fence to grab a choice spot. No, but really: Vehicles will be parked in a socially distant manner and ticket holders can sit directly adjacent to them in black lawn chairs or on blood-soaked blankets, for example.

But don’t think social distancing means you won’t get doused with bodily fluids at this GWAR show, though, or have Tucker Carlson’s severed head possibly come to a rolling stop on your picnic blanket. VIP Spew Row tickets are still available.

“We are going with the creature feature angle,” says Blothar the Berserker, the band’s lead vocalist. “Fall is the time for warm cider, the smell of burning leaves, and a traumatic night at the drive-in with GWAR! Turn on your windshield wipers, people. It’s gonna get messy at the old Diamond.”

Of course, a pandemic to end the wretched human race is definitely in the spirit of GWAR’s original artist statement, so this is likely to be a celebratory performance. And by this point in our human evolution (or devolution), the band probably has a lot more folks in agreement since they started in the 1980s.

Concert attendees may not leave the vehicle area except to use the restroom and must wear masks when doing whatever nasty business there. Remember: Two axle vehicles only and you purchase a single ticket per vehicle, with no more than four people per vehicle, including children (why does that sound like a felony?)

You can add a hotel room at the Graduate Hotel which comes with an autographed Scumdogs poster; merchandise will not be available at the show to avoid long lines, but you can get it online. Tickets go on sale Friday, Sept. 11 at noon at www.thebroadberry.com.