The Juilliard School’s competitive Lila Acheson Wallace American Playwrights Program selects only four or five writers each year, so when Brittany Fisher received word of her acceptance to the program, she was “super humbled.” 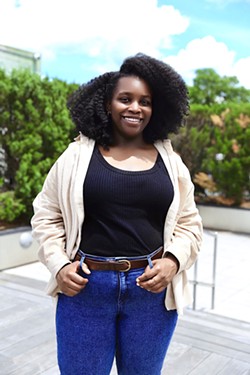 “I know that I share this dream with an abundance of other talented humans," Fisher says. "And I’m just thankful there were people in place who believed in my work."

Fisher has been writing plays since college at James Madison University, quickly gaining recognition from the professional theatre community. Her play "Red" was featured at the Kennedy Center American College Theatre Festival in 2015, and three years later Fisher was named one of the first Cadence Pipeline Fellows.

The Cadence Pipeline Fellowship awards five Virginia playwrights the chance to develop their new work with Pulitzer Prize-winning playwright David Lindsay-Abaire. Through her work with the fellowship, Fisher completed the play "How to Bruise Gracefully," which served as her writing sample for her Juilliard application.

“I truly believe that none of this would have been possible without the stepping stones provided by the Richmond theatre community and the people who simply gave me chances to learn, spaces to create, and room to grow,” Fisher says. “I want to continue telling stories rooted in topics that inspire me and that I hope can inspire others. I’d like to think that the art I create is less about me and more about what it can bring to the people who so graciously take the time to see it.”