Big congrats to high school senior, Jasmine Mason! During a time when everyone seems down, for good reason, Mason is turning heads with her striking art work, which just won her a major national scholarship award.

Jasmine, currently finishing up her senior year at Henrico High School's Center for the Arts, was recently awarded the gold medal in the 97th annual Scholastic Art and Writing Awards, the top honor in the nation's longest running scholarship program for creative teens.

Mason won for her striking portfolio "Waiting ..." in which she "investigates life and the act of waiting through the documentation of real situations in her community where her neighbors wait for everyday necessities" during the pandemic.

She was one of only 16 students selected in the country and she will be awarded a $10,000 scholarship, one which has been previously earned by the likes of Stephen King, Joyce Carol Oates and Andy Warhol.

Style reached out to Mason via email to learn a little more:

Style Weekly: How do you feel about winning and where do you plan to use the scholarship?

Jasmine Mason: Growing up in a lower-middle-class black family, I always learned not to get my hopes up very often, so when I found out that I won, it was a very surreal moment, and I still can’t quite describe how I feel. I plan on using the scholarship at Columbus College of Art and Design.

How did you come up with the idea for the series? What community is featured?

As a senior in the art program that I’m in, seniors have to create a portfolio of eight cohesive pieces that explore an exciting theme. When I was choosing subjects to paint, I noticed that all of my subjects had two things in common: they were all waiting, and they were all ethnic. Upon learning this, I decided to investigate this idea further. Through my investigation, I learned that the city of Richmond/Henrico, where I live, is deeply segregated by economic status. At the same time, predominately white people in the west end are privileged enough to have personal transportation and higher-paying jobs, predominantly ethnic people like me in the east end use public transport and have 9-5 lower-paying jobs.

What did you feel like you learned while doing this project?

Working on the project, I learned disenfranchised communities are always waiting for change and are continually overlooked.

Why do you think art is important and what do you want to do as a career?

I think art creates a visual language that transcends different languages and cultures [to] bring different opinions and ideas together.

I plan on owning an architecture company and designing community centers that help disenfranchised neighborhoods improve. 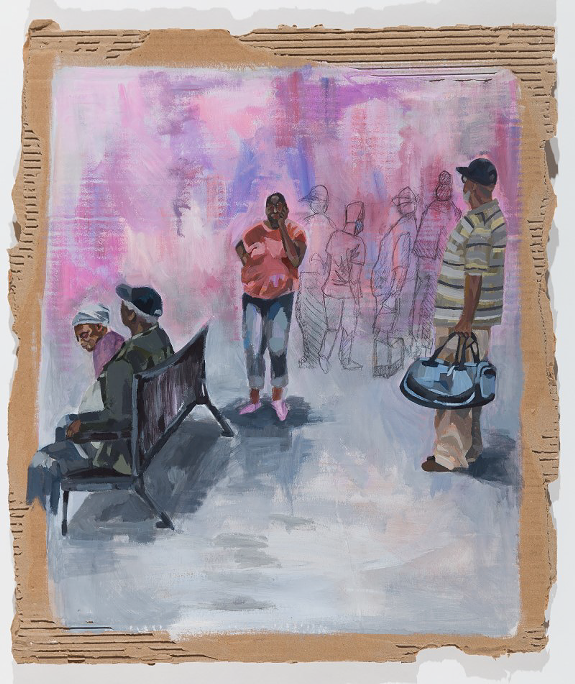