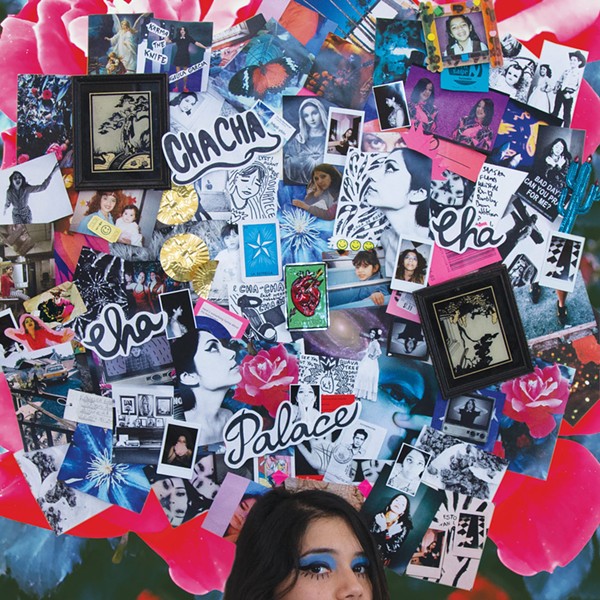 Angelica Garcia’s “Cha Cha Palace [Spacebomb]” is a convincing, grand scale, heartfelt and humorous romp through the haunted borderlands between cultures. Her lyrics are rooted in her East LA Mexican/Salvadoran heritage. Her powerhouse band is the RVA cohort she’s supported for years as a backing singer. The voice is all hers, swooping, confessional, teasing, defiant, doubled, tripled, multiplied into a multilayered Angelic chorus in the wall of sound production. She’s capable of exploding with such next-level intensity that it sounds like she is breaking into song even when she was already singing.

Most, if not all, the songs may be familiar to those who’ve seen her on stage, either with a full band or one of her stripped-down looping solo performances. Sequenced into a single set, sometimes segueing seamlessly from one piece to the next, they become a unified cycle, centered on identity but also touching on spirituality, feminism, love, temptation, and justice. The critical bonding element is Garcia’s vocals, a commanding combination of Bjork intimacy, Kate Bush melismatic control, and a swarm of other ingredients into something sui generis.

Images echo across songs. Numbers with full-tilt intensity are separated by short, quieter pieces evoking Latin heritage -- a haunted version of the romantic mariachi standard “Le Enorme Distancia,” and “La Llorona,” a brief, lovely take on classic folk legion akin to Medea. The latter leads into the hyper-romantic “Valentina in the Moonlight.” The opening of that song recalls the more intimate sound of her 2016 debut “Medicine for Birds,” but it quickly swoons into something more cinematic. It’s as good an encapsulation of the beauty and risk of “Cha Cha Palace” as any. The album has a lot of other attractions. “Jicama,” singled out by Obama for his “best of 2019” playlist, appears three times without wearing out slyly cutting charms. “It Don’t Hinder Me” is a defiant, autobiographically specific romp through her El Monte home neighborhood. “Guadalupe” builds a feminist anthem on the somewhat unlikely foundation of a famous apparition of the Virgin Mary.

But “Valentina,” with its heroine perched on a precarious rooftop for a chance glimpse of a longed-for future seemingly forbidden by her heritage, is a quiet, clear revelation of the risk and ambition swimming through the swirling, propulsive currents of “Cha Cha Palace.” “The heart doesn’t always lead us to safety,” Garcia sings. “But now more than ever, it knows what’s best for me.”