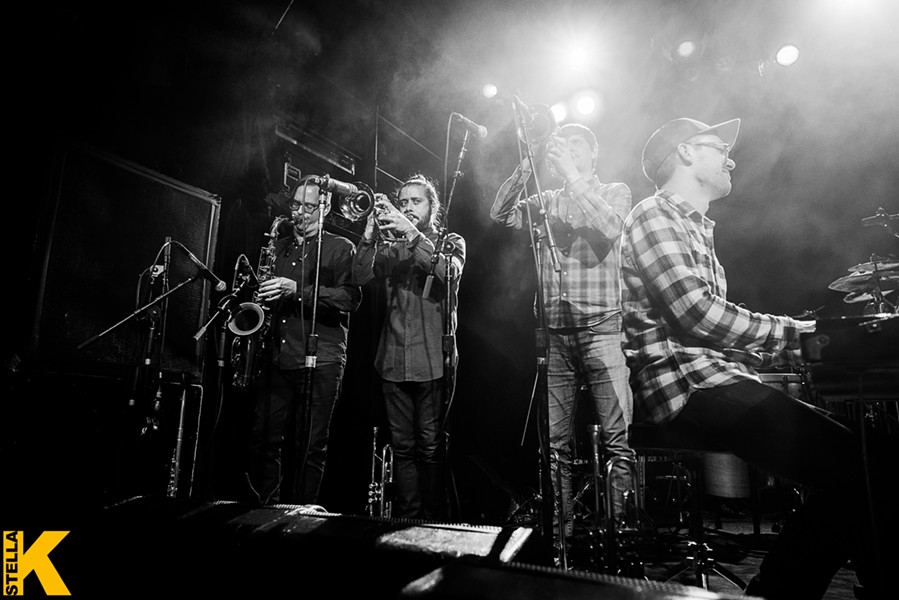 Snarky Puppy is a swiss army knife of a band, not so much transcending genres as folding them all into a tightly crafted, multipurpose package.

The band is very much a collective, over time including as many as 50 players, many with roots in the great music program at North Texas University, centered on somewhat self-effacing leader bassist Michael League.

“Never call us a jam band,” League says, a request that belies a swarm of online classifications. “We are not in that category. It’s thoughtful music that grooves. I wouldn’t describe us as jazz, but it’s jazz-based.”

The three Grammys they’ve won were in contemporary instrumental and R&B performance categories.

“It took us ten years to be an overnight success,” he says. “It’s the result of a lot of little goals, baby-stepping. If you have organic growth, then it’s sustainable.”

League is the constant in the rotating lineup, although several others make most of the band’s 100-plus gigs a year. They played the Camel in 2012 and UR in 2014, and various members have appeared here in other groups.

“We’ve never played the National,” League says. “And we’ve released two CDs since the last time we were here. There’s a whole lot of new material, and even so we see a lot of growth from night to night as we get ever more in tune with what we enjoy doing."

After 15 years, League feels they’ve built trust in their audience, which frees them to take chances.

“We don’t need to please everyone every time,” he says. “If they don’t like a record, they will wait for the next one.”

They may not be a jam band, but they do attract an audience open to expecting something other than mere recreation of their recording.

“It’s fun to play in a nice room for a lot of people,” he says. “And it is all part of the journey.”