Exhibition offers the opportunity to stay overnight at the museum through an immersive hotel experience. 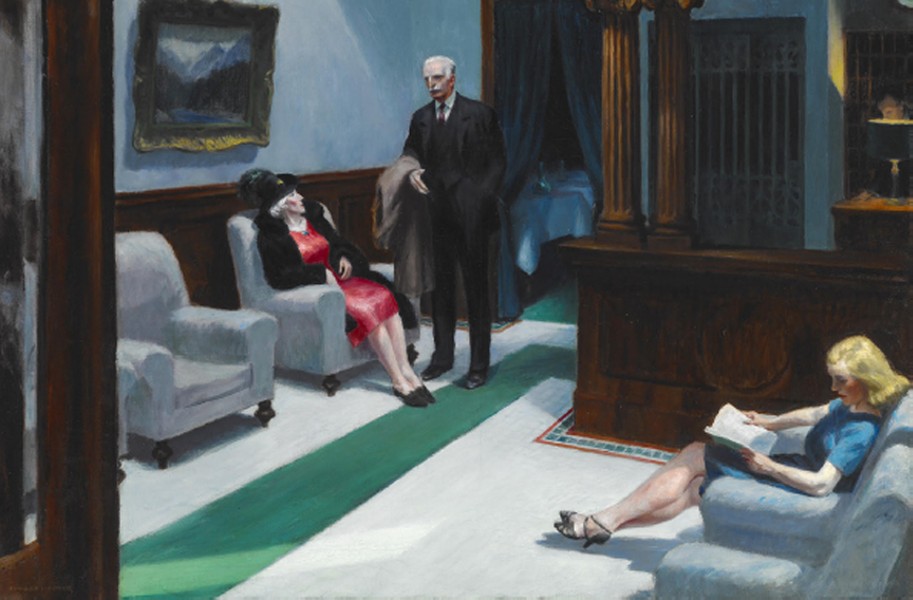 The Virginia Museum of Fine Arts has announced that "Edward Hopper and the American Hotel" will premiere at the museum on Oct. 26, the only East Coast venue for this major loan exhibition.

The exhibition, which is in partnership with the Indianapolis Museum of Art at Newfields, will showcase more than 60 of the famous 20th century artist's paintings, drawings, watercolors and illustrations. The exhibition also features a rare opportunity to stay overnight at the museum through an immersive hotel experience.

Style will have much more on this show, including how guests can score passes to stay overnight, as soon as VMFA lets us know.

One of the cool things about Hopper's work, an office artist tells us, is that if you squint past his figures in the foreground, you can see how great an impressionistic painter he was by the background shapes.

We're down for this exhibit.

Read more in the lengthy press release from the museum:

Edward Hopper and the American Hotel represents the first investigation of the artist’s canonical images of hotels, motels and other hospitality settings, thus expanding the terms of alienation and fragmentation in which Hopper’s art is often discussed. Also included are 35 works by American artists that similarly explore the visual culture of hotels, travel and mobility from the early 20th century to the present. Curated by Dr. Leo G. Mazow, VMFA’s Louise B. and J. Harwood Cochrane Curator of American Art, Edward Hopper and the American Hotel will be on view Oct. 26, 2019–Feb. 23, 2020.

As part of this exhibition, VMFA will recreate Western Motel, one of Hopper’s best-known paintings, as a three-dimensional simulated motel space, giving visitors the chance to “step inside” his work. Through the “Hopper Hotel Experience,” guests will have the opportunity to stay at the museum overnight in a room inspired by Western Motel. There will be a variety of packages available at different price points. Some of the “Hopper Hotel Experience” packages consist of dinner at VMFA’s fine dining restaurant Amuse, a guided tour by the curator and an exhibition catalogue, among other options. Reservation details for the “Hopper Hotel Experience” will be released later this month. This is the first time that VMFA has recreated a work of art in a three-dimensional space and made it available to stay in overnight.

VMFA has had a long relationship with Hopper, starting with his role as chairman of the jury for the museum’s first biennial exhibition in 1938. In 1953, the artist returned to VMFA as a juror for that year’s biennale exhibition. At that time, the museum purchased Hopper’s 1935 painting House at Dusk, which will be on view as part of the exhibition, along with loans from New York’s Whitney Museum of American Art and Metropolitan Museum of Art; the Philadelphia Museum of Art; the Thyssen-Bornemisza Museum in Madrid, Spain; and numerous other museums and private collections. Among the private lenders are Grammy-award winning musician Bruce Hornsby and his wife Kathy, who are lending six never-before-exhibited Hopper drawings to the exhibition.

“Each of our curators is tasked with creating exhibitions that provide new narratives about the collection and engage visitors with works of art in a unique way,” says Virginia Museum of Fine Arts Director Alex Nyerges. “We are thrilled that through this historic exhibition, VMFA’s visitors will be able to interact with and learn from extraordinary paintings, drawings and illustrations by Hopper, as well as works by renowned artists such as Richard Caton Woodville, John Singer Sargent, Charles Demuth, Reginald Marsh, Edward Ruscha and Cindy Sherman.”

Edward Hopper and the American Hotel also features selected diaries written by Hopper’s wife and fellow artist, Josephine “Jo” Hopper, which were only recently made available to the public by the Provincetown Art Association and Museum. Jo’s diaries describe not only the drive between their homes in New York and Cape Cod but also their numerous extended road trips throughout the United States and Mexico. Along with her diary entries, the exhibition showcases hotel postcards from the 1920s through the 1950s featuring places that the couple visited together. The postcards and diary entries are rarely seen primary sources that humanize the artist and his wife, providing detailed accounts of their travels in their own words and personal responses to the places they visited, their experiences there and how these trips informed their art.

“Edward Hopper is one the best-known 20th-century American artists, yet the public’s conception of him has largely been filtered through a time-worn biographical formula that explains his art as the product of a sullen, isolated introvert,” says Mazow. “Edward Hopper and the American Hotel endeavors to consider hotels, motels and other transient dwellings as vital subject matter for Hopper and as a framework with which to understand his entire body of work.”

On Oct. 25, Mazow will provide an overview of Edward Hopper and the American Hotel during the exhibition’s opening lecture in VMFA’s Leslie Cheek Theater. The museum will also host “Edward Hopper: Hotels and Other Spaces” Nov. 15–16—a symposium featuring lectures by a distinguished group of scholars, offering new insights into one of the most celebrated American artists of the 20th century. Additional exhibition related programming can be found at VMFA.museum.

The accompanying 200-page, fully illustrated exhibition catalogue is the first publication to show that the artist and his contemporaries found artistic inspiration and culturally revealing metaphors in the American hotel and related rental lodgings. The catalogue contains critical essays on hotel, motel and allied subject matter in Hopper’s work. In addition to Mazow’s introduction and two essays, the catalogue includes essays by contributing authors Sarah G. Powers, Jason Weems, Carmenita Higginbotham, David Brody, Erika Doss and Kirsten M. Jensen. The hardcover catalogue can be ordered online (VMFA.museum/shop) or by contacting the VMFA shop at 804.340.1525.

After the Richmond show, the exhibition will travel to the Indianapolis Museum of Art at Newfields, Indianapolis.