PICK: "Visions of Her" Gallery Opening at The Broad, Thursday, July 25 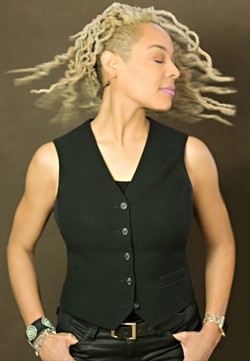 A new group exhibition titled "Visions of Her" will be on display at The Broad starting this Thursday, July 25 with a grand opening from 6 to 8 p.m.

"Visions of Her" is a collection of artwork from six artists who capture the unique faces and figures of women in their own style. The Broad is a workspace and social club for women and gender minorities, according to its website.

"As part of the exhibit, I am showing three pieces from my IdentityRVA project," notes photographer Kim Brundage in an email.

Her website describes IdentityRVA as "a photography and video exhibit that focuses on the humanity in each of us as our fellow human beings. Through it, we are seeking to raise awareness and explore issues around how we are all more alike than we might think despite some of our differences."

Brundage explained that "I created IdentityRVA in addition to my work as a professional branding and executive headshot photographer because I was concerned about the angry rhetoric and actions coming out of the 2016 political elections. I wanted to encourage conversations about inclusion, acceptance, and appreciation for one's self and for others."

She also said that she was grateful to The Broad and Sander Design & Art Consulting for inviting her to participate in this exhibit, as well as Crossroads Art Center for allowing her to premiere IdentityRVA, and the downtown Richmond Public Library, which will host her exhibit next year.