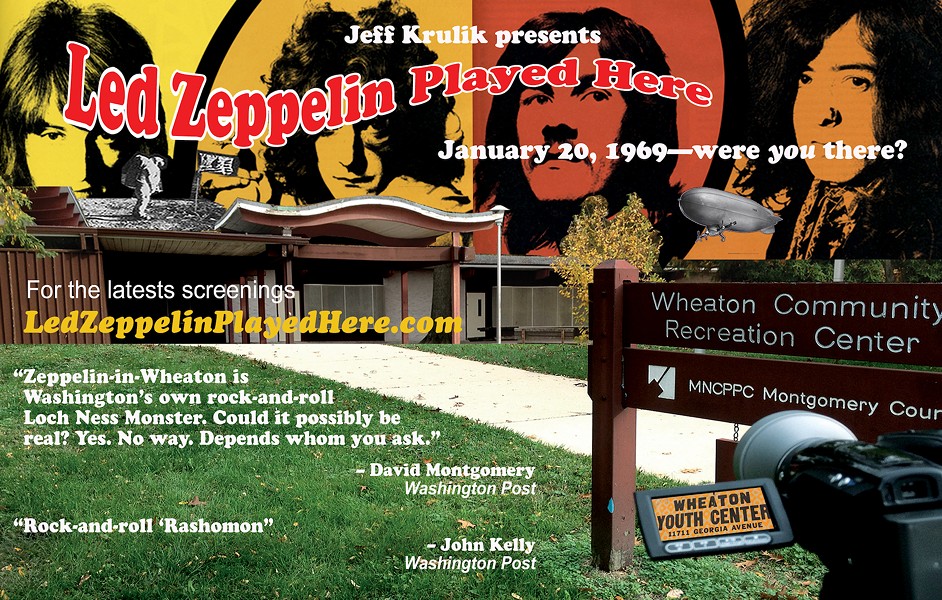 Cult film director Jeff Krulik, known for the legendary short, "Heavy Metal Parking Lot," will be returning to Richmond on Friday, July 26 for a screening of his latest work, the documentary "Led Zeppelin Played Here." The evening is being presented by the James River Film Society.

Called a "Rock-and-roll Roshoman" by the Washington Post, the film examines the urban legend that rock greats Led Zeppelin once performed to 50 teenagers at the Wheaton Youth Center on Georgia Avenue in Wheaton, Maryland, on Jan. 20, 1969 during the first presidential inauguration of Richard Milhous Nixon.

The movie, which has been on the film fest circuit for years now, features interviews with music critics, musicians and fans who claim to have been there on that fateful night. Here's a trailer of sorts.

And here's more about the project from an interview Krulik did with WAMU that can be read in full here:

My original intent was to honor the Laurel Pop Festival, which was the unheralded, somewhat forgotten festival one month before Woodstock. Clearly if you went to it, you remembered it, but anyone who didn’t go to it didn’t realize it was going on. I’d wanted to do a documentary about that, but tracing the arc of Led Zeppelin allowed for a different kind of story because they had such a meteoric rise that year. And if you realize that maybe they played their first local gig at this modest youth center, in a gymnasium, it was pretty incredible. Not out of the realm of possibility, because a lot of those bands had humble starts — this was a place that other bands were playing.

It’s like I said in the movie — it started out to be a nostalgia trip, and now it’s become a mystery. And I didn’t do it because I’m a Led Zeppelin fan. I’m very interested in the cultural and music industry in this area and concertgoing and the concert scene and people who carved out the concert business from nothing.

Tickets are $7 at the door and there will be a cash bar available.

Michael Jones of the James River Film Society says that the organization has until the end of the month to clear out its studio space at Visual Arts Center, where its resided for around 22 years. It is currently looking for a new home for its films, projection equipment, archives and posters.