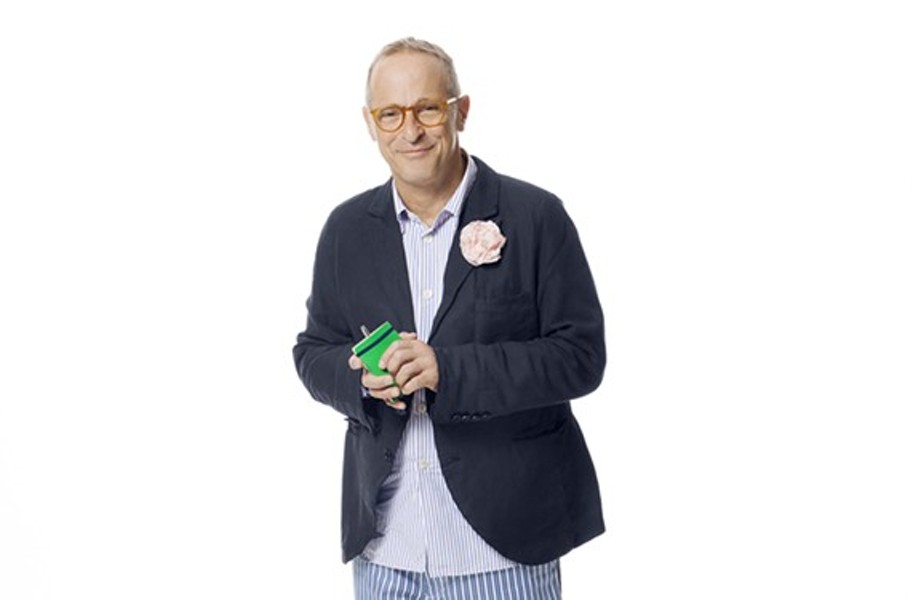 Humorist and author David Sedaris made space on his international tour to loop through Virginia on Wednesday, and for one night graced Richmond’s Carpenter Theatre, which was packed with adoring fans.

Renowned for a career of memorable essays and stories featuring his razor-sharp observations, quirky wit, and dry sense of humor, Sedaris fulfilled the crowd's expectations and then some, for nearly two hours.

Dressed in a black outfit that made him look like a ninja bagpiper who had been clawed by a wild animal, Sedaris began the evening in good spirits, gloating that he had just been inducted into the Academy of Arts and Letters, which requires someone to die first.

“Philip Roth died,” he told the audience in a high, slightly cartoonish voice that sounds exactly like his sister, Amy: “Boo-hoo!”

He then read from a few of his tongue-in-cheek New Yorker essays, covering all of the anticipated themes of family, fashion and oddly named beach houses in Emerald Isle, North Carolina. If you didn't know, his is called “The Sea Section,” although he’s thinking about buying a neighboring house and naming it “Canker Shores” or “The Amniotic Shack." He and his sister want to perform abortions at sea, he said, in a boat called Roe V. Wave, with a bait shop on the side. That one delivered waves of shocked laughter.

Noting that he had a new gig on CBS Sunday Morning, he hit on current events, cracking on the Gov. Ralph Northam blackface incident in a bit where he explored the future of political correctness and his distaste, as a gay man, for the LGBTQQIA formula. (“Seriously? … If you are Q [questioning] why don’t you just figure it out first, then you’ll have seven other initials to choose from”). Sedaris noted that all of our words today will one day be out of fashion: “All that will be left are those damn photos!”

He also lightheartedly described the chores of caring for his 95-year-old father in a story that involved a grandfather clock (named Father Time) falling on top of his father and giving him a bloody ear. He said he didn't want his father to die until Trump had been impeached.

“Just my luck he’ll die, and the next day, Trump will go down,” he joked.

There were the oddly common encounters that occur in the life of David Sedaris – famous rich guy – like the time he got confused for comedian Dave Chapelle at his father’s nursing home. He went ahead and played along, taking photos. Or when he was invited to Buckingham Palace because he cleaned up so much street trash from his hamlet in Essex, England, where he spends much of the year. “I was right there, a few feet from the Queen ... but I didn’t feel anything,” he noted, sounding disappointed.

It was a delightful night of storytelling that never dragged, honed through years of radio experience. Sedaris brought his uncommon ability to flow through stories naturally, popping in a plethora of unexpected quips with perfect timing. Just like in his books, Sedaris managed to turn even the most mundane stories into lavish works of comedic entertainment.

His relationship with vests, for instance, had the audience in stitches as he recounted his many attempts to wear them unironically – leading to him being compared to Stuart Little, Woody Allen, or a watch repairman (his sister's comment). In England, a vest got him called a "wanker," which sent him into a nostalgic reverie about being called a “teeny bopper” as a child.

“My life has been one long journey from teeny bopper to wanker, with a brief stop at Maude,” he said, describing how his partner Hugh once said a vest made him look like a famous female TV character. “No 61-year-old man wants to be told he looks like Bea Arthur."

Some stories occasionally showed his age. For example, while reflecting on modern day teens and their addiction to smartphones and gaming devices, he quipped, “I don’t remember my parents crying, ‘You and that goddamn transistor radio!’”

After a handful of wildly well-received stories, Sedaris closed with more recently composed short narratives (the David Sedaris version of one-liners) that make-up his daily journal entries. It was a great way to go out, with the crowd roaring at the bizarre moments that fill his daily life and his interactions with fans. Note: He likes the weirder moments, such as the guy who recently told him about his mental illness: "Yep, that keeps me preeetty busy." You have to hear Sedaris say it to get the full effect.

With a few minutes left, a brief Q&A offered the cherry on top, with Sedaris including a handful of bonus anecdotes, candid punchlines, a book suggestion, his real opinion on Donald Trump (“probably the same as 90 percent of the audience”) and where he ate lunch in Richmond: Salt and Forge, for the record. He also mentioned that he stayed at The Greenbrier Resort lately and loved it – that it seemed like a wonderful place for children.

This man, who has been called a modern-day Mark Twain, clearly can do no wrong with his Richmond audience: He even collected a round of applause after announcing his Fitbit step count for the day.

Hopefully, he'll be back sooner next time.

With additional commentary by Brent Baldwin