Ashley Diaz Mejias and Tiffany Jana hosted a popular workshop based on their book "Erasing Institutional Bias" at South by Southwest in Austin, Texas this week.

Richmond has its share of rising artists at South by Southwest in Austin, Texas this week, from musicians such as the Spacebomb crew and singer and songwriter Angelica Garcia, to filmmakers (indie auteur Rick Alverson showed his latest, "The Mountain" starring Jeff Goldblum) as well as authors.

We couldn't be there, but Style Weekly received a brief, e-mailed account of the week from Tiffany Jana and Ashley Diaz Mejias, authors of "Erasing Institutional Bias: How to Create Systemic Change for Organizational Inclusion" which was released last October by Penguin Random House.

The pair gave a SXSW workshop focusing on identifying and addressing systemic and institutional bias that often results from unconscious biases to which we are all vulnerable. Their workshop filled up two weeks before the internationally known festival started (its been running from March 8 to this Sunday, March 17).

Here's what they had to say about the experience:

How was the crowd?

Diaz Mejias: We didn’t get a head count but it was a good crowd.

What was it like working with the SXSW crowd?

Diaz Mejias: They were highly engaged and very aware of their unique needs regarding the subject matter. It was awesome hearing from leaders at well-known tech companies and people from as far away as Australia and South Africa.

Did they provide insights you didn't expect?

Tiffany Jana: There were so many international perspectives and different industry perspectives that it made for a rich session. We believe strongly in the wisdom of the crowd, and they really brought powerful case studies into the room.

How was the book being received throughout the event as well as by people in your workshop?

Diaz Mejias: They sold a bunch of our books this week [at the festival bookstore] before our session, but folks from the session bought books as well!

Have you had a chance to go to anything else featuring Richmonders?

Jana: I visited the Capital One House and attended Andreas Addison’s session. I also went to the Spacebomb Records concert last night. Everything was outstanding! 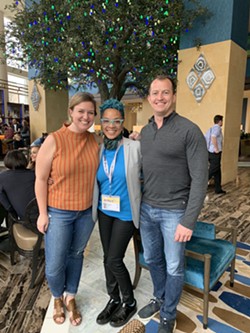 With an eye to the diversity and inclusion experience, how would you compare Austin to Richmond?

Jana: SXSW is pretty diverse in the global sense, but the crowds aren’t really reflective of Austin. Austin has attracted diverse talent and great companies, but like the conference, these represent a higher socioeconomic strata. There is a lot of visible homelessness in Austin, juxtaposed to extreme wealth.

Any memorable moments from the workshop and the book signing?

Jana: A brilliant pediatric student drew the parallel between racism and alcoholism. She noted that the work of identifying and overcoming one’s own bias is like the work of battling addiction. It’s never cured. All you can do is work hard to manage the symptoms. And ignoring it doesn’t make you unbiased. It just makes you unaware.

You can see both authors next Wednesday, March 20, back in Richmond, when they take part in Local Author Night at the Barnes and Noble at Libbie Place, 5501 W. Broad St. The event, which runs from 6 to 8 p.m., is free and books will be available for purchase.