Sub Pop to Release Minor Poet's New EP on May 17

Watch a video of the first single, "Tropic of Cancer." 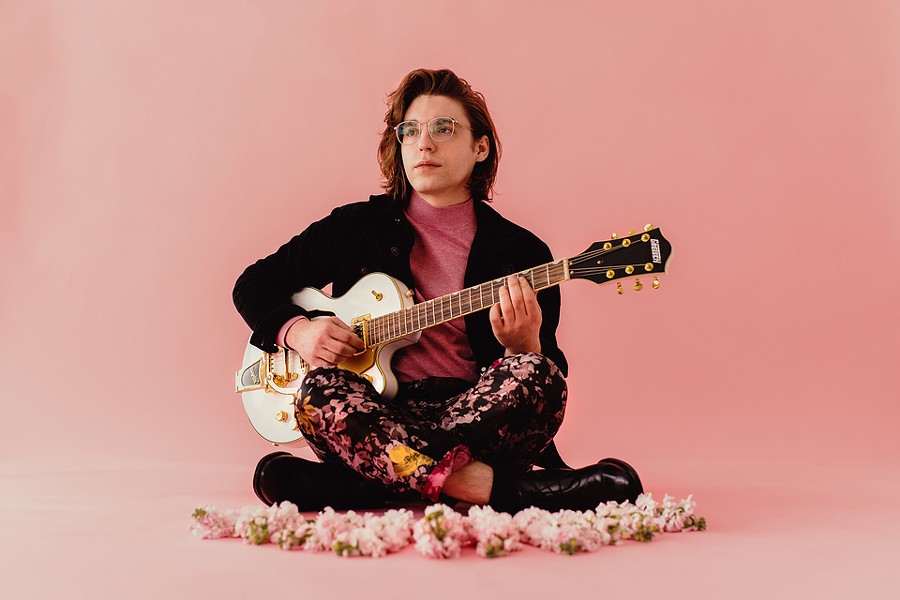 Joey Wharton Andrew Carter, the man behind Minor Poet, has good news about the distribution for his new album, "The Good News."

Minor Poet, the musical project of Andrew Carter, will release "The Good News" via Sub Pop on May 17. The Seattle-based label is partly owned by Warner Music Group and has strong distribution.

According to a press release from the label "the six-song collection, which features the ebullient lead single “Tropic of Cancer,” was produced by Andrew Carter and Adrian Olsen (Natalie Prass, Foxygen) at Montrose Recording in Richmond."

Minor Poet will have an EP release party at the Broadberry on Saturday, May 18 with music at 8 p.m. Tickets are $10 in advance, $15 day of show, and $25 gets you the vinyl and a ticket.

The album is available for preorder through Sub Pop Mega Mart with limited Loser edition on clear with red and blue swirl vinyl (while supplies last).

Style Weekly wrote about Carter back in 2017 here.

Here's more info from the label:

About Minor Poet’s The Good News:

After spending years writing and recording music by himself in various bedrooms and basements, Andrew Carter hit his stride with the debut Minor Poet album, And How!. Made on a creative whim with no outside expectations, the eleven-song collection combined Carter’s love of carefully-crafted pop with a loose, fun, off-the-cuff recording aesthetic. The album was released in 2017 and developed a small but loving fan base, and Minor Poet has grown from a passion project into a cross-country touring band with write-ups in publications such as American Songwriter, Magnet, The Wild Honey Pie, Impose, and more.

Minor Poet’s second album, The Good News, is a six-song collection that expands the boundaries of what constitutes the band’s sound. In just twenty-two minutes, the songs take apart the standard formulas of guitar-based rock and infuse them with vibrance and energy. On opener “Tabula Rasa,” interlocking guitars and a Farfisa organ carry the song through until everything drops suddenly into a doo-wop section that wouldn’t be out of place on a 1950’s greatest hits compilation. Warped noise envelops a tropicalia-flavored Casio beat in “Tropic of Cancer” before a slick groove and sliding bass line lead into the chorus’ pure pop bliss of horns and vocal harmonies. “Museum District” begins with a drum intro reminiscent of an off-kilter “Be My Baby,” and “Bit Your Tongue/All Alone Now” features a midsection with a glam-rock guitar solo amidst trumpet fanfare. These are just a few of the infectious moments on an EP filled with many more.

The Good News was made over four days at Montrose Recording, in Minor Poet’s hometown of Richmond, Virginia. In the past, Carter played all the instruments and handled all the production, but he knew that he had to reach outside himself to do justice to these songs. “I couldn’t capture the sounds I heard in my head,” Carter explains. “I wanted something that was vast and expansive but that at the same time could hit you immediately in the gut.” Paying homage to the “wall of sound” techniques made famous by Brian Wilson and Phil Spector, Carter and co-producer Adrian Olsen (Natalie Prass, Foxygen) overdubbed layer after layer of Carter playing an array of guitars, pianos, organs, synths, and percussion, as well as singing all the harmonies. The members of Minor Poet’s touring band were brought in to perform the core rhythm section, and local musicians stopped by to add crucial flourishes, such as the harmonizing guitar riffs in “Reverse Medusa” and the saxophone solo that closes out “Nude Descending Staircase.”

At the center of everything is Carter’s voice, singing lyrics that seamlessly mix allusions to religion, mythology, art, and philosophy as he questions himself, his place in the world around him, what he owes to his relationships, and, in turn, what he needs to ask of others in order to stay healthy. “Tabula Rasa” is a concept that argues that humans are born blank slates, shaped through experience and environment. The last two years couldn’t have felt more applicable for Carter, who started out as a fresh face with little-to-no experience in the music industry and slowly grew into himself as a stage performer and bandleader through both good and bad times. During this period he began to come to terms with lifelong struggles, such as the depression that permeates “Tropic of Cancer” and the social anxiety that runs through “Museum District.” Rather than be one-dimensional, however, Carter dives deeper into himself and his motivations, such as in “Reverse Medusa” when he sings, “Hide my love in poetic half-truths/never was one to dwell on my issues.” Carter’s ability to balance emotional honesty with a tongue-in-cheek self-awareness adds to the richness and originality of the music. Short but memorable, catchy yet meaningful, The Good News is another promising step forward for Minor Poet.