Season tips off tonight at 7 p.m. at home against Gardner-Webb 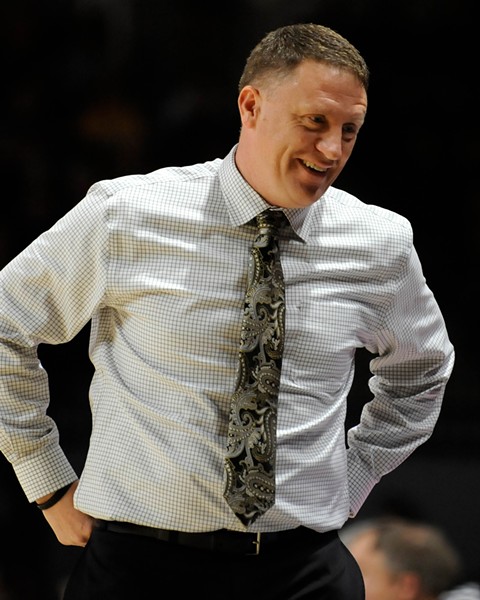 After crushing UVA-Wise by the score of 87-41 in a preseason exhibition game at the Siegel Center, on Oct. 30, Mike Rhoades knew better than to dwell too much on how pleased he was with his team's performance. After all, record-wise, VCU's men's head basketball coach knew it was a meaningless outing. So did the players. Nonetheless, entering his second campaign on West Broad Street, Coach Rhoades had to enjoy showing Rams fans that this team seems deeper than last season's 18-15 squad.

Rhoades' 2018-19 Rams don't have an established star player, as last year's team did with Justin Tillman, who was named to the all-Atlantic 10 first-team. Yet, at first glance, VCU appears to be blessed with a higher level of overall athleticism this year. That factor will be on display in the Rams regular season opener, on Nov. 6, when they host the Runnin' Bulldogs of Gardner-Webb from the Big South Conference (7 p.m., MASN).

Five returning players started the exhibition game: De'Riante Jenkins, 6-5; Sean Mobley, 6-8; Malik Crowfield 6-4; Marcus Santos-Silva, 6-7; Issac Vann, 6-6. In particular, Jenkins and Santos-Silva turned in solid performances. Running at point guard, Crowfield was steady. He will likely be counted on to fill in with that role until Marcus Evans, 6-2, fully recovers from surgeries on both Achilles tendons.

Evans sat out last year, having transferred from Rice, where he played for two seasons under Rhoades. Averaging 20.1 points per game, Evans was an all-Conference USA selection in both of those years before transferring to VCU. Asked when he will be ready to play, Rhoades said, “Sooner than later.”

Corey Douglas, 6-8, a transfer from Tallahassee CC, also played briefly for Rhoades at Rice, before receiving a medical redshirt from the NCAA. In 15 minutes on the floor Douglas scored 10 points, grabbed nine rebounds and blocked four shots.

Of the newcomers a second name pops off of the game's statistics sheet – KeShawn Curry, 6-4, who also came off the bench for 15 minutes. He scored 15 points, got four rebounds and made three steals. After the game, De'Riante Jenkins chuckled as he suggested that Curry's contributions were, “just a sneak peak.”

Rhoades has said he wants to use 10 or 11 players in his regular rotation. Look for both Douglas, a sophomore, and Curry, a freshman, to press the returning starters for minutes of playing time.

The coach expressed his hope that this team's depth will allow for a more aggressive defense, especially in the paint. “If you don't play 'D,'” Rhoades said, “the bench is an awesome teacher.”

In its 13-game schedule prior to commencing with 18 conference games, VCU will need its apparent upgrade in depth and athleticism in two noteworthy road games. They are Texas on Dec. 5 and (No. 5) Virginia on Dec. 9. On Dec. 22, the Rams will be visited by Wichita State. All three of those opponents are regular participants in the NCAA postseason championship tournament.

In the A-10's preseason media poll VCU was tapped as No. 7 in the conference, which is understandable for a team that lost 44 percent of its scoring and 46 percent of its rebounding from three players who graduated.

Prior to last season VCU went to seven straight NCAA postseason tournaments. The Rams have notched 18 consecutive seasons with winning records. But Coach Rhoades is well aware that his won/loss mark in his first season guiding the VCU program was the worst in that string. Speaking of records, when the Rams face the Runnin' Bulldogs VCU hopes to record its 118th straight sell-out.