Richmond in the Running for "Olympics of the Violin" in 2020 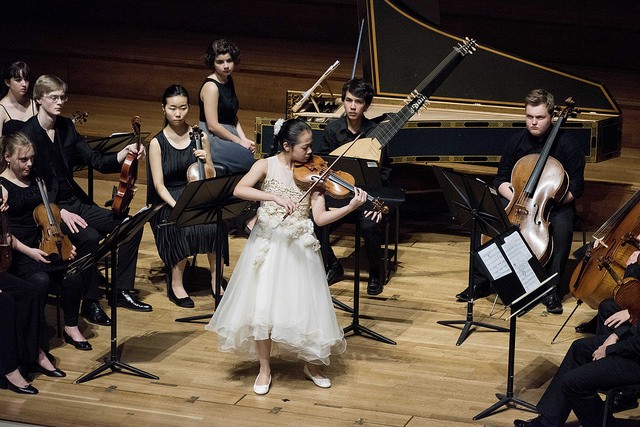 The Richmond Symphony, University of Richmond, Virginia Commonwealth University and WCVE-FM have joined the city is placing a bid to host the International Menuhin Competition – or ‘Olympics of the Violin’ in 2020.

The world's leading competition for young violinists is named after famed violinist and conductor, the late Yehudi Menuhin, and takes the form of a large festival that attracts the best violinists in the world under the age of 22, according to a press release from the Richmond Symphony.

"Richmond is currently in the running against Melbourne and London," says Scott Dodson, director of advancement and patron communications for the Richmond Symphony via e-mail. "While we are confident that we put together a very strong bid, we will know for certain when they announce the 2020 location in April of 2018 during the Menuhin Competition Finals in Geneva. There is a lot of work that will happen in the meantime."

Dodson explains that the biding process began last April when members of the Menuhin Trust attended a Richmond Symphony performance.

"They invited us into the application process at that time. In September, the Chairman of the Trust’s Board, Duncan Greenland and Artistic Director Gordon Back spent a week in Richmond performing site visits and meeting with Mayor Stoney, as well as leaders from University of Richmond, VCU, Community Ideas Station and the Symphony in preparation to a formal application."

The only other North American host for the event in the past has been Austin, Texas in 2014.

Here's more from a press release:

Gala concerts are held to open and close the festival and the finalists compete by performing concertos with the Richmond Symphony. Competitors are judged by a jury of some of the world’s most celebrated musicians, who also perform their own recitals and chamber concerts throughout the host City during the event.

Past competition hosts have included: Oslo, Norway (2010); Beijing, China (2012); Austin, Texas (the only other North American host, in 2014); London, England (2016); and Geneva, Switzerland (upcoming: April, 2018). During the 2016 Competition in London, over 300 young violinists from over 40 countries applied to participate, leading to the 44 best competitors being accepted from 17 countries.

Richmond, Virginia is understood to be the only North American venue still being considered by the Menuhin Competition as host city for 2020: Melbourne, Australia, and London, England are known to be under consideration by the Competition as potential alternatives.

The winning bid for host city will be announced from the stage during the upcoming competition’s finals in April 2018 in Geneva, Switzerland. If awarded, the competition will be broadcast world-wide through international streaming, with components recorded for broadcast by the Community Idea Stations potentially for regional, national and international audiences. Leading up to the 2020 Competition, partners will work with local companies, individuals and foundations to secure the significant resources needed to host the Competition.

Richmond audiences already received a taste of the event when London’s 2016 Junior Competition 1st Prize Winner, Yesong Sophie Lee, performed with Joshua Bell as part of the opening of the Richmond Symphony’s 2017-18 season.

“As Governor and First Lady of the Commonwealth of Virginia, it is our pleasure to offer Virginia’s support of the partnership bid by the University of Richmond, Richmond Symphony and Virginia Commonwealth University to host the 2020 Menuhin Competition in Richmond, our capital city,” say Governor Terence R. McAuliffe and First Lady Dorothy S. McAuliffe in a joint message. “The Menuhin Competition is an incredible opportunity for Virginia’s musical community to grow and connect with the best of the world’s musical talent. Competitors and visitors will experience nothing but the very best of what our capital city has to offer.”

“On behalf of the City of Richmond, I want to express our enthusiasm in supporting the University of Richmond, Richmond Symphony and Virginia Commonwealth University’s bid to host the 2020 Menuhin Competition in Richmond. Our city would be honored to offer its hospitality to you,” says Mayor Levar M. Stoney, in the letter the City of Richmond submitted as part of the bid document. “The Menuhin Competition will provide an opportunity for creative synergies in Richmond’s music community. Furthermore, it will strengthen the international profile of the University of Richmond and Virginia Commonwealth University for young musicians and provide an opportunity for Richmond’s public school students to experience quality violin masterclasses.”

If awarded, city-wide competition events will take place at the University of Richmond, VCU and the Dominion Arts Center in spring 2020. For more information about the competition visit http://menuhincompetition.org/home