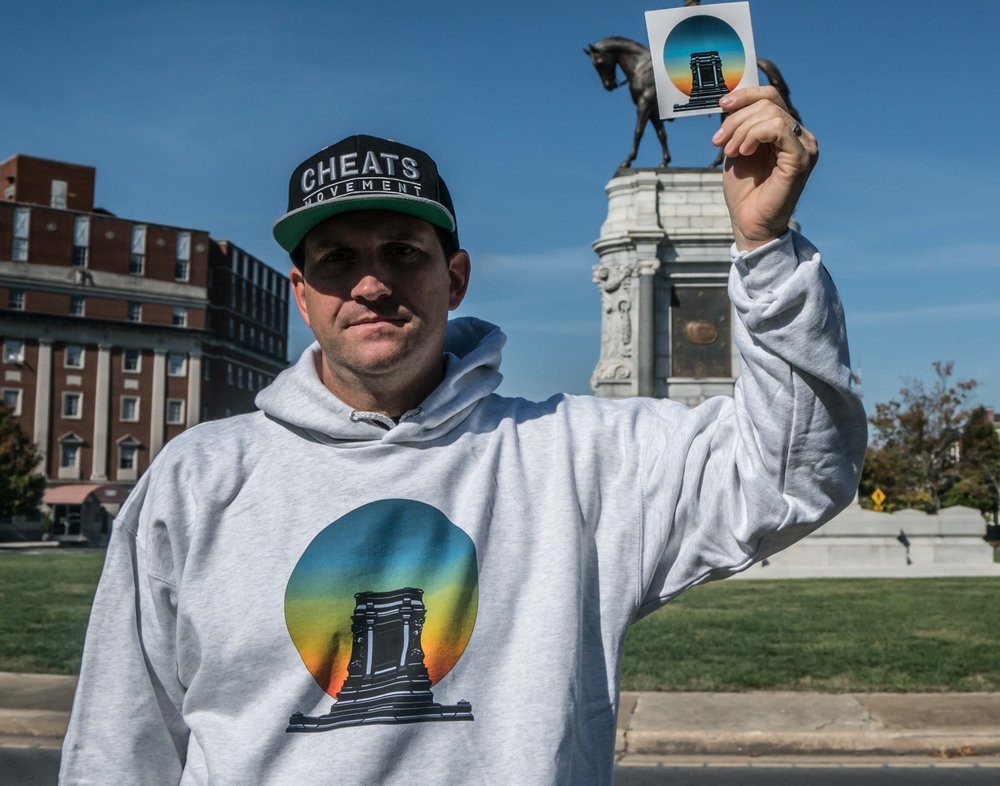 Visions of the future are everywhere these days.

Case in point: One of the most vocal proponents of local hip-hop culture, popular blogger Marc Cheatham of the Cheats Movement, has teamed with award-winning local artist Noah Scalin for a new hoodie design they hope will spark conversation.

The New Legacy Hoodie, available for $45 here, features an image of the Lee monument pedestal, minus the Confederate commander and his horse, with a rainbow background.

According to the website, the collaborators hope that "these hoodies will spark artistic dialogue about what the future can be on Monument Avenue." They were printed locally by Triple Stamp press and organizers note that "not only will [it] be your favorite hoodie, but it will send a strong message of activism."

Cheatham tells Style that the design started with Scalin, after he appeared on a former Cheats Movement podcast to discuss the monument issue the week that Mayor Levar Stoney's Monument Commission was announced.

"We had pretty intense talks. I think it's a great, artistic design that is right up the alley of what we believe in," says Cheatham. "Noah and I are both fathers, and collectively what we're seeing around the debate, it's so polarizing, a lot of good people won't feel comfortable showing activism on the front lines. So what's another effective way to show activism? [The design] is thought-provoking."

Scalin says he was inspired to create the image after seeing the empty Confederate pedestal in New Orleans.

"I wanted to make an image that normalized the idea of a Richmond without the monuments. I feel like many people are afraid of change, but they can embrace it better if they can see what it might look like," he explains. "For me, the colors of the background has two meanings: it's the sun setting on the old Richmond and its veneration of the Confederacy as well as a representation of the diversity and inclusion of the new Richmond that's being built right now."

Cheatham notes that the image is more symbolic and not exactly how they envision the future of the Lee Monument. He's more for the monuments being relocated to museums or battlegrounds, he says, where descendants can visit them.

The first limited run of 40 hoodies sold out, and Cheatham says the second run of 50 is about halfway sold. He imagines there will eventually be around 150-200 of them on the streets. Cheatham adds that without promotion, the pair is receiving orders from all over the country, from the Midwest to California. The image is also available on stickers at World of Mirth in Carytown.

"I'm convinced the monuments are gonna go," Cheatham says. "The only question is when -- and what event is going to cause that?"

Part of the profits for the hoodies will be donated to the Richmond Peace Education Center. For more info you can email Cheatham at thecheatsmovement@gmail.com.