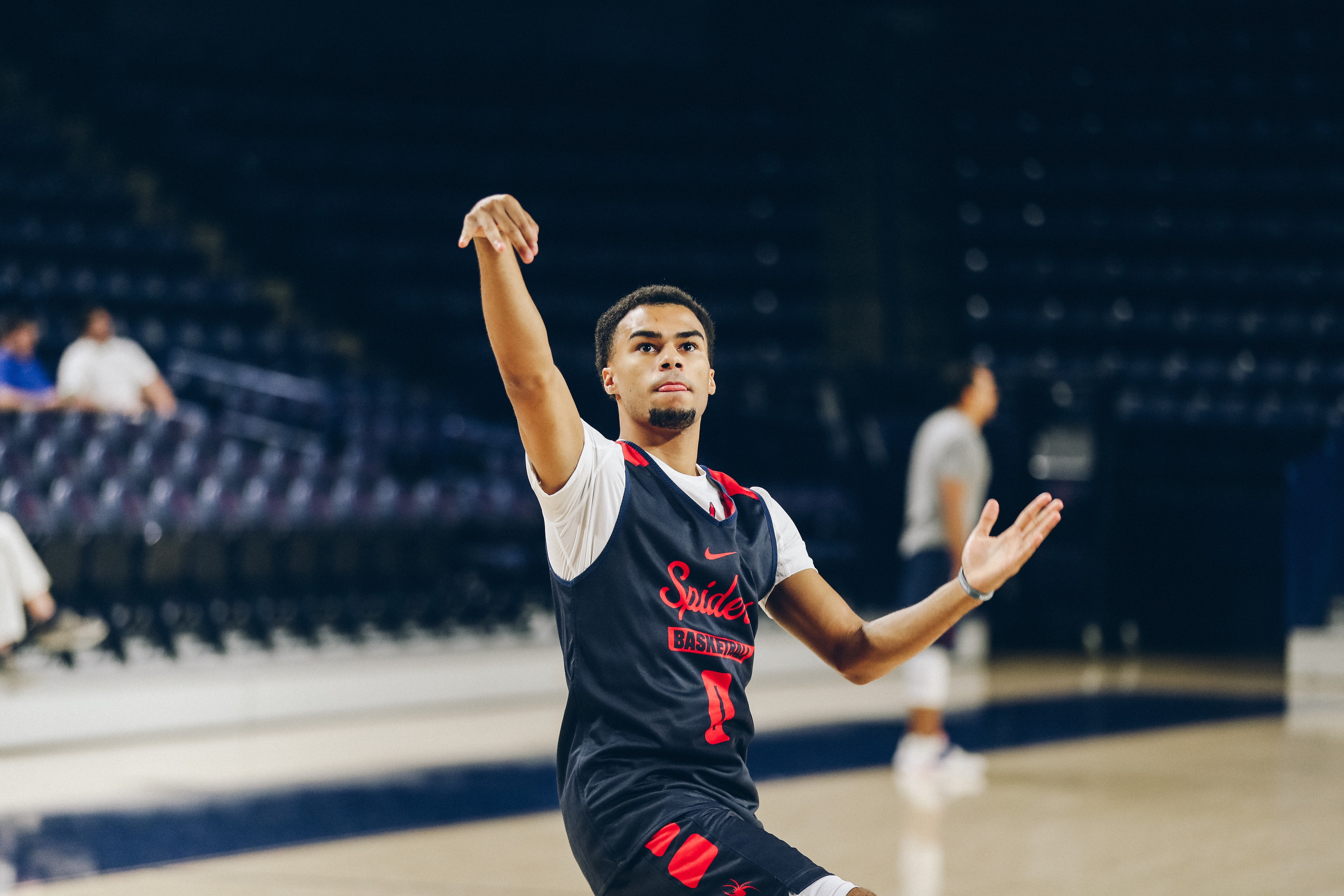 The big question going into this season for the Richmond Spiders is how to make up for the departure of two great senior leaders, point guard ShawnDre Jones and power forward and center T.J. Cline, who both signed to play pro ball in Europe.

Last season the Spiders started wobbly out of the gate, losing some games that would cost them come tournament-selection time. But they finished strong at third place in the Atlantic 10 with some solid performances against top-tier teams.

Already this year before tip-off they’re facing some adversity after a stress reaction (precursor to a break) was revealed in the left tibia of explosive point guard Khwan Fore. The junior leader will likely miss at least the first two games but could be back in time for a Nov. 20 game in the Cayman Islands against the University of Alabama at Birmingham, according to the team. Fore is being monitored now twice a week for improvement.

This season the Spiders will rely heavily on two local products, tough and athletic forward De’Monte Buckingham (Henrico High), who was the A-10 rookie of the year last season, and sharpshooting guard Nick Sherod (St. Christopher’s).

“The way we play we really move the ball a lot, we wouldn’t call a play for a guy’s number. But Buckingham and Sherod can score,” he says. “I think they have a good feel for how to do that. I think we’d probably have something where the ball has a great chance to end up in their hands.”

The Spiders are known for their matchup defense, but look for Mooney to continue the experimentation with switching defenses he started last season. “We had strictly played the matchup for such a long time and introduced man-to-man last year and it was really good for us,” he says. “I think we’ll play both and find one that’s stronger. But the nature of switching defenses could be beneficial.”

Rebounding is always a problem for the undersized Spiders, but Mooney doesn’t sound overly concerned, noting that Golden has improved physically, as well as in his fluidity and mobility, and he expects him to be “a really good player.”

“We’ve always had a commitment to not give up transition baskets, so we haven’t been a good offensive rebounding team,” Mooney admits. “But De’Monte and Nick and Grant have a good nose for the ball. I feel like we’ll have some guys who will be good at hunting [rebounds].”

Longtime fans of the pesky Spiders – who last made the NCAA tournament in 2011, advancing to the Sweet 16 – should be excited to get a first look at many new faces on the team. There’s Jordan Madrid-Andrews, a 6-foot-8-inch graduate transfer who played one season with Chicago State and is expected to help on the boards. Plus numerous freshmen including 6-foot-8-inch forward, Phoenix “A.J.” Ford, 6-foot-6-inch rebounding guard Nathan Cayo, and 6-foot-7-inch Tomas Verbinskis, a three-star recruit from Lithuania known for his shooting.

But the first extended glimpse will be of Gilyard running the point, and Mooney seems high on the Kansas City, Missouri, native who once scored 50 points in a high school game. “I’ve been surprised by Gilyard, he really has a chance. A little small but a great defender, really quick and can score in a lot of ways,” Mooney says. “I’m surprised how far along he is for someone his age.”

Things may take awhile to gel for these relatively inexperienced collegiate players, but they have a strong foundation moving forward. Add Mooney’s steady concept of team basketball and loading up with shooters and smaller guards with oversized hearts, and the Spiders always seem to provide thrills and close games.

They will have Georgetown, with new Coach Patrick Ewing, heading into the Robins Center later this month.

The Richmond Spiders play Delaware this Friday, Nov. 10 at the Robins Center at 7 p.m.