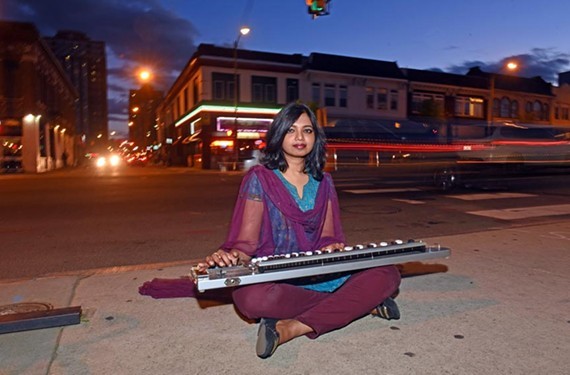 Sarmistha Talukdar, the visual and sound artist who also works as a local scientist (we featured her on the cover of our last annual music issue) has a new video out from her solo project Tavishi.

Recently, she let us know about her new project and video for "Cancer," which you can watch below.

I started collaborating with Mintzu Chen. Chen is an experimental artist, musician, and poet, who graduated from the same institute in which I am currently working, Virginia Commonwealth University. We found that we both share a passion to use art/music to highlight social issues.

We present "Cancer" as an example of our collaborative efforts. In this video, the sound was generated from catalog of the somatic mutations of cancer via data sonification, and mixed with thought provoking excerpts. The morbidity associated with cancer was expressed by the medium of atonal noise, and visual noise.

"Cancer" was created to reflect on the scientific and social aspect of the disease itself. The sonic and visual elements in this very abstract video are symbolically linked to each other on multiple levels.The video was generated using time-lapse imaging of cancer proliferation, abstracted video, online news sources, and agriculture-based media.

Additionally, the color palette mirrors the colors observed in in vitro cancer cell culture. The growth, spread, and decay of capitalism is represented through petri-dish culture, and footage on big pharma scandals are positioned accordingly. We compiled a video narrative that depicts cancer cell proliferation, the pendulum of decay and growth, and controversies which involve capitalistic industries that benefit from cancer.

We hope that the video will leave the audience pondering on the reality of who really benefits off of the work of scientific researchers? Is it majority of the people or the 1%? What are the true motives of the industries involved?

Cancer from Mochelle Chen on Vimeo.