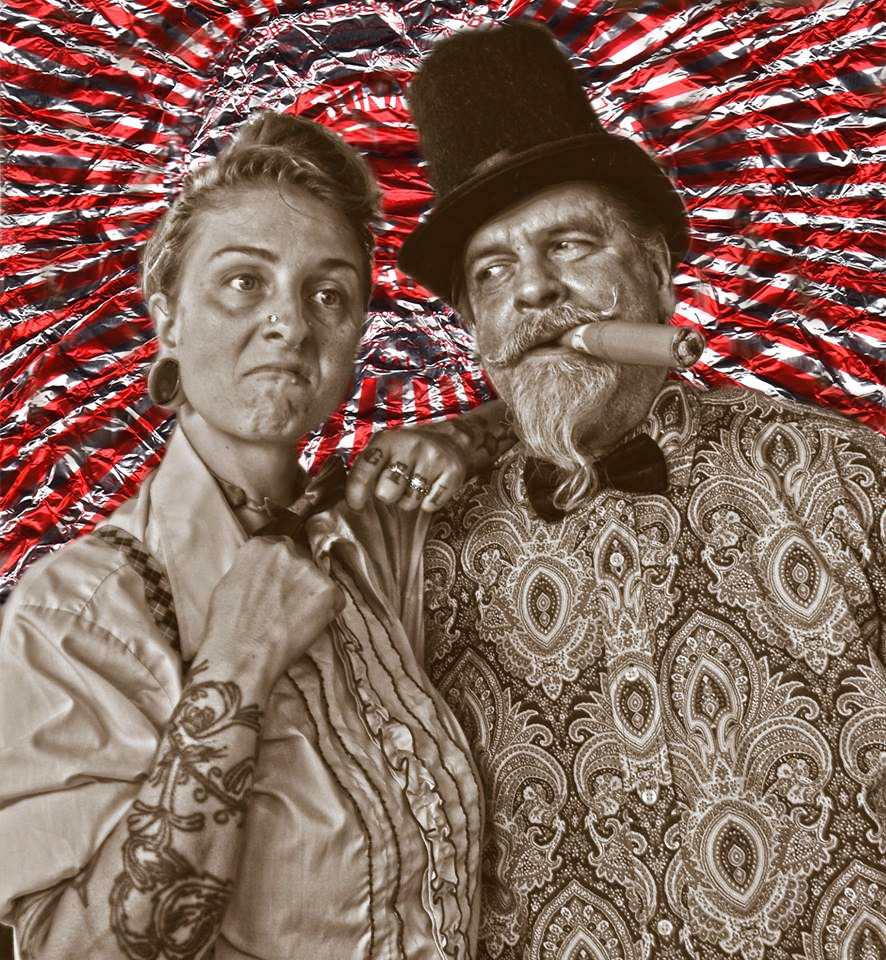 At 9 a.m., the band is still coalescing, but there is a healthy crowd at Crossroads Coffee and Ice Cream.

There are still a few good seats, if you don’t mind sitting with strangers. They won’t be strangers long, which is sort of the point. Breakfast Cabaret ringleader Barry Bless describes the South Side neighborhood as Richmond’s Left Bank. The atmosphere is friendly, multiethnic, and as gently leftist as a Bernie sticker on a Mac laptop.

With his accordion, waxed mustache and pointed beard, and a black top hat adorned with a red carnation, paisley shirt and black-on-black striped pants, Bless looks like he just stepped out of an Henri Toulouse-Lautrec poster. Singer and dancer Twila Sikorski is wearing a short, flowered dress, a layered, pleated pink apron with a cupcake motif and calf-high, brown cowboy boots. It is at once eclectic and down-home.

When the music kicks off into a rousing “Bella Ciao,” a 1940s anti-fascist, Italian partisan anthem, accompanied by violin, mandolin, bass and Cajun box drum, the evocation of an idealized bohemian cafe is complete. There is nothing else like it in Richmond.

On Friday, Sept. 22, the group celebrates its 100th performance. Coincidentally, it is also the 15th anniversary of Crossroads. That’s enough shows to be a local institution, albeit one that is more the result of quirky organic contingency than long-term planning.

“Twila and I have been working together on multiple projects for seven years,” Bless says. "We’re like an old married couple. We are both morning people, and both have children in school, so we rehearsed early in the day. Since that was when we were at the top of our game, we decided to move our rehearsals down to Crossroads.”

They started in September 2013 as a duo, Professor Bless and the Dancing Madwoman. There were no expectations, just shows once a month. Then twice. Then other players asked to join in and the audience grew. Ultimately, Crossroads owner Will Herring asked them to make it a weekly event.

“Over 30 performers have been part of the show,” Bless says. “Our motto is ‘Breakfast Cabaret, ruining the reputations of Richmond’s finest musicians.”

On this day, for 90 minutes on a perfect morning, the band capably navigates songs about love, about coffee and about trains. It will play a Kurt Weill song about the murderous fantasies of a waitress. There is a Russian song with a Led Zeppelin-like intro, and a surreal birthday song, originally performed by a cartoon crocodile, that Bless says has become the Russian equivalent of “Happy Birthday to You.”

The performance is interspersed with jokes, audience interaction, and intimate surprises, such as the news that the violinist has just learned she is pregnant. People come and go on the covered patio. A cheerfully racy song about going to a Chinese go-go is followed by Herring’s dramatic reading of an astoundingly bleak Yiddish tale about a death-haunted orphan selling small goods in a cold rain. Visible up the hill, at Patrick Henry School of Science and the Arts, children at recess play on sunlit swings.

It ends with a selection from the Cowgirl Suite, a long-gestating soundtrack for an imaginary black-and-white TV show “The Adventures of Twila Jane.” For a cowboy song, the melody has some sharp turns and a decidedly Eastern modality. But it’s pretty, and it explains, at long last, Sikorski’s pointed-toe, stitch-patterned boots.

It’s all charming, and with a steady audience and an ever-growing repertoire of more than a hundred songs, it is no surprise that the gig has prospered. But it is so laid back, it is hard to imagine how anyone kept count.

“I just count the posters,” Bless says. “I do one every week, while I am relaxing on Saturday night or Sunday afternoon. I try to include all the members, maybe the whole group, maybe just the rhythm section. A lot of artists stop by. Sometimes I use a sketch or photo from the audience.”

The continuum between performer and audience is essential to a place like Crossroads.

“Their product isn’t coffee,” Bless says, "it’s conversation. The coffee house tradition goes back centuries. There were plays, arguments, pamphleteers. It is a real community space, and it wouldn’t work unless somebody like Will was the proprietor. In a lot of coffee shops everyone is hiding behind their screens. At Crossroads, people look up.”

Bless has deep roots in the neighborhood. He’s lived in a house around the corner since he was 19 and raised a family here. Friday’s performances are not just a gig, but a calling.

“When I am [at Crossroads] I am doing what I am meant to be doing, at this place and time, in this particular community. Even when we are slam-packed, the audience isn’t a distraction. I want this to be something that people come to see when they come into town. See the river. Go to a movie at the Byrd Theatre, and come to the Breakfast Cabaret.”

It’s cheaper than a trip to Paris, and it is as close a re-creation of a idealized Rive Gauche Parisienne cafe as a Forest Hill coffee and ice cream shop is likely to come.

Which is, surprisingly, refreshingly close.