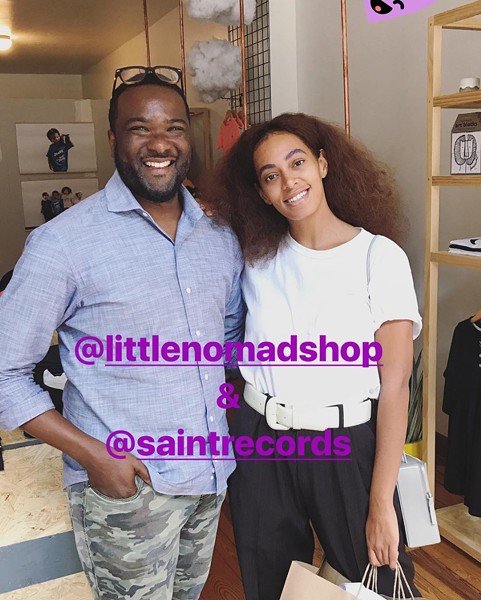 It had only been open since Saturday, which was designed to take advantage of foot traffic from the Maggie Walker statue unveiling.

He was busy but he noticed a couple customers come in, in particular one striking young woman.

“She was very pretty, but they were deep in conversation, so I just put my head back down,” he says. “When I looked back up, a guy had rushed in the store who knew right away who she was, he was star-struck.”

“That’s when I realized, 'Oh wow, Solange is in the store right now,'” Bryant says.

Knowles, a Grammy-winning artist and sister of global superstar and official living deity, Beyonce Knowles, had wandered into the clothing store with a relative in tow. Bryant didn't know who it was, but Knowles’ husband is a former Richmonder who still has family in the area. And she was staying at Quirk Hotel.

Bryant says Knowles was very graceful and took photos with the male fan, then she shopped for 45 minutes, buying clothing of all sizes, books and pens.

“We had a good conversation about Broad Street and Jackson Ward. She really wanted to know the history behind it,” Bryant says. “And she was curious about how we got started as a store.”

You can read more about Little Nomad in this story Style did when it was ramping up the project.

Bryant didn’t know why Knowles was in town, but assumed it was to visit family. He also wasn’t sure if she was buying kids' clothes for her famous sister's new twins who recently arrived.

“She didn’t say, but she did mention her son,” he recalls.

After she left the store, she visited Saadia's Juice Box. And Bryant says he gave her some tips for places to eat dinner and she chose Laura Lee's Restaurant.