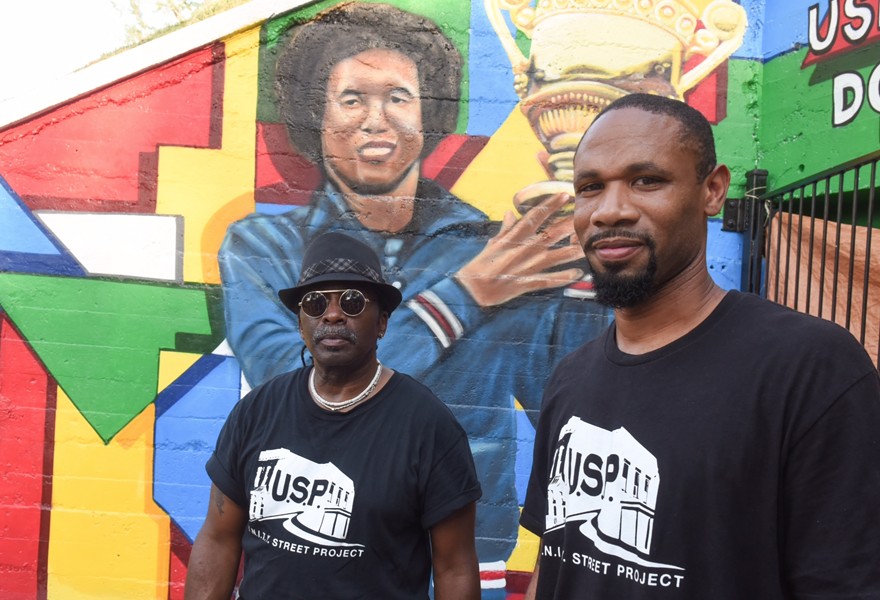 The U.N.I.T.Y Street Project — which stands for Upholding Networking Inspiring Togetherness in Celebration of Yesterday — continues to earn kudos by creating eye-catching neighborhood murals that celebrate history makers in Richmond.

Artists Sir James Thornhill and Hamilton Glass were on hand in Battery Park on a hot and humid Wednesday afternoon to unveil their latest project: a colorful tunnel mural featuring tennis great Arthur Ashe and a timeline of his life.

“We want to involve the communities,” says Glass. “Last year we did three projects in Jackson Ward. This is the first this year with maybe one or two more planned. … It’s really a grassroots thing. We don’t have a main base, we’re not supported by the city or by one corporation. We come together to make this happen. So community support is really appreciated.”

A large crowd, with many kids playing tennis, showed up for the unveiling on the occasion of Ashe’s 74th birthday, July 12. Members of Ashe's extended family were there, as well as dancers from Ezibu Muntu African Dance Company, and comments by former Governor Douglas Wilder were read.

The mural covers the 2,200-square-foot area inside and outside the tunnel that connects the basketball side to the tennis side beneath Overbrook Road. While Ashe learned to play on Brookfield Gardens tennis courts, he played in Battery Park on occasion, and his father worked for the Department of Recreation and Parks.

“This tunnel has been abandoned for a long time. Sometimes kids come here [and] they’re afraid to go across to go the bathroom,” Thornhill says, noting that the playground was recently refurbished with donated mulch. “So we decided to do a walkthrough timeline of his history. They’ll learn some things they never knew.”

Ashe's accomplishments are written inside the tunnel in a series of  short statements such as “Arthur Ashe graduated from Maggie L. Walker High School” and “Ashe won the Wimbledon finals, becoming the first African-American male to be ranked No. 1 in the world."

Glass says that with every project they do, the U.N.I.T.Y Street Project tries to highlight a historical figure.

“They’re not just for the community — the inspiration comes from the community,” he says. “We had corporate partners [such as Altria], but also asked the community to help fund it online.”

The group has a lots of projects it hopes to do in the future, Glass says, but funding is always an issue.

This article has been updated to reflect the correct name of the dance group that was in attendance. Style regrets the error.