And we have the exclusive photo. 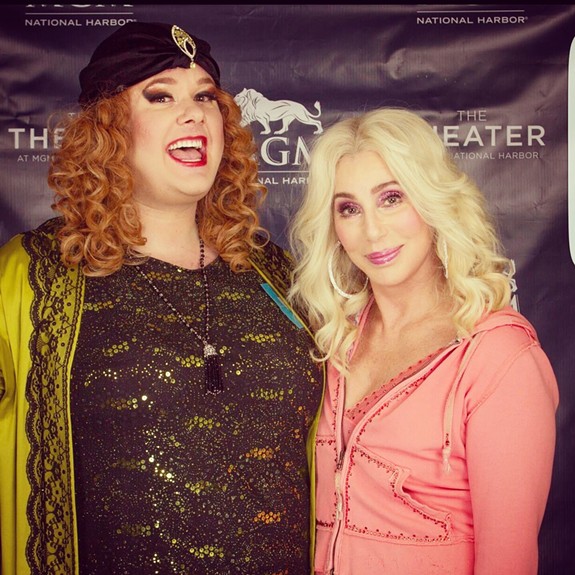 It was a Saturday that Magnolia Jackson Pickett Burnside won't forget.

The robust Richmond emcee and comedienne, known as one of the producers of local burlesque show The Revue, not only was going to see her beloved Cher perform for the fifth time -- but also was finally going to meet the diva in person.

The concert was March 25 in Maryland at the new MGM National Harbor, where Cher has been holding a residency when not working Las Vegas. It was Burnside's 32nd birthday last week, she says, so this was a present to herself.

Cher fandom runs in her family, she says.

"Cher was my first concert. When I was 13, my mother took me to see her on the Believe tour at the Virginia Beach Amphitheater," she recalls. "My grandparents are Cher fans, my mother is, my father's parents saw Sonny and Cher in concert ... it's in my blood."

But this time was different. In addition to her early ticket purchase of eighth row seats, Burnside spent extra money for a meet-and-greet opportunity afterward. "I debated for about 20 minutes. Then I thought: 'It's a once in a lifetime opportunity. It's only money, I'll just jack up my credit card. Who cares?'"

After what she calls an amazing concert -- which featured about 11 or 12 costume changes and "Cher riding out on a giant animatronic elephant while singing" --- Richmond's legendary emcee started getting nervous.

Burnside had come fully prepared, dressed in her outfit based on "Auntie Mame," Cher's favorite film and one she'd hoped to remake. "My name comes from 'Mame,'" Burnside explains. "The main character marries a guy named Beauregard Jackson Pickett Burnside. So my outfit I wore was modeled after an outfit that Rosalind Russell wore in the movie."

Burnside, along with about 30 other people, was now backstage.

"I figured after the show I would look busted as hell with all the sweating," she says. Also she worried, as anyone might, that her celebrity crush would disappoint her.

Burnside recalls what happened next with the fine-detailed clarity of a religious experience:

"I stepped into the doorframe. I looked at Cher, she looked at me -- even though she was still taking a picture with somebody else -- and she just kinda smirked and tilted her head.

That's the image that's set into my head, that I amused her [laughs].

Then it was an absolute whirlwind. I went up and held both her hands, told her I was Magnolia Jackson Pickett Burnside. She literally cackled and tossed her hair back like Cher does. She was very amused.

We took the photo and she said my last name again. I said, "You really have to do the remake of 'Auntie Mame.'" And she said, "I'm just too old" and giggled. Then I said, "No! Never!" and just walked out.

Burnside says the best part about the whole thing was that Cher was so warm, kind and human -- that she more than delivered. "It was like I was seeing an old friend," she recalls.

Before finishing her story, Burnside says she also ran into Cher's good friend, Paulette, backstage, who often handles social media duties for the celebrity. Burnside says that Paulette once responded to her on Instagram regarding a strange request.

"I told her I'm that crazy drag queen who has the reoccurring dream about finding Cher's wig closet," she says. "And she just laughed and said she remembered."

After the whirlwind encounter was finally over, Burnside says she went outside and cried for 20 minutes.

"I was in absolute ecstasy," she says.