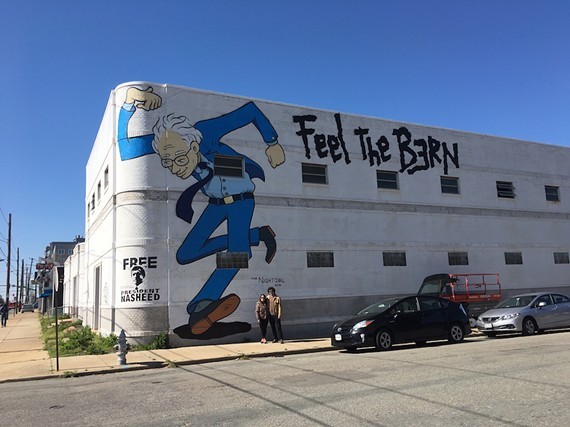 Renovations are starting on the old Sea Dream Leather building, or the Bernie Building as people now call it -- located at 3300 W. Broad St.

Co-owner David Morrison says that he and partner Robert Olson have found the building an ideal base of operation with plenty of space to offer. So they've created the concept of the Highpoint, a place where creative professionals can maintain a space and grow within the city.

But will the famous Bernie Sanders mural painted almost a year ago by local artist Mickael Broth remain?

"Funny you should ask. Yes, but it will likely need to be repainted as there is going to be a bit of repointing and brick repair -- but Bernie stays," says Morrison. "From the rendering that was done way before the mural it doesn't look like it, but there are still a lot of people that love it and it has sort of become part of our identity and there is a certain anti-establishment kinship. I kind of feel like it is as relevant now as it was when we put it up."

As noted in a press release, the Highpoint is an 18,000-square-foot Art Moderne structure "that has been designed with a variety of spaces to fit the needs of creative professionals ranging from artists to architectural firms. With the help of 510 Architects and DCP Construction Partners, owners Robert Olson and David Morrison are working to complete construction for full opening the fall of 2017."