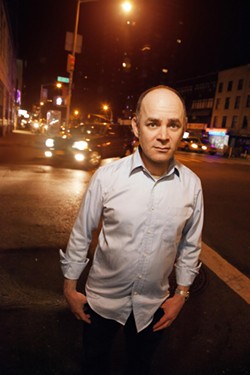 Veteran New York comedian Todd Barry has an entertaining new book about to come out, an occasionally snort-worthy diary of sorts, “Thank You for Coming to Hattiesburg: One Comedian’s Tour of Not-Quite-the-Biggest Cities in the World.”

Known for his dry, chafing sense of humor and near-perfect timing, Barry documents his 2015 stand-up tour performing before small but enthusiastic crowds in mostly secondary markets: Bs and Cs, maybe a few Ds.

On page 61 you’ll find his chapter on Richmond, which is centered on a memorable show he performed at Gallery5 in Jackson Ward.

Barry sticks to the gritty details, noting that he was performing at a “cool little space” and staying at the nearby Richmond Marriott, which has a sports bar that boasts the world’s largest television set (“I stole a glance at it,” he writes. “Extremely large television set!”).

He gets into Richmond the night before his show and wanders around a bit -- first trying to get into a burlesque show free at Gallery5, a standard showbiz courtesy for performers, he notes. But he quickly realizes that the door person, who works for the burlesque group, doesn’t know who he is.

Rather than raise a stink, he shuffles over to nearby Saison, which “has a great adult-hipster (as opposed to PBR hipster) gastropub vibe,” he writes. A noted music fan and former musician, Barry then takes a trip to GwarBar but leaves before getting a drink because it was too loud.

About Gwar, he thinks to himself:

“I saw them when we were both booked at the same festival in Austin. They were really good musicians and their show was nuts, but as a performer all I could think was, You go through all the trouble to tour, and you perform anonymously? Like you’re public and anonymous at the same time?”

The next day, Barry and a comedian friend take a hot tip and peruse the fine homes along Monument Avenue. He finds the houses beautiful and then Googles the area when he gets back to the hotel, realizing he could afford a place 10 times the size of his New York Apartment.

“If only I wanted to move to Richmond,” he writes, it would give him a good story for his next late-night talk show appearance.

“Neither, Jimmy Fallon. I actually have homes in Richmond and Asheville.”

“Really, you don’t even keep a crash pad in New York?”

“No, Jimmy, I took the money I would spend on rent and use it to pay off two mortgages.”

“Yes, Jimmy. And both houses are mansions.”

“Wow again. How do you get to your gigs?”

“Well Jimmy, I’ll tell you [lowers voice] but its got to be a secret . . . both cities have airports.”

If you were at the Gallery5 show, you know that Barry talked more about Monument Avenue, and also dealt with a heckler who had to be kicked out of the building -- who gets brief mention as the “jerk” in the chapter. Barry has little patience for people who shout things at his shows. He does like it, however, when they yell, “You suck!” as they’re being escorted out.

After his set, he goes to meet up with his friend Hannibal Buress, a popular comedian playing a larger gig in Richmond that same evening.

Barry ends up leaving because, once again, the music was too loud.

The book will be released on March 14 and available at your book seller of choice, most likely. You can pre-order it here.

Story has been updated to correct spelling for the name, Hannibal Buress and another type-o.