Movie Review: "I Am Not Your Negro" 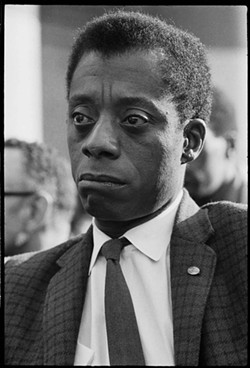 As a young writer in the late 1940s, James Baldwin left America, disgusted by racism and wanting to obliterate his own boundaries.

Settling in Paris, he returned home only after seeing a photo of a young African-American student being spit on and taunted as she entered a desegregated school in Charlotte, North Carolina.

“Everybody else was paying their dues and it was time I went home and paid mine,” his words echo at the beginning of the acclaimed documentary by Raoul Peck, “I Am Not Your Negro.” What follows is a solemn journey into the acerbic mind of a great American writer and cultural critic. The power of his insights make this one of the most engrossing documentaries of the year so far, even with a major oversight by the director.

Featuring masterful use of archival materials, the film is told entirely through Baldwin’s own, thought-provoking words -- from recorded speeches and television appearances to notes and letters voiced by actor Samuel L. Jackson. His gravitas melds seamlessly with Baldwin’s weary skepticism, almost as if the writer were speaking from the grave (he died in 1987).

But make no mistake: this is not a biographical sketch, or anything close to a full portrait of Baldwin, the man. Most noticeably, it omits hardly any mention of his gay identity – a startling oversight. What it does do well is tap into his passion for human connection that made him a great communicator.

In the late ‘70s, Baldwin was embarking on his final book manuscript (“Remember This House”) in which he planned to re-examine the lives of Martin Luther King Jr., Malcolm X and Medgar Evers – each of them not only assassinated, but also his friends – in hopes of having their legacies “bang against and reveal each other as they did in life,” he says.

The movie can feel scattershot at times, considering the juggling of excerpts and that Baldwin’s book was unfinished, but the words assembled here slowly take on a prophetic momentum. Through it all, the viewer is guided by Baldwin’s hard-earned insights on the psychological devastation wrought by America’s system of brutal racism. One gets the sense of a complex man who truly was ahead of his time, a former child preacher who recognized that the future of America is intertwined with the future of the black race in America.

Especially powerful is Peck’s interspersing of dramatic footage from modern riots in Ferguson, Missouri, with harrowing archival film from the heyday of civil rights struggles. What it reveals simultaneously is how much and little things have changed. Apart from the latest dramatic example on social media, most racism is far more insidious and class-based today – less in the open. As Baldwin writes, “The world is not white. ... White is a metaphor for power, and that is simply a way of describing Chase Manhattan Bank.”

It’s clear that Peck wants the film to celebrate and draw inspiration from Baldwin’s uncompromising approach to racial politics, and the movie’s most powerful moments come simply from clips of Baldwin himself, including a takedown of a Yale philosophy professor on the Dick Cavett show.

Baldwin doesn’t pretend to have all the answers, but he does maintain hope for a future where any and all oppressors will face their need to subjugate or dehumanize “the other” – a pain he felt doubly as a gay black man.

While the film will be an eye-opener for anyone who has never thought deeply on the subject, more than anything you may come away wishing Baldwin had finished that last book. It probably would have been a useful text for the decentralized, leaderless swell of social justice movements today. 4 stars.