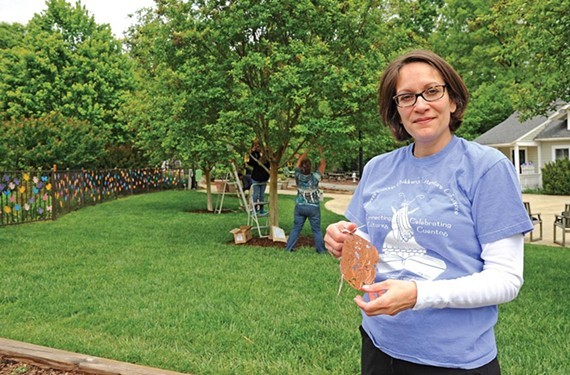 A few news items regarding the arts:

VCU's Institute for Contemporary Art held a big media shindig in New York this week, announcing an opening date of Oct. 28 and inaugural exhibition that will include a video game featuring "a trans woman with cyborg guts," reinterpreted KKK robes, and local teens reciting phrases from Argentine writer Jorge Luis Borges’ “The Garden of Forking Paths” (1941).

The $41-million, three-story Markel Center, home of the ICA at the corner of Belvidere and Broad, will kick things off with "Declaration," a show of established and emerging artists featuring painting, sculpture, multimedia works, site-specific installations and time-based performances.

Featuring new work by artists from around the globe, including Amos Paul Kennedy Jr., Marinella Senatore, Tania Bruguera and Paul Rucker, the exhibition will also include artists from Richmond’s vibrant arts community, such as VCU School of the Arts professor Stephen Vitiello and VCU alumnus Levester Williams. Examining themes of protest, social justice, connection and creative community, “Declaration” will remain on view through Feb. 25, 2018.

Legendary Richmond metal kings, Gwar [who will also be among the local artists included in the ICA show] announced that they are canceling the annual Gwar B-Q this summer at Hadad's Lake. Instead they're focusing on recording a new album and gearing up for tour. Expect a big return for the festival in 2018 and a whole new Gwar show that, as the press release reads, "will blow your minds faster and harder than a meth addicted hooker blows a paycheck."

Also, fans of local author Meg Medina will be interested to know that Hulu has bought a drama project based on her YA book, "Yaqui Delgado Wants to Kick Your Ass." We wrote about the book back in 2013, check it out.