Will be on display on second floor from Feb. 1 to March 6. 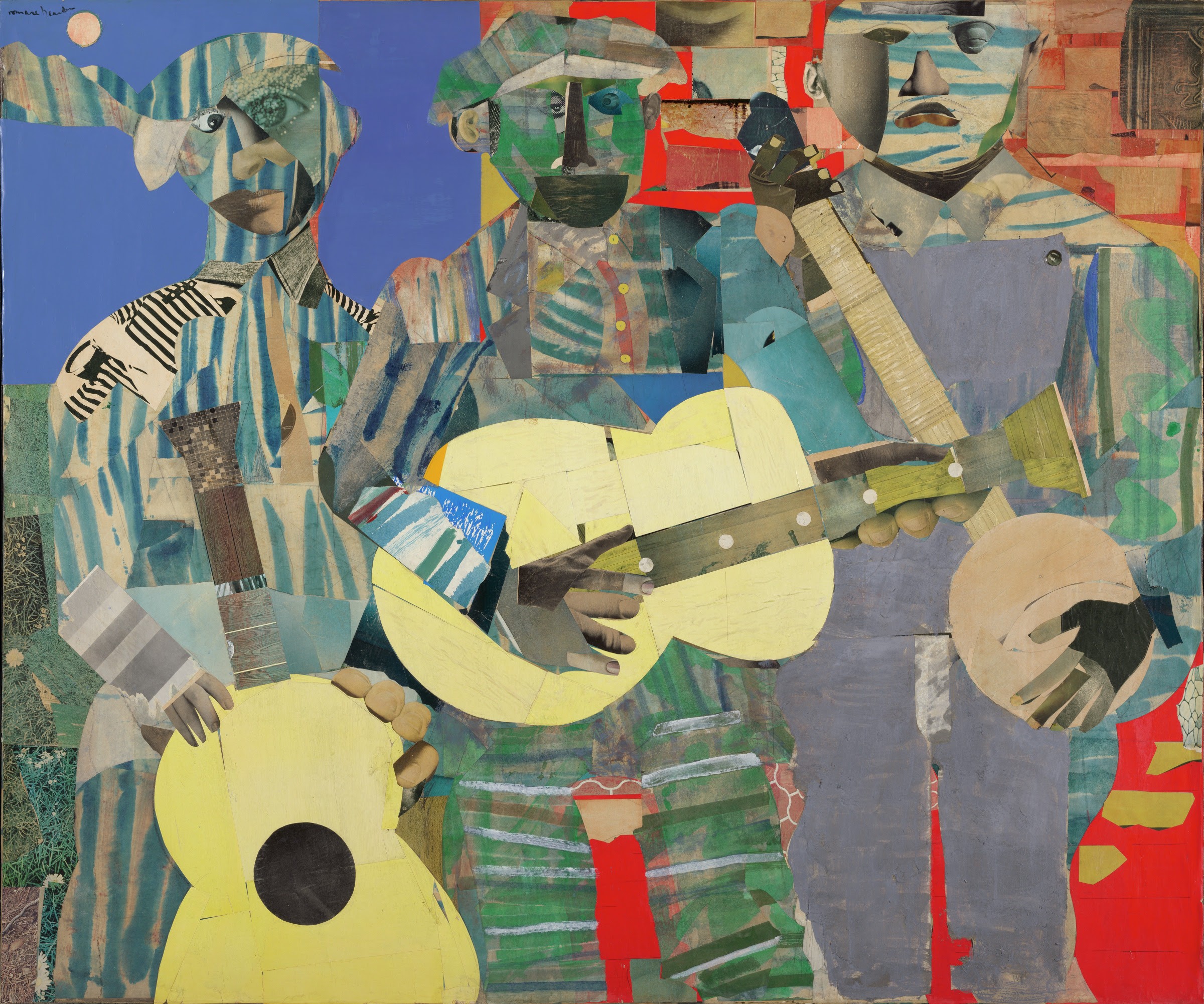 From the press release desk: VMFA has acquired one of the better known works by African-American artist Romare Bearden (1911-1988) for its mid-to-late 20th Century Galleries on the museum's second floor.

According to a press release from the museum: “Three Folk Musicians is as culturally relevant as it is formally beguiling,” Mazow said. “It appeals to us for aesthetic reasons, as well as its connection to cultural and social issues.”

“It is impossible to tell the story of 20th century American art without a 1960s collage by Romare Bearden. Not only does Bearden engage and synthesize many key art historical strands and movements from the first half of the 20th century – such as Cubism, the Harlem Renaissance, and Abstract Expressionism – but countless artists working today cite his work as a major influence,” Eckhart said in the release. “This piece will function as a bridge drawing together several areas of the collection at VMFA.”

This large-scale collage – which depicts two guitar players and a banjo player – is frequently cited in art history books and has been featured in every Bearden retrospective, including the 2003 exhibition organized by the National Gallery of Art in Washington, D.C. This work also graces the cover of Sharon F. Patton’s African American Art, which was published in 1998 as part of the Oxford History of Art series from Oxford University Press.

“This monumental collage painting is a landmark addition to our collection,” said Alex Nyerges, VMFA Director. “Three Folk Musicians bolsters our effort to represent a diverse range of cultures in our galleries and allows us to explore a full range of American stories with rich context and a broad eye.”

After working in mixed media in the 1940s, Bearden started experimenting with collage techniques in the late 1950s, but he did not begin making the brightly colored compositions depicting African American life, for which he has become best known, until 1963. That same year, he and a group of African American artists formed a collective known as Spiral to discuss their role in the civil rights movement. Their first meeting took place just one month before they attended the March on Washington for Jobs and Freedom on August 28, 1963.

Incorporating hand-painted papers and photographs torn from magazines, Bearden’s collages of this period present complex images of African American life from multiple perspectives. As a result, they are often understood in the context of African American art and are placed in a lineage from Aaron Douglas and Augusta Savage from the Harlem Renaissance to contemporary artists like Wangechi Mutu and Mickalene Thomas. However, Bearden was also engaging with the assemblage and found imagery techniques that he shared with many artists of his generation, including Robert Rauschenberg, Jasper Johns and Andy Warhol. The initial installation of Three Folk Musicians at VMFA will therefore take place in a gallery that features important works of pop art to place Bearden’s work within the larger context of American art in the 1960s.

Scholars have identified the setting of Three Folk Musicians as the artist’s native Mecklenburg County, N.C. According to Bearden, the work also pays homage to a scene he often witnessed in his grandmother’s boarding house that he visited in Pittsburgh: “After supper, the boarders would sit in front of the house and talk, or play checkers, or plunk out ‘down home music’ on their guitars.”