Sponsors include Francis Ford Coppola, who may attend inaugural fest at the Byrd in November. 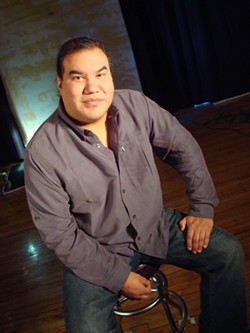 Richmond soon will be home to one of the largest festivals for American Indian film on the East Coast.

Organizers clinched the deal for the American Indian Film Festival of Virginia after an “idea meeting” on the last day of the 24th annual French Film Festival last year.

Already, the festival has attracted support from the Virginia Film Office and legendary “Godfather” film director, Francis Ford Coppola, who is tentatively planning to attend the inaugural event at the Byrd Theatre, scheduled for Nov. 17-19.

“This will be the event on the East Coast for Native American film, a high-level, red-carpeted event,” says Peter Kirkpatrick, longtime organizer of the French Film Festival, who also is advising and will serve as a board member for the new festival.

While he will serve as “distant counselor,” Kirkpatrick says, “the Native American film community and Virginia tribes have the agency in this and are bringing this to us.”

Assistant Chief Brad Brown of the Pamunkey tribe told Style there is a lot of excitement around the festival and that a majority of the 11 recognized American Indian tribes in Virginia are on board with the project.

Among festival guests will be three of the most important names in American Indian filmmaking: actor and stuntman George Aguilar, who also serves on the board of the French Film Festival; actor, director and writer Georgina Lightning, who will present her film “Older Than America,” featuring Bradley Cooper; and award-winning director and producer, Chris Eyre (“Smoke Signals”).

They also will serve as creative programming directors for the festival, which is unlike any other on the East Coast, organizers say. A free, sneak-preview announcement event in the Byrd Theatre will be held Feb. 5 from 1 p.m. to 6 p.m. featuring the main guests. "It's Super Bowl Sunday, so we will make sure we end before the game," adds Brown.

The Coppola connection stems from the legendary director reaching out to the Pamunkey tribe to use an American Indian name, Werowocomoco -- which some call the original capital of Virginia -- for a restaurant in his Virginia Dare Winery in Geyersville, California. The tribe gave permission but also mentioned the film festival coming to Richmond.

“Coppola is a big Native American history buff,” Kirkpatrick says, “so he said this was important and to please count on him as a sponsor and a couple of months ago he cut them a check.” He added that Coppola said he had circled the date on his calendar and hoped to attend the festival.

Assistant Chief Brown added that Coppola had done a lot of research on the Pamunkey tribe: "He immediately showed interest and said he would not use the name unless he had our blessing. We think its a good possibility he will be here and possibly visit Werowocomoco [near the north bank of the York River in what is now Gloucester County]."

So how did this all come about so quickly? Kirkpatrick says that Aguilar held a masterclass at last year’s French Film Festival to discuss how American Indian actors are treated on both sides of the Atlantic.

“Some of the chiefs turned out for it,” Kirkpatrick says. “We had a meeting with Andy Edmunds from the Film Office and did a Skype meeting with Georgina Lightning and Chris Eyre, about whether there would be interest [in a future festival]. So it really grew from that Skype meeting.”

Edmunds, director of the Virginia Film Office, said his organization was excited to support and promote this unique film festival that shares a point of view about a culture that is "compelling but often misunderstood."

"Filmmaking is all about point of view," Edmunds said by e-mail. "Bringing different cultures together through the celebration of cinema is always a good thing."

There are 11 recognized Virginia tribes, Kirkpatrick says, and eight have attended meetings about the festival. Style has reached out to other participants and will update this story as we hear back.