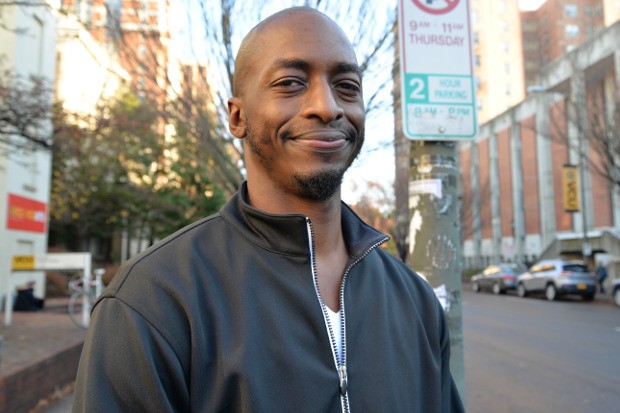 If you're a fan of National Public Radio, you know that underwriting voice: Smooth, calm, reassuring, female. And usually saying "Support for NPR comes from . . ."

Well, there's a new voice in town. As of Nov. 28, a deep, male baritone voice is being featured as one of NPR's underwriting talents. It belongs to a local instructor in the Department of African-American Studies in the College of Humanities and Sciences at VCU, Chioke I'Anson.

According to the University Public Affairs Office, I'Anson has joined Jessica Hansen as one of NPR's two underwriting voices, after attending a storytelling workshop at NPR in June to pitch his forthcoming podcast “Do Over,” which is based around the idea of traveling back to any point in time. The press release notes the idea "was one of only three shows in the country to win funding from the NPR Story Lab, NPR’s idea hub that creates pilots for radio programs, launches new podcasts and introduces new voices to the public radio network."

After I’Anson and his team gave a presentation at the workshop, Israel Smith, NPR’s director of promotion and audience development, approached I’Anson and told him that he liked the way he sounded and that they should keep in touch.

“A short time after that he had me audition and then shopped the tape around to the relevant decision-makers,” I’Anson said. “He told me the news in a morning phone call and I immediately went into a state of delirium.”

“I recorded a bank of underwriting credits in November, which began to play the week after Thanksgiving after the hourly newscast,” he added. “I get texts from friends every time they hear me telling listeners about PajamaGram.”

In addition to his work for NPR and the “Do Over” podcast, I’Anson served as community producer for the Richmond-based public radio project “UnMonumental” which launched in 2016 with VCU alumna Kelley Libby.

In the spring, I’Anson will teach a special African-American studies course on podcasting called “Podcasting While Black,” which will use the rhetorical strategies of figures such as Martin Luther King, Frederick Douglas and Audre Lorde as starting points to develop students’ broadcast “voices” that they will use in a podcast pilot they will develop over the course of the semester.

"Chioke is interested primarily in global humanitarianism and development. His dissertation is focused on the humanitarian ideologies that westerners often carry into the global south. Several philosophical perspectives are utilized in his research, including those from Black existentialism, African philosophy, and German idealism. Chioke is also interested in feminism and motorcycle studies.