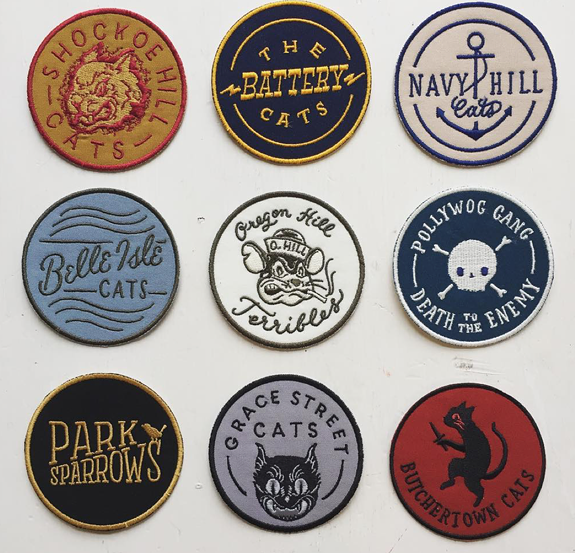 Yeah, we know. The word "hipster" has lost all meaning, but that doesn't mean they're not still out there.

If you ever read Charles Wallace’s out-of-print "The Boy Gangs of Richmond in the Dear Old Days: A Page of the City’s Lesser History" or Harry Ward's more recent, “Children of the Streets of Richmond, 1865-1920,” you know that RVA's former ruffian street kids had some awesome, sometimes ridiculous-sounding gang names.

H/t to Church HIll People's News: Now your street-fashion-coordinated, patch-wearing friend will be in cred heaven, because Clara Cline at The Wild Wander Co. has some sweet Boy Gangs of Richmond patches available.

They'll be on sale this weekend at Hardywood Park Craft Brewery for Richmond Craft Mafia's Handmade Holiday. It's a two-day event running noon-7 on Saturday, Dec. 3, and noon-5 on Sunday, Dec. 4.

The patches are all hand-lettered and will sell for $7 each, or $50 for the complete set of nine, Cline tells Style. Each comes on a card with a history of the gang on the back.

She explains that she was initially hooked on the boy gangs after reading a blog post years ago about Wallace's book. She hunted down a paperback copy of the 1938 book at Black Swan ("they're hard to find in decent condition," she says).

"I've always loved history, especially of the ephemera sort, so I was really taken by the whole idea of newsies-style shenanigans happening across Richmond," she says. "The gang names were begging for vintage baseball team style mascots, so I started sketching them just for fun. They've sat in a file for probably five years now, but for whatever reason I pulled them out a few months ago and realized they'd make great patches."

Cline says her favorite story in the book was about the Pollywog Gang. "Most of the gangs were older boys, maybe nine to 15 years old, but the Pollywogs were made up of essentially toddlers, four to 5-year-olds. In spite of their size, they took no guff and were known for being absolute little hellions, and carried a banner wherever they went that said "POLLYWOG GANG - DEATH TO THE ENEMY" flanked by tiny trumpeters. I got my eight-month-old a denim jacket and Pollywog patch so she can carry the banner of rowdy Richmond babies."

You can read our feature excerpt from Ward's book here.