Boomie Pederson on the challenge of drawing audiences. 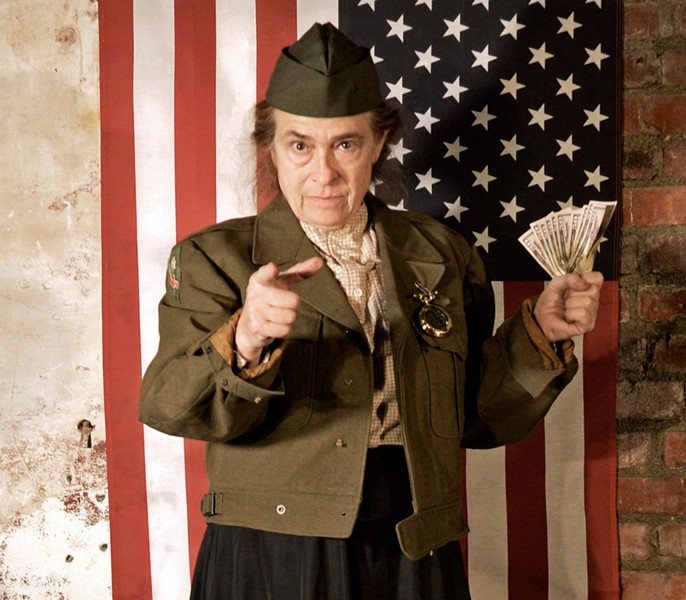 The challenge of getting Richmonders to come out to locally produced stage productions is befuddling. Attendance for traveling shows like “Wicked” or “Book of Mormon” can number into the tens of thousands, while some local companies struggle to hit a single thousand for high-quality productions featuring talented professionals.

But if it’s a challenge here, it’s an epic battle in Charlottesville. For details, you can ask Boomie Pedersen, currently starring in Bertold Brecht’s “Mother Courage and her Children” that opened this weekend at TheatreLab. Pedersen is the founding artistic director of the Crozet-based Hamner Theatre, named in honor of Virginia author and creator of “The Waltons” TV show, Earl Hamner.

When I ask Pedersen about the current status of the company, she says, “Well, that’s a complicated question.” Founded in 2005, the Hamner operated out of the Rockfish Valley Community Center in Nelson County and became known for its annual production of Hamner’s “The Homecoming.” Pedersen and her co-founder Peter Coy also championed the development of original work, specifically through the Virginia Playwrights Initiative.

But drawing both audiences and community support was a constant struggle. “We were looking to people who were regulars at Wintergreen resort to be patrons and sponsors,” says Pedersen. “But we found out that they really didn’t give a damn about theater.”

In 2012, the company had to leave the Community Center and began touring local wineries and parks with Shakespeare productions. Last year, Pedersen decided to enroll at TheatreVCU where she is now an MFA candidate in Pedagogy and Performance and also teaches classes. “People still send me scripts,” she says. “After I complete graduate school, I hope to get the company started back up again.”

Until then, she’s living with one foot in Charlottesville and one in Richmond. Pedersen first appeared here in Richmond Triangle Players’ 2015 production of “Angels in America” and relishes the chance to play Brecht’s Mother Courage, which she calls “a real gift to an actor. I know it’s cliché but it really is an amazing role.” Set during Europe’s Thirty Years’ War from 1618-1648, the play follows Pedersen’s character as she tries to profit from the war but ends up endangering her children in the process. “She’s an epic character that’s not really just a human being,” Pedersen says. “It’s a part with a lot to say and it’s been interesting to discover how much of the play is applicable to today.”

She’s also the only actor in the cast older than 50, an interesting twist since her MFA thesis involves aging and art. “I call it my ‘grumpy old men doing Shakespeare’ project,” Pedersen says. “I’m going to stage ‘Comedy of Errors’ with older men playing all of the parts. I want to look at ageism but also at how people find themselves as they get older.”

With her thesis as well as with “Mother Courage,” she hopes the work gets audiences asking questions: “If theater can’t start a conversation, all is lost.”

“Mother Courage and her Children” runs through Nov. 12.

By the Way: Savannah Hatcher, who plays Mother Courage’s mute daughter, Kattrin, is making her professional theater debut in the show. She owns her own music studio and plays original music she wrote throughout the production.

On Deck: Continuing the focus on political history among local companies, Quill opens the Sondheim musical, “Assassins,” on Nov. 4.