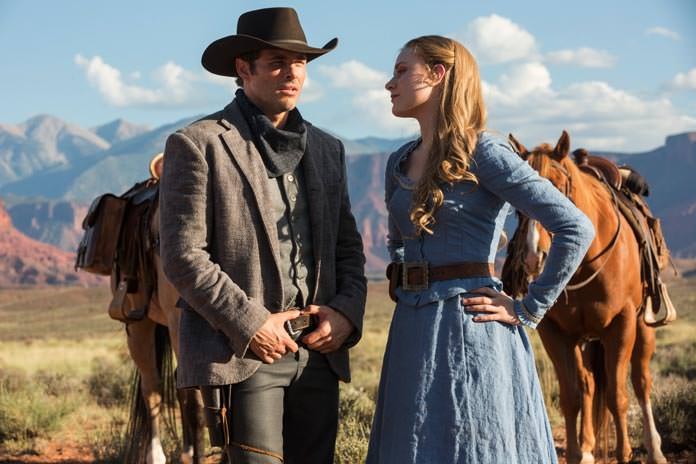 Beneath the brutal violence of HBO’s new series “Westworld,” a staff plays God with clients ("guests" or "newcomers" as they're called) in a digital-reality theme park run by a corporation. The show, Jonathan Nolan and Lisa Joy's revisit of Michael Crichton's 1973 sci-fi hit, introduces a new route west, through neurons rather than highways, spurred by the same sentiments that drove the 19th century American West: life, love and playing without rules.

Without any new outward American geographical West to attend beyond the beaches of the Pacific Ocean, the show looks inward, into the mind of the viewer and into the repairable minds of the theme park’s hosts -- robots on the verge of rebellion, coming to terms with their own existence in an almost spiritual way.

Artificial emotion -- not artificial intelligence -- fuels the narratives spun by the park’s creative director, Robert Ford (Anthony Hopkins) and his assistant programmer, Bernard Lowe (Jeffery Wright). The lawless park delivers to high-paying guests whatever they fancy: murder, treasure trails and prostitution. The guests are legion, as are the profits.

Also there’s a grim visitor who has been frequenting the park for 30 years - known as the Man in Black (Ed Harris); Dolores Abernathy (Evan Rachel Wood), the farmer’s daughter caught lying to programmers; and a mysterious, handsome host killed and repaired three times in the show’s first two episodes, whose name we do not yet know. Such omissions of plot material are common in Nolan’s productions, but can add some early confusion.

Between Nolan's lifetime obsession with psychological thrillers and Crichton's tendency to end his tragedies with technology undermining humanity, it may surprise no one when chaos erupts in the fictional theme park later in the series. Most significant is the obvious foreshadowing phrase from "Romeo and Juliet" whispered into Dolores’ ear in episode two: "These violent delights have violent ends.” While the guests are promised they cannot be hurt by hosts, this moment prompts suspicion and recalls Crichton’s devices from the similarly-designed “Jurrasic Park.”

With a no-limit budget and one of today's most talented cinematographers (Paul Cameron), the show delivers breathtaking natural landscapes and fluid, smooth transitions between the series’ only other setting, the highly advanced, spaceshiplike controls of the corporation and its rows of bodies in various states of repair.

A talented cast, led by veteran star Hopkins’ standout performance as the godlike Ford, makes it easy to forgive the scattered script and sometimes difficult-to-follow narratives woven by Nolan and Joy. Ford, the mysterious, brilliant designer of human emotion, seems set to act as foil to the villainous Man in Black, who is all too eager to reach into Ford's imagination for the "deeper levels to this world." The Man in Black scalps his victims, looking for clues written on the insides of their skulls, ending the lives of characters created by Ford and creating dysfunction among the hosts. Is the Man in Black at odds with Ford, or is he perhaps the owner of the park? We don't know yet.

Like most of Crichton’s work, the show is yet another entertaining warning to humanity that artificial intelligence can be a serious threat, made more threatening by artificial emotion and the profit motive behind modern technologies crafted in today’s American West.

"Westworld" airs on HBO on Sundays at 9 p.m.